"They were on another level that I generally couldn't answer really in most of those laps," says Lewis Hamilton as Max Verstappen takes three-point title lead by winning his maiden home race at Zandvoort

Lewis Hamilton said Max Verstappen and Red Bull were "on another level" at the Dutch GP, as the "faultless" home hero took victory to retake the championship lead off the Mercedes driver.

Hamilton's three-point title advantage has turned into a three-point deficit to Verstappen after his impressive win, one that Hamilton "gave everything" to prevent - sticking close behind for the majority of the race.

But Verstappen and Red Bull appeared to have Hamilton and Mercedes covered whatever they tried, to the delight of Zandvoort's sea of orange

"I was just trying to keep as close as possible but I tell you, he was fast today," Hamilton told Sky Sports F1 afterwards. "They were on another level that I generally couldn't answer really in most of those laps."

While the margins are so small - Hamilton was only just beaten to pole by Verstappen and had similar, if not identical, pace in the race - the seven-time champion believes Red Bull's upgrade package has made a difference.

"They put an upgrade at the last race and [wow], they're quick," he said. While the Englishman doesn't believe Mercedes have upgrades of their own in the pipeline, he also urged his team to respond to Red Bull's improvement.

Could Hamilton have had a chance of win with better strategy?

While Hamilton felt Verstappen was ultimately "just too quick" on Sunday, he also questioned Mercedes' strategy during the race.

Hamilton was particularly puzzled by the decision to pit him for a second time earlier than planned, a move which sent him back into the traffic of lapped cars and gave Verstappen breathing room for his stop.

"I definitely think that wasn't our best strategy," said Hamilton. 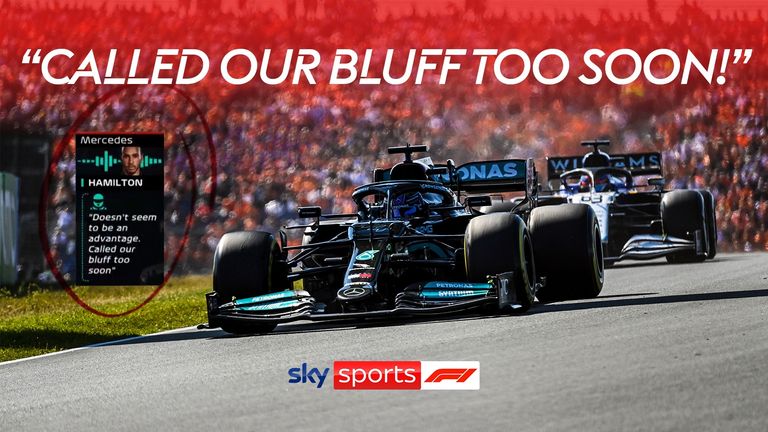 "I'd lost a good second off him and I needed to try and close that gap back up to do the stop. And then I came out behind traffic... so I couldn't actually implement and I don't know how they didn't see that."

He continued: "We had to be perfect to even have the slightest chance of getting past him through strategy for example. Pitstops needed to be on point, strategy on point, traffic, also. But none of those three were ideal today."

"When you have the quickest car on track, whatever you try on track is difficult," said Wolff. "Credit to him, credit to Red Bull, they were absolutely faultless today."