Lewis Hamilton taking a new engine and starting at the back of the grid for Turkish GP is "a possibility", says Toto Wolff; Hamilton's title rival Max Verstappen took penalty in Russia and recovered from 20th to second behind Mercedes driver 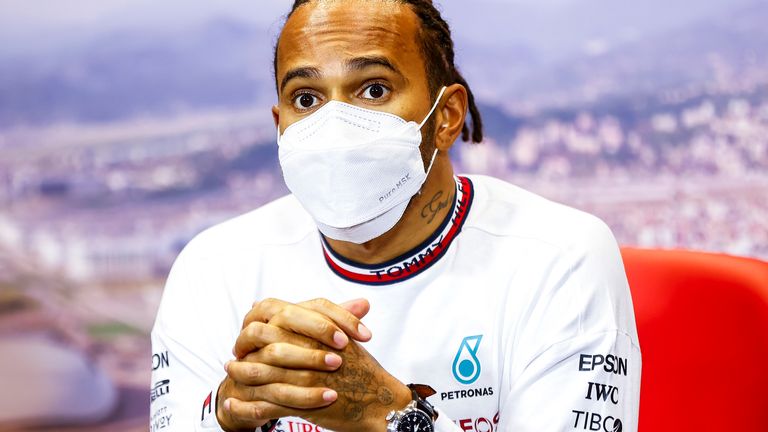 Mercedes have admitted that Lewis Hamilton taking an engine penalty for this weekend's Turkish GP is a "possibility" as they look to avoid reliability failures in the championship battle against Max Verstappen.

Hamilton has raced with three engines so far this season - the maximum permitted in F1 - but with seven races remaining in the 2021 season there is a strong chance he will need a fourth, which would send him to the back of the grid for the race where he first uses it.

"It's a possibility," said the Mercedes boss, although he also cautioned: "When, and how, is not yet decided."

Red Bull took their new engine and penalty for Verstappen at the Russian GP, with the Dutchman recovering from 20th to a remarkable second place behind Hamilton, who only has a two-point title advantage as a result.

"Most important is that you don't DNF because of a reliability issue," admitted Wolff. "You can cope with swings, whether you finish second, third, I think that is OK, the championship is going to go long. But if you don't finish...

"So we are looking at the parameters of the engines, making sure we don't suffer from any reliability problems."

This weekend's Turkish GP - live only on Sky Sports F1 - is expected to be wet and is only the second at Istanbul Park since 2011 after the sport returned to the circuit last year amid the coronavirus pandemic.

Hamilton won last year's wet race to clinch his seventh world title, and will be aiming to shine again this weekend in his bid to move another step towards a record-breaking eighth.

"Lewis has been tremendous there," said Wolff. "But we have to take each race at a time. It's so difficult, the cars are so close. I'm curious to see how this championship evolves."

Hamilton ahead but admits: We've not taken our chances

Hamilton may have won the Russian GP and re-taken the championship lead, but that buffer is only two points from Verstappen after his incredible comeback.

Speaking after that race, Hamilton expressed his belief that Mercedes had not made the most of the opportunity to move further clear of Red Bull and Verstappen, given their big car disadvantage at the high-speed Monza and Sochi.

"It's not only the two races, there's been plenty of races where we've not maximised, as a team, collectively, both drivers and everyone but we're still in a fight and we can continue to improve," said Hamilton.

"There are definitely things that we will try and do better moving forwards but we just won't give up, we'll just keep trying, keep pushing, remain hopeful and just do the work."

Many of the remaining circuits on the calendar are expected to suit Red Bull more, starting with this weekend's Turkish GP.

"Well, undoubtedly it's going to be tough," added Hamilton. "I think, for two thirds of the season so far they've had the edge. However, it's obviously been difficult with all sorts of things, curve balls sent to both of us and our teams.

"There's still everything to play for in these next races. I think they've got a good set of circuits coming up and I anticipate or just continue to be really close between us. Just got to be hopeful of some good races."

"This was the place where Hamilton clinched his record-equalling seventh world championship in a wet race.

"We're expecting rain more likely Saturday than Sunday so it'll be interesting to see how that affects his prospects. There's every chance of Hamilton starting from the back this weekend because he needs to take an extra engine - that's the reality between now and the end of the season.

"That would exceed his quota and gain him a penalty. It's what Max Verstappen had to go through in the last race in Russia.

"These are significant times for Lewis. His 100th win last weekend, and if he wins here this weekend, he would equal the nation of Brazil in terms of F1 race victories.

"When you think that includes his idol Ayrton Senna, Nelson Piquet - a three-times world champion - and Emerson Fittipaldi, it shows you that Hamilton is a class apart along with Michael Schumacher on 91 wins.

"He's a genuine history-maker, and he is making history week in, week out and year on year."