"Undoubtedly we've got to do a very deep analysis of all the events that occurred because there are a number of things that shouldn't have happened," says Formula 1's Ross Brawn; FIA and F1 to analyse what happened when Grosjean's car pierced the barriers, split in half and caught fire

Formula 1's authorities have started their investigations into Romain Grosjean's violent accident in the Bahrain GP, with Ross Brawn saying there were "a number of things that shouldn't have happened" in the frightening incident.

Grosjean astonishingly escaped with burns to the back of his hands from one of the most horrifying crashes in recent F1 history. Striking the barrier on the exit of Turn Three at high-speed, the Frenchman's Haas car split in two and caught fire.

F1 strives for ever-improving safety standards for both its cars and circuits, and the Halo head protection device - introduced amid some controversy in 2018 - has been widely credited for saving Grosjean's life.

As is the case with all significant accidents, the sport's officials are therefore determined to learn more about what happened in Sunday's in order to make further improvements.

Speaking to Sky Sports F1, FIA race director Michael Masi said: "We will look at it all and undertake a full investigation of the whole incident, and what we can learn.

"Be it car safety, be it driver equipment, be it safety features around the circuit.

"The survival cell did exactly what it was there to do. It kept the driver safe.

"But we'll review the incident itself and see if there's anything that we can learn in the short term. But, certainly, from the barrier integrity and so forth, there's no knee-jerking to it." 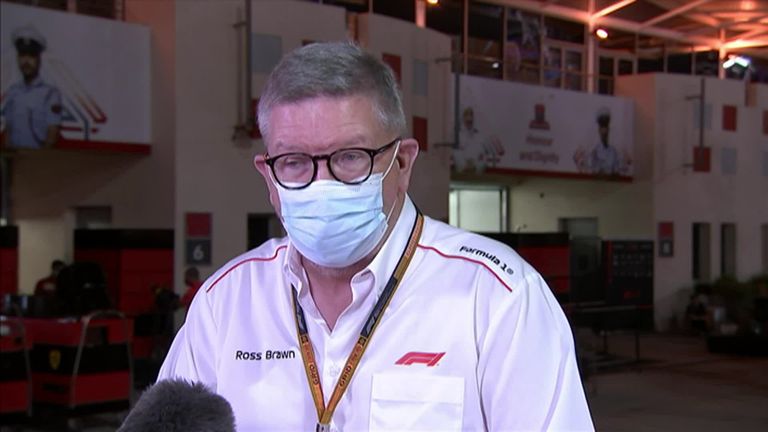 Brawn, F1's director of motorsport, said there were several concerning aspects to the aftermath of the Haas car's impact with the metal barriers.

"Undoubtedly we've got to do a very deep analysis of all the events that occurred because there are a number of things that shouldn't have happened," Brawn told Sky F1.

"The fire was worrying, the split of the barriers was worrying. The positives are the safety of the car and that's what got us through." The nature of the crash will now be analysed in detail.

"It was quite a high G [force] load as well so we've got to look at how everything failed because everything is designed to fail in a progression," he said. "But a crash that catastrophic obviously things failed in an unpredicted way. The car came apart, we had a fuel fire which is something we haven't had for a very long time - the fuel cells are incredibly strong."

F1 races on the Bahrain circuit again this week for the Sakhir GP, although the second race features a shorter but faster configuration.

"But it's something we haven't seen for a very long time. I think the safety standards at the circuits are exceptional but today we saw something we didn't predict." 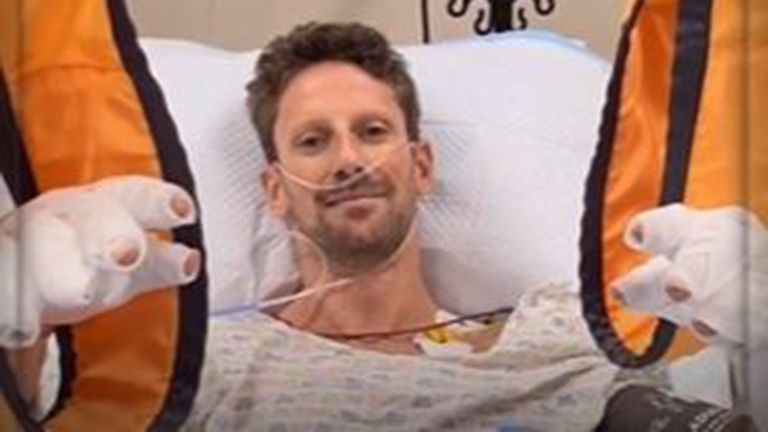 The Haas driver spent Sunday night in hospital as doctors continued to treat burns to the back of his hands.

Appearing in good spirits, the Frenchman thanked medical teams at both the circuit and the hospital - and credited the Halo for allowing him to walk away from the accident.

"Hello everyone, just wanted to say I am okay... sort of okay," he said, as he waved hands heavily wrapped in bandages.

"Thank you very much for all the messages."

"I wasn't for the Halo some years ago but I think it's the greatest thing we brought for Formula 1, and without it I wouldn't be able to speak to you today.

"Thanks to all the medical staff at the circuit and at the hospital and hopefully I can write to you quite soon some messages and tell you how it's going."

On Monday morning, he posted a further Twitter messaging thanking team-mate Kevin Magnussen for his well-wishers.

Haas have said Grosjean's treatment is "going well" and expect him to be discharged from hospital on Tuesday, although they have already confirmed that the 10-time podium finisher will miss this Sunday's second race in Bahrain and be replaced by Brazilian rookie Pietro Fittipaldi.