Lewis Hamilton reflects on Brazil punishment and epic fightback in the Sprint, which means he starts race from 10th; Martin Brundle: "He can win from there"; watch Sunday's Sao Paulo GP live on Sky Sports F1 at 5pm

Lewis Hamilton will be looking to complete a remarkable turnaround to keep his championship hopes alive in today's Sao Paulo GP, with Red Bull insisting he "can win" ahead of Max Verstappen from 10th on the grid.

It has been a rollercoaster weekend for Hamilton but he made a dazzling and overtaking-filled charge in Brazil's F1 Sprint, fighting back from a "devastating" qualifying disqualification as he made up 15 places in just 24 laps after starting 20th - enforced due to a Mercedes DRS breach on Friday.

Hamilton will drop five places to 10th for the Sao Paulo GP - live on Sky Sports F1 at 5pm - due to his engine penalty, but given his speed in the Sprint will likely be a worry for the Red Bulls, who have championship leader Max Verstappen starting only second behind Valtteri Bottas.

And team boss Christian Horner admitted: "Lewis' pace he had, he can win this race. It would be very hard to defend against him with that kind of pace. We've got to get our head down, do the best job we can and go from there."

Sky F1's Martin Brundle agreed. "Hamilton will start 10 positions higher up [than he did in the Sprint], and the race is three times longer," he said. "He can win it from there."

Hamilton is 21 points behind Verstappen in the title race with Sunday's Sao Paulo GP the first of four races to finish the season. 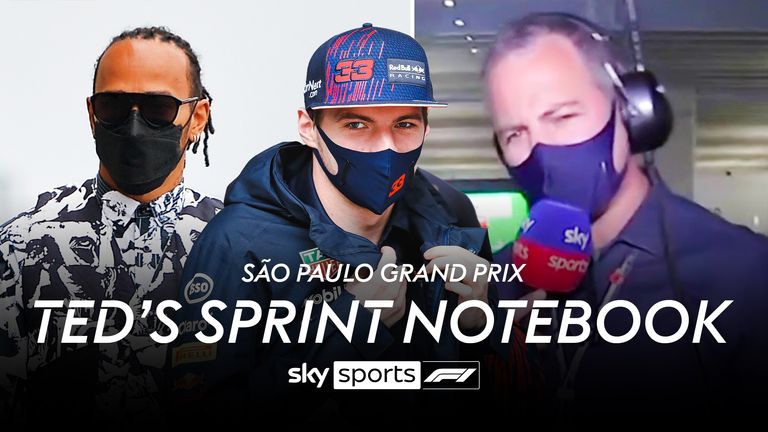 Hamilton says he "used a lot of things to fuel" his Sprint charge to give himself an unexpected opportunity for Sunday's race.

Speaking after his comeback - which was capped off with a super overtake on Lando Norris on the final lap - Hamilton told F1 he was "overwhelmed and "definitely wasn't expecting that".

"I honestly had no idea what was possible," he then told Sky F1. "I didn't set a limit or a maximum.

"I think when I was at the back of the grid before the start, before we pulled away for the formation lap, I think I might have been able to see 10th and I was like that's my goal, got to try and get as far up as I can.

"All of a sudden I was shipping away much faster and I really used a lot of different things to fuel today. You can't give up, you've got to keep pushing."

Mercedes boss Toto Wolff admitted the world champions' weekend was "certainly more encouraging than it looked" and said of Sunday's race: "I believe we have a good car here. We've seen over 24 laps definitely we didn't suffer with the tyres.

"Tomorrow that is a different game again because it's going to be much hotter. But at least it's encouraging to see we can overtake."

Hamilton also explained the emotions of his and Mercedes qualifying disqualification, as his pacesetting Friday qualifying time was scrapped after his W12 car's DRS on the rear wing was found to have contravened technical rules.

"It was definitely tough," said Hamilton, who learned he would be starting the Sprint 20th and not first just two hours before lights out.

"While the team were working away with the stewards I was just trying to focus on my work with my engineers, keeping the morale with my mechanics high and focusing on the job on hand, not thinking about it

"Of course just before, I heard about the result - and it was devastating - but you can't let that hold you back, you've got to keep your head down and keep going, and I quickly reset, got my mind focused on doing what I can do and giving it my everything."