Lando Norris: Assessing the growing momentum behind a rising F1 star after a storming start to 2021

Behind only Lewis Hamilton and Max Verstappen in the championship, Lando Norris has made an excellent start to his third season of Formula 1. Mark Hughes assesses the impressive career trajectory of McLaren's rising British star ahead of this weekend's Portuguese GP

The great F1 potential of Lando Norris has been apparent right from the start.

The peaks were quite special even if in his first two seasons he didn't manage to hook them all together seamlessly. This is just a normal rookie pattern but it was spot-lit in Lando's case by him arriving with a fairly good car in a high-profile team and with a very sharp and experienced team-mate in Carlos Sainz to be measured against. There wasn't anywhere to hide - and that spotlight sometimes exposed his inexperience.

Compare that to George Russell or Charles Leclerc, two of the other outstanding young talents to reach F1 in the last three years. Both arrived in uncompetitive machinery - particularly Russell in 2019 - of which nothing much was expected and with unknown quantity team-mates.

Russell was paired alongside Robert Kubica, a truly great driver in his time but bravely returning to F1 after a seven-year absence and impaired functioning of one arm. Leclerc's debut season was at Sauber in 2018 alongside Marcus Ericsson.

Russell and Leclerc each managed to impress mightily despite the limitations of their machinery - but that merely gave an outline of their level, not really their consistency because even on a bad day they could usually manage to squeeze out an advantage over their team-mates. That was a luxury denied Norris by the relentlessly polished all-round excellence of the quick and experienced Sainz in 2019 and '20, respectively his fifth and sixth years in F1.

The smallest shortfall in Norris' performance would be exposed - and this was happening further up the grid, courtesy of McLaren, and therefore more visible.

Into his third year in the team, with Sainz flying the nest, Norris has come into 2021 perfectly placed to make good on all that promise.

His data banks are nicely full now and there's a new dynamic given that he's the incumbent at McLaren and the super highly-rated Daniel Ricciardo is new to it. In the first two races of the season Norris has capitalised on that situation almost perfectly, with an immaculate drive to fourth in Bahrain, putting a no-nonsense first lap pass on Ricciardo and leaving him behind (helped by Ricciardo's car taking subsequent damage from Pierre Gasly).

He followed up with that stunning drive to third at Imola. There, but for having his new-tyre Q3 time disallowed for being 3cm over the track limits at Piratella, he'd have qualified third within less than a tenth of Lewis Hamilton's pole. Ok, so maybe a few hundredths of that was in the infringed track limit, but no more than that.

The McLaren was not in the same race as the Mercedes on Sunday, just confirming that qualifying lap as something very special. It was 0.35s faster than Ricciardo and even the used-tyre time Norris had to fall back on for his grid position was only a few hundredths slower than Ricciardo's new-tyre time.

After being given free passage past Ricciardo in the race, Norris put half-a-minute on him and after getting the jump on the harder-tyred Leclerc at the restart, proceeded to judge beautifully his dice with the recovering Hamilton, knowing it was inevitable the Merc was eventually coming past, but not making it easy, all the while ensuring he wasn't losing time in the battle. 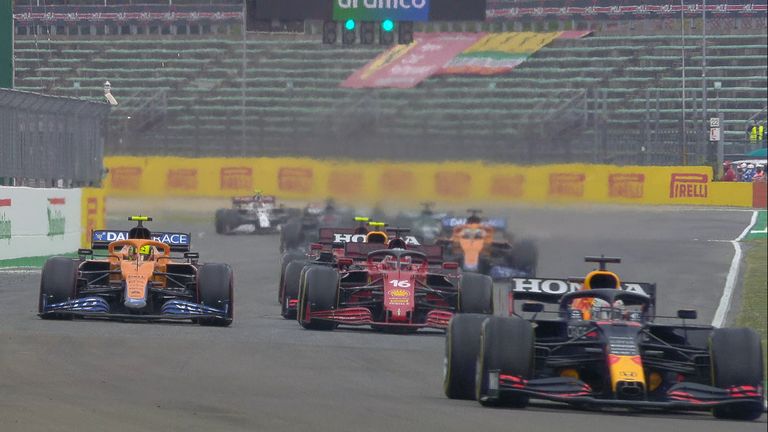 That was a world-class performance and sets the bar for Ricciardo as he continues to adapt to the very different traits of the McLaren after two years at Renault.

It's only been two races but Norris can absolutely hold his head up in comparison to Verstappen, Hamilton and Leclerc in the drives he has delivered so far. He has the momentum with him which can often bring out the confidence that converts a promising driver into a genuine superstar.