Robert Lewandowski had just one year remaining on his Bayern Munich contract and had told the German champions he would not sign a new one; Lewandowski will fly to Spain on Saturday for a medical before signing a three-year contract; Julian Nagelsmann's side keen to sign Matthijs de Ligt

Barcelona have agreed a deal with Bayern Munich for the signing of striker Robert Lewandowski for £42.5m (€50m).

Lewandowski is still in Munich and will fly to Miami on Sunday, where Barcelona will begin their pre-season tour, for a medical before signing his three-year contract, which contains an option for a further 12 months.

The Poland international had just one year remaining on his Bayern contract and had told the club he would not renew his deal.

"I didn't have much time to prepare for it. It all went very quickly to say goodbye to everyone!" Lewandowski told Sky Germany after agreeing his move.

"These eight years were special and you don't forget that. I had a great time in Munich.

"I will fly soon but after the training camp I will come back and say goodbye properly and organise a few things. I said goodbye to the boys on the field today, I wasn't worried about an injury in training. Something can happen to me at home. I wanted to keep fit and trained with the boys again."

Up until now the German champions had insisted Lewandowski was not for sale and turned down a €40m (£33.8m) offer from Barcelona last month.

However, Lewandowski's departure would help Bayern to finance the signing of Matthijs de Ligt from Juventus, who have priced the centre-back at around €80m (£67.7m) plus bonuses, according to Sky in Italy.

Hasan Salihamidzic, Bayern's sporting director, was in Turin on Monday to open negotiations for De Ligt with Juventus. The Dutchman has two years remaining on his Juve contract and is reported to have told the Italian club he is keen to move to Munich.

Chelsea have also been tracking De Ligt this summer as they try to replace Antonio Rudiger and Andreas Christensen, who both left on free transfers but are set to complete a deal for Kalidou Koulibaly.

Lewandowski: The numbers do not lie

Lewandowski has been with Bayern since 2014 and has scored 344 goals for the club in 375 appearances across all competitions.

He has helped Bayern to eight Bundesliga titles in the last eight seasons, as well as three German cups, and has just been crowned the league's top scorer for the fifth season in a row after netting 35 goals in 34 Bundesliga games in 2021/22.

"Xavi desperately wants a world-class striker who can guarantee 30 or more goals a season. A two or three-year contract is in the making with a salary of about €35m to €40m (£30m to £34m) a year.

"Barcelona are not able to pay high fees but high salaries. It was always a dream for Lewandowski to play in Spain - either Real Madrid or Barcelona."

'Lewandowski is a pure goal machine' 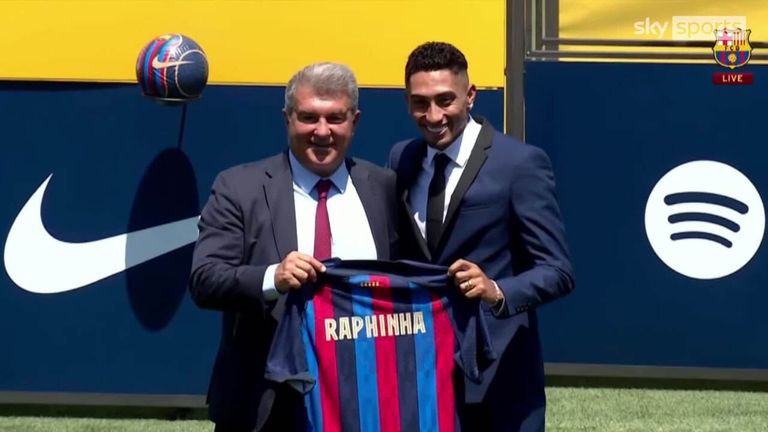 "It is not signed - both camps are briefing it is done, Lewandowski has not said to Bayern Munich for several weeks now 'I'm not coming back, it does not matter what you do.'

"He also told his agent, Pini Zahavi, to reject overtures from PSG and Chelsea to get this deal over the line.

"So until it is signed, there should be a little bit of caution, but we can take it that it is going to happen.

"Since Xavi has taken over, Barcelona have been scoring for fun and now they have added Raphinha, Dembele is staying, Feran Torres, Aubameyang and now Lewandowski, who has scored 344 goals in 375 games for Bayern and whose passport age is irrelevant - he is 33, turns 34 in August - he plays like a 28-year-old.

"So you could argue in pure football terms, this is a pure goal machine with a good supply, but also in the rebuilding of FC Barcelona, they are bringing in an ultra professional, someone with a willing mentality.

"When a club is rebuilding, you do not just look for people with particular specialisms, but who can teach and set an example to everyone else and Lewandowski is that man."