Transfer news, rumours and gossip from Anfield ahead of the 2023 January transfer window; the window opened on Sunday January 1 2023 and will close at 11pm on Tuesday January 31

After the winter transfer window opened on January 1 2023, we round up Liverpool's done deals, plus the players linked with moves in and out of Anfield.

Gakpo is Liverpool's only January signing

Cody Gakpo was the only arrival at Liverpool this winter, joining from PSV Eindhoven in a £45m deal at the start of the month.

Liverpool boss Jurgen Klopp ruled out any late business in the January transfer window just before it shut.

Speaking after the holders were knocked out of the FA Cup with defeat at Brighton on January 29, Klopp said: "No, nothing will happen in this transfer window. That's it, all good."

Carra: Reds will make up for lack of business in summer

Jamie Carragher sympathises with the Liverpool fans' frustrations over the club's inertia in January, he is also keen to point out that the club's owners like to wait until a particular target becomes available, in a model that has become the envy of Europe.

"Medically wise, they have had a really bad season in terms of injuries," Carragher said.

"In terms of transfers, I can understand the frustrations of Liverpool fans when they see other clubs spending left, right and centre, and because Liverpool are not bringing someone in, it almost looks like they have given up on that fight for the top four.

"But what I would never want my club to be, which is what they were when I was a player, is a little bit scattergun, panicking at different times, whereas Liverpool over the last four or five years have been a model that other clubs around Europe have wanted to follow.

"And what they do not do is panic in the transfer market, and I think Jurgen Klopp has shown that before when he has had really successful buys that he has brought in, like Virgil van Dijk, who he waited for before bringing in.

"If Liverpool are not bringing players in now because they have not got the money, or the player is not there that Klopp wants, that is a completely different argument that we do not know, we are not privy to that information."

Carragher, however, says it is unfair to criticise FSG for failing to strengthen in midfield when they tried to bring in Aurelien Tchouameni from Monaco and would have moved for Jude Bellingham had Borussia Dortmund shown any interest in selling the England international last summer.

Bild TV presenter Valentina Maceri gives insight into a potential move for Harry Kane to Bayern Munich this summer and will Bellingham leave or remain at Borussia Dortmund?

As a result, the former Liverpool defender believes the Americans will make up for their recent lack of spending by splashing the cash this summer, with the Reds reportedly still pushing to sign Bellingham.

"I am convinced Liverpool will have a big summer, I am sure a lot of fans want them to have a big January, but I would not want Liverpool to go back to what they used to do when I was playing where you would be buying players and hoping that it would work," he added.

"That does not mean I am right, or the club is right, in terms of Klopp, but I think it got to last summer and they were well aware of what they needed to do in midfield and they tried to sign Tchouameni and he went to Real Madrid.

"I think Liverpool were at the stage last summer they almost won four trophies and they were in the Champions League final, so they were probably thinking that for us to bring in a player, they need to be special, and they felt Tchouameni was that player and he goes to Real Madrid.

"It is obvious they have been working on the Jude Bellingham transfer for a long time. They [Dortmund] were not going to sell him last summer, so maybe they thought let's wait till this summer, and this midfield can get us through. 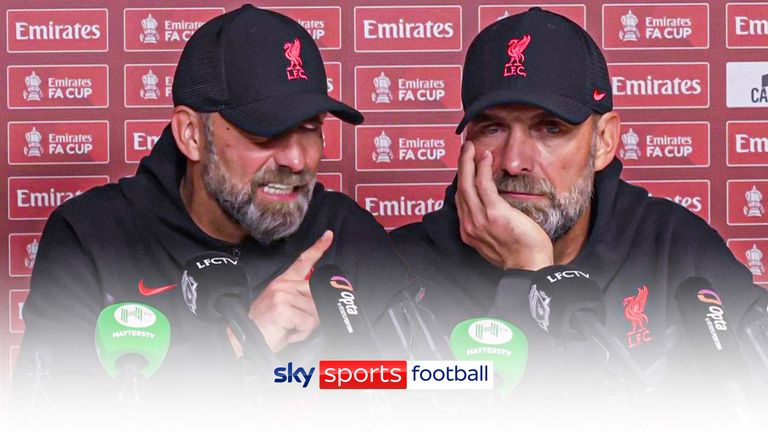 Jurgen Klopp rejected the suggestion that his side were 'falling apart' in the closing stages of their FA Cup defeat to Brighton.

"And I have said it before, it has just blown up in their face and, yes, it is their job to see these things before they happen, and they have got that wrong, there is no doubt about that. But I can understand it, so I am not going to be massively critical of them for not bringing in a midfield player in the summer because the two players they wanted were not available.

"And that goes back to my point that Liverpool and Klopp throughout all his time at Liverpool wants to get the player that he wants and not just to bring a body in. Listen, a body could work, a player could come in and change things, I am not denying that.

"But their track record over the last five or six years and how they have gone about it has worked more often than not, so for the time being I am prepared to bide my time until the summer."