Antonio Rudiger has decided to leave Chelsea, Blues boss Thomas Tuchel confirms; the Germany international's contract at Stamford Bridge expires next month; Real Madrid, Manchester United and PSG have been linked with the 29-year-old, while his agent met with Barcelona officials last month

Thomas Tuchel has confirmed Antonio Rudiger will leave Chelsea in the summer.

The defender, who is approaching the end of his contract, has been linked with Real Madrid, Manchester United and PSG, while his agent met with Barcelona officials last month over a potential summer move to the Nou Camp.

Reacting on Instagram to Sky Sports' post regarding the news, former Chelsea captain John Terry replied: "How have we let this man go."

Speaking to Sky Sports after Chelsea's 1-0 win over West Ham, Blues boss Tuchel confirmed: "The situation is that he wants to leave the club. He informed me of this in a private talk.

"We gave everything - me and the club - but we could not fight anymore because of the actions. Without the sanctions we would at least be able to carry on fighting, but our hands are tied. We don't take it personally. It is his decision.

"He is a key figure and will stay that way until the end of the season. But it is disappointing. We will miss him a lot. He gives courage in the dressing room. The kind everyone is afraid of, but the kind to play 50-55 games at an outstanding level. He is a top defender in the last one-and-a-half years for me. We then need to find another solution."

In the press conference that followed, Tuchel confirmed the decision was not a factor in his absence at Stamford Bridge on Sunday.

"He's injured. No concerns from him," he added. "It's a groin and in the other leg a bit hamstring. He is somebody who plays through pain anyway. It's not even an injury and he feels insecure. He'll come back to training on Tuesday ahead of Thursday.

"He has no doubts and he made no doubts that he will play until the end of the season. This is what he did from day one and this is what he'll do for the last minute."

And pressed on whether the Blues will be able to replace Rudiger after his departure, Tuchel said: "In the moment not, because of the sanctions. Hopefully the sanctions will be the past.

"We had a connection from day one and he deserves my full support. I'm just happy to have had the chance to coach him in the team and the club did as well. We had offers, big offers and the club tried everything but we cannot fight anymore. We have the sanctions, we can't continue. It is what it is.

"It would be ideal [for sanctions to be lifted before the transfer window] but even if we wish for it, you can't pull grass for it to grow faster. We have to deal with what the reality is. The sanctions are still in place and the situation is not cleared for next season. We try to focus on the last weeks."

Rudiger's calmness will be missed by Chelsea

News that Rudiger is leaving Chelsea is far from a shock. This was not a bolt out of the blue for Blues boss Tuchel.

Sky Sports News has been reporting since the turn of the year that the German defender has been speaking to other clubs, including the likes of Real Madrid, Barcelona and Bayern Munich, over a pre-contract agreement which would result in a free transfer.

The problem Tuchel now faces is how to replace his compatriot - if he can. There's a race against time for Chelsea to officially complete their takeover by the time the summer transfer window starts. New owners need to be decided, Government approval is needed, and that's before the conversation about what funds are available even begins.

Finding a player that can match Rudiger's standards over the last 18 months will not be easy.

The centre-back was brought back into the Chelsea starting line-up when Tuchel arrived at Stamford Bridge in January 2021, after enduring a fraught relationship with former boss Frank Lampard - who even went as far as to exile him.

Since Rudiger came back into the fold, Chelsea have won the Champions League, UEFA Super Cup and Club World Cup, victories they owe in no small part to defensive solidity.

The security Rudiger provides is evidenced by the statistic that Chelsea have conceded twice as many goals (1.4) with him out of the team, compared to when he plays (0.7). 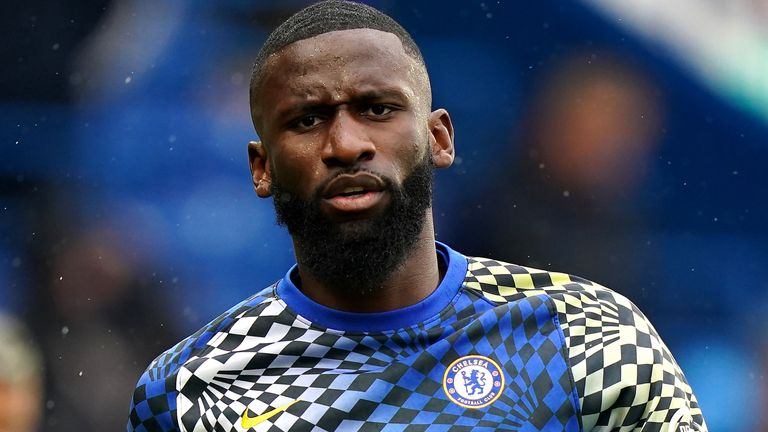 Speaking after their 1-0 win over West Ham, Chelsea head coach Thomas Tuchel confirms Antonio Rudiger has decided to leave the club at the end of the season

Against West Ham on Sunday, Tuchel's Chelsea restricted their opponents to zero shots on target in the game - but that does not tell the whole story.

Centre-backs Cesar Azpilicueta and Trevoh Chalobah - both used in a makeshift back three after Andreas Christensen was injured in the warm-up - looked sloppy in possession in defensive transitions.

Both had their pockets picked by Said Benrahma in the space of a matter of moments, and only defensive astuteness from goalkeeper Edouard Mendy and Thiago Silva bailed the pair out. How long the latter - 37 years of age - can go on will be a concern, although there are few signs of his powers diminishing.

Tuchel summed up the hole Rudiger will leave behind: "It will be incredibly difficult because Toni is what he is: a big personality, a big leader. He takes fear away and gives confidence when he's next to you, and between 50 or 60 matches [he plays] with an incredible level of consistency."