Ian Poulter on Rory McIlroy: "We all expect so much of him because he is such an incredible talent. And when someone like Rory hasn't won a major for a few years, the questions get asked. But he is one of the most motivated golfers I've ever seen"

Ian Poulter has hit out at critics of Rory McIlroy after he was unable to convert a 54-hole lead into a victory in Abu Dhabi on Sunday.

McIlroy, playing in his first event since the Masters last November, got off to a flying start with a 64 before hitting back from a difficult second day with a third-round 67 that lifted him one clear of Tyrrell Hatton.

But he could not build on a bright start on the final day and Hatton reclaimed the lead around the turn before pulling away to a handsome four-shot victory - his fourth win in his last 20 starts.

Hatton's brilliance has lifted him above McIlroy to fifth in the world rankings, but Poulter was not happy to see so much criticism of McIlroy in the aftermath, with many questioning his mental strength and his ability to close out tournaments.

"It's ridiculous," Poulter told Sky Sports News. "Rory is probably, pound-for-pound the most consistent golfer on the planet. When you look at how many top fives and top 10s he has, his record is incredible.

"We all expect so much of him because he is such an incredible talent. And when someone like Rory is a prolific winner in his early years, and then hasn't won a major for a few years, the questions get asked.

"But Rory McIlroy is one of the most motivated golfers I've ever seen, and one of the most professional. He's extremely knowledgeable about the game of golf, and about his own game, and he's always looking to make improvements. 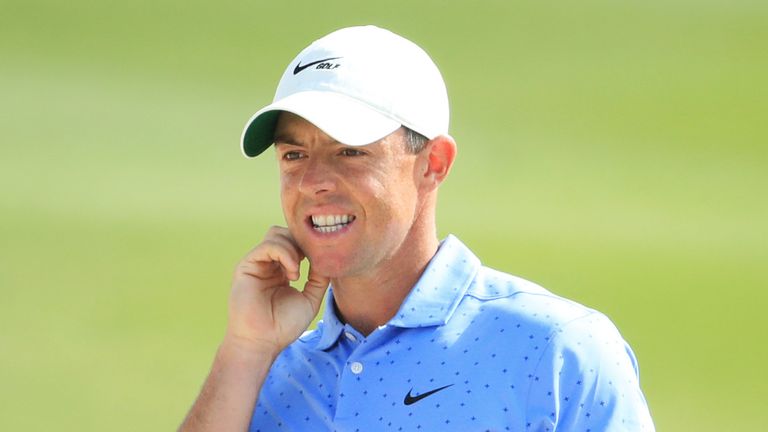 "I guess it's hard being in his position, when there are huge expectations and none more so than the expectations he has of himself. So finishing third in Abu Dhabi is probably a disappointment for him when he was leading going into Sunday.

"But it was still a third-place finish, it's not like he completely blew up and finished outside the top 10. He is one of the most consistent players we've ever seen in golf."

While being in defence of McIlroy, Poulter also paid tribute to the achievements of Hatton, who is now the British No 1 and ranked fifth in the world - a lofty position that Poulter also reached in 2010.

"World No 5 is a big position to be in, and I know that because I got there myself," Poulter added. "It takes a lot of hard work, Tyrrell is putting in the hard work and has spent a lot of time on his fitness.

"He's become mentally stronger, he's a character, but he can be very hard on himself and we've all seen that in his personality. But he's become a very good golfer. He hits the ball very straight, and he holes putts. Over the last 18 months, he's won four times around the world, so he's a force to be reckoned with.

"And it's great to see English golfers moving up in the world rankings and doing some great stuff."

Poulter slipped out of the world's top 50 after missing the cut in Abu Dhabi, but he remains "driven" to qualify for the Ryder Cup in September and is reluctant to discuss the prospect of being at Whistling Straits as an assistant to European captain Padraig Harrington.

"There's been no conversation and there will not need to be a conversation until the 'last resort' string has been pulled," said a defiant Poulter. "I am committed and focused.

"Yes I'm 45 now, but the challenge for me is to stay hungry, stay committed to all the good things I've been doing with my game and everything around it to make sure I'll be slipping on a shirt in September and not holding a radio.

"I am very driven to make sure I'm in that team."