Patrick Cantlay and Jon Rahm will go head-to-head once again on the final day of the PGA Tour season, with Justin Thomas five off the lead in third place - watch on Sunday from 5pm on Sky Sports Main Event and Sky Sports Mix. 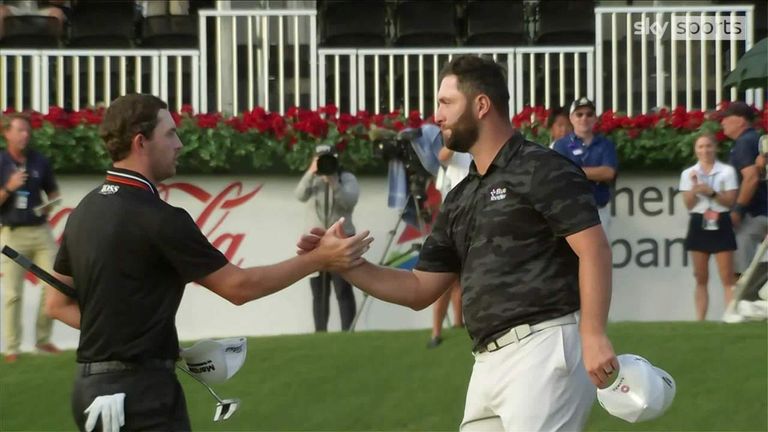 Patrick Cantlay moved a step closer to winning the FedExCup and its $15million jackpot after doubling his advantage over world No 1 Jon Rahm at the Tour Championship.

Cantlay, the only three-time winner on the PGA Tour this season, recovered from two bogeys in a three-hole stretch on his back nine to post a three-under 67 at East Lake and move to 20 under.

A final-hole birdie doubled the world No 4's advantage over playing partner Rahm, who carded a third-round 68, while a five-under 65 lifted Justin Thomas to third spot and five off the lead.

"It's pretty cool that a whole year race technically is ending tomorrow," Rahm said. "Not that we separated ourselves a lot, because JT [Thomas] had a good round today, but if we keep playing the way we have, unless somebody posts a really low score out there, hopefully it will be a good show down on the back nine with me and Patrick [Cantlay].

Cantlay started the day with a one-shot advantage and holed a 15-footer to save par at the first and remain in the solo lead, only for Rahm to pull level with the American after draining a 15-foot birdie at the third.

Both players got up and down from the greenside bunker to take advantage of the par-five sixth and extend their cushion over the chasing pack, with Cantlay adding another birdie from 12 feet at the seventh to edge back ahead.

Rahm fell two behind when he had to pitch out of a fairway bunker on his way to a bogey at the eighth, as Cantlay followed a 30-foot birdie at the ninth by rolling in from 10 feet at the par-four next to suddenly find himself four clear. 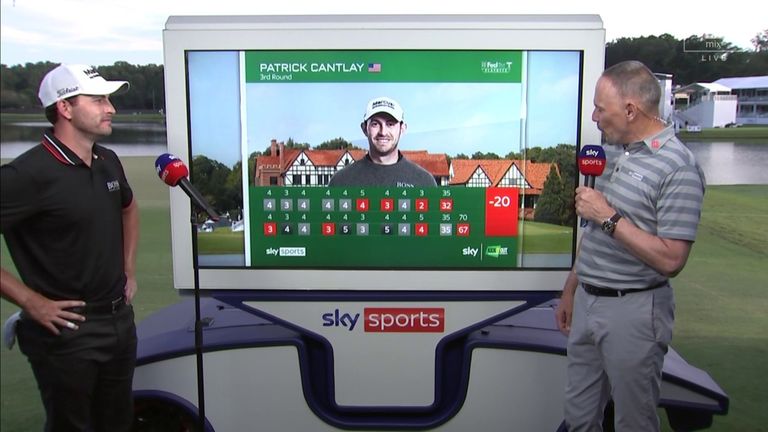 Cantlay missed from eight feet to save par at the 11th but converted from a similar distance at the 13th to match Rahm's 25-foot birdie, before seeing his lead cut to one when he followed a bogey at the 14th with another dropped shot at the 16th.

Both players claimed a share of the spoils at the par-four 17th and Rahm posted a two-putt par at the last, where Cantlay splashed out of the sand to 25 feet and nailed his birdie effort to jump back two ahead of the world No 1.

A birdie at the last for Patty Ice. 🧊@Patrick_Cantlay will take a 2-shot lead into Sunday @PlayoffFinale. pic.twitter.com/NbQitXdp79

"The internal drive to win golf tournaments is really what drives me, and so the external factors are not as much of a factor for me," Cantlay said. "I'm going to feel similar to how I feel most any Sunday when I'm coming down the stretch for a golf tournament because my drive to win is strong inside me.

"The other stuff is just a consequence of that, and I don't play the game to make money. I play the game because I want to win golf tournaments and I love doing that, and I'm in a great spot to do that tomorrow."

Thomas made a charge up the leaderboard by making a 15-foot birdie at the second and picking up further shots at the sixth and eighth, with three consecutive birdies from the 12th temporarily getting him within three of the lead.

The 2017 FedExCup champion then carded a three-putt bogey at the par-five last to slip back to 15 under, with Kevin Na a further two strokes back in fourth spot after a bogey-free 66.

Billy Horschel and Abraham Ancer are nine behind in a share of fifth place, with Bryson DeChambeau's slim hopes ended when he bogeyed three of his opening four holes on his way to a third-round 72.

Defending FedExCup champion Dustin Johnson is in the group on eight under alongside 2015 FedExCup winner Jordan Spieth and Olympic gold medallist Xander Schauffele, while Rory McIlroy dropped five shots in a four-hole stretch around the turn to card a four-over 74.

Who will win the FedExCup and the $15million jackpot? Watch the final round live on Sunday from 5pm on Sky Sports Main Event and Sky Sports Mix.