"When I'm in the locker room, I see guys beaming with confidence and really hungry to win," says Tony Finau ahead of the Ryder Cup; Daniel Berger and Harris English relishing USA chance; watch the Ryder Cup live on Sky Sports Ryder Cup from 1pm on Friday 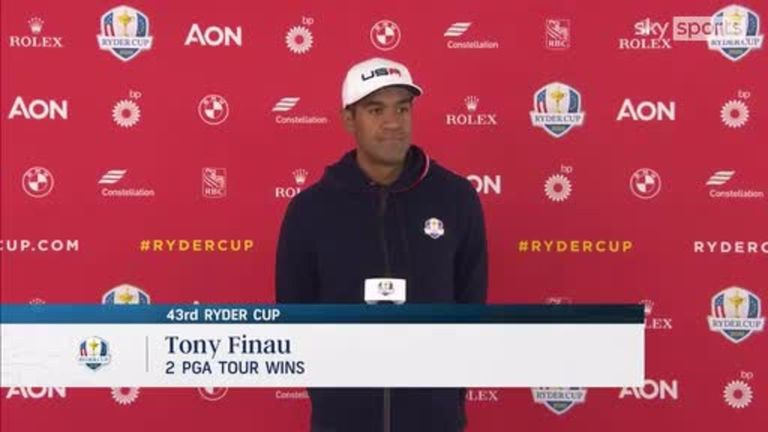 Tony Finau believes the "change of culture" in the United States team this year will help them wrestle back the Ryder Cup from Europe at Whistling Straits.

Finau is one of only six survivors from the USA team beaten by Europe in Paris in 2018, but is relishing being part of a younger and hungrier team - which contains six rookies - as he prepares to make his second Ryder Cup appearance.

The 32-year-old, who won two of his three matches three years ago, admits he did not enjoy watching Europe celebrate their victory at Le Golf National and does not want to witness similar scenes in Wisconsin.

"We have a whole new team," said Finau. "We have a team with no scar tissue. There's only a handful of us that has even played in a Ryder Cup, and the few of those, we have winning records. So we actually don't have guys on our team that have lost a lot in Ryder Cups.

"We've got a whole different group of young guys that are hungry. You guys see six rookies. Man, in this team room, I don't see any rookies. I see 12 guys that are confident and none of us are wide-eyed. We want to win. At the end of the day, that's what I see. When I'm in the locker room, I see guys beaming with confidence and really hungry to win.

"That's refreshing. And I'm not saying that I didn't see that in Paris, but there's a certain feel, I feel like, and the only reason I see this is a big one is because I think the culture of American golf is changing in that you guys are seeing, we are so much younger. This is the youngest team we have ever had by a long shot.

"I think the culture of what we want to bring, not only at this Ryder Cup but many Ryder Cups to come, we have had I think some publicity about Americans not having the camaraderie maybe that the Europeans have, or not have the interest in playing in the Ryder Cup. That's not the case.

"They have outplayed us in quite a few Ryder Cups and that's the mould we want to change going forward and that's why I say that's a big one.

"And the guys that are on this team that were in Paris, it's hard to watch another team celebrate in front of you. This is a big one because we don't want to experience that again.

"With that being said, there's that extra motivation I think or extra drive to change the culture of American golf and we have that opportunity this week."

Daniel Berger is one of the six rookies in the American team and is relishing the experience.

Berger said: "I'm excited for it, I'm excited to represent the United States of America and to be a part of a great group of guys that you're usually competing against on a day-to-day basis.

"It's a cool experience and it's something that I've looked forward to for a long time."

Another American rookie, Harris English, feels earning a place on the team adds greater meaning to his career.

He said: "Being 32 years old, it means a lot more now than if I'd made it in my first or second year on Tour. This is my 10th year on Tour.

"I've put in a lot of hard work in the last couple of years and this has definitely been a goal of mine. I wouldn't have had the career I'd have wanted if I hadn't made a Ryder Cup. There is definitely more of a sense of accomplishment."