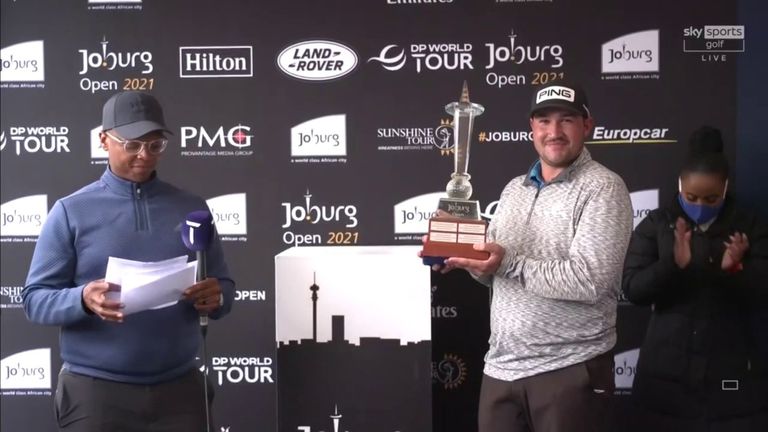 South African Thriston Lawrence won the maiden event of the DP World Tour era as the Joburg Open was reduced to a 36-hole event due to inclement weather.

International travel restrictions imposed on South Africa had already resulted in the season opener being reduced to 54 holes to allow non-South African resident players, caddies and tournament support staff to return to their home countries.

Lawrence, who opened the tournament with back-to-back 65s to reach 12 under, had a four-shot lead at the end of the second round, which was only completed on Saturday after weather delays on day one and two.

Despite a bogey on the first hole of his third round, play was quickly suspended due to more bad weather before tournament organisers decided to abandon the day's play, forcing the scores to be reverted.

Along with Lombard and Chesters, Lawrence also secured one of the three places on offer in the field for next year's Open Championship at St Andrews, with Norris already exempt.

Victory has also assured the 24-year-old Lawrence of a DP World Tour exemption until 2023.

The FIRST winner on the @DPWorldTour is our very own @ThristonL 🇿🇦🏆

"I am shaking to be honest. It is so surreal," Lawrence said.

"I don't think anybody would have thought it would turn out this way, to finish on a Saturday afternoon.

"But [I am] just so thankful. It is a life-changing moment for me. A lot of things are going to change now in my schedule."

With concerns surrounding a new Covid-19 variant in the country, next week's South African Open Championship is also no longer sanctioned by the DP World Tour, with the Alfred Dunhill Championship in December cancelled completely.