FedExCup Playoffs: What do the players make of the staggered scoring at the Tour Championship?

FedExCup leader Patrick Cantlay starts the Tour Championship on 10 under and with a two-shot lead; Jon Rahm begins four back and Justin Thomas starts six behind - watch live throughout the week on Sky Sports Golf 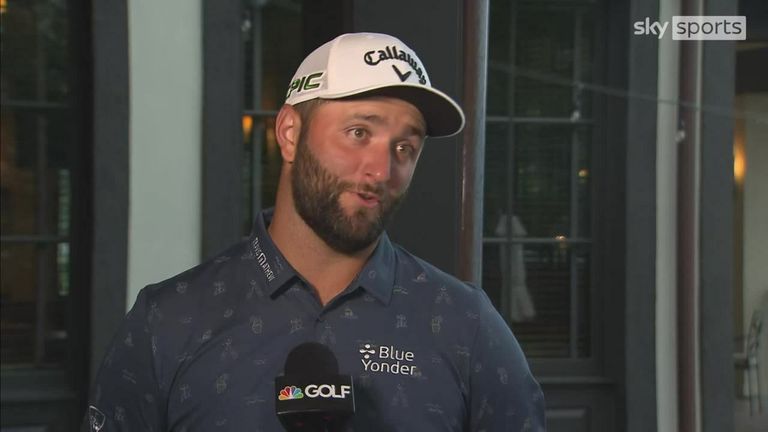 Jon Rahm and Justin Thomas are among the golfers to question whether the Tour Championship's staggered scoring is the best way to crown a FedExCup champion, although both admit the system is easier to follow.

Only the top 30 in the FedExCup standings are eligible to tee it up at the East Lake, where players are given a strokes-based advantage based on their position in the season-long rankings and FedExCup leader Patrick Cantlay starts with a two-shot lead.

All players in the field start no more than 10 shots off the lead, with the system - introduced during the 2019 playoffs - meaning that the winner of the Tour Championship is now also crowned the FedExCup champion.

Who can still win the FedExCup?

We take a closer look at how the players in action at the Tour Championship qualified for East Lake.

World No 1 Rahm dropped from second to fourth in the standings after a tied-ninth finish at the BMW Championship, meaning the US Open champion starts the week four strokes behind and knowing exactly what he must do to have a chance of claiming the $15million jackpot.

"I'm not going to say too much because I know my words are going to be possibly, let's say, muddled to the extreme and almost make it sound about something different than what I feel, but I'm not the biggest supporter of the full format itself," Rahm said.

"What I do like is the fact that you understand what's going on and what's going to happen, who is on the lead and what you have to do to win, but I don't agree with every part of the format this week."

Players champion Justin Thomas - the 2017 FedExCup champion - begins the week in sixth spot and six strokes behind Cantlay, with the 14-time PGA Tour winner believing that the system made need changing in the future to better highlight a player's achievements over the whole season.

"I like it more now than I feel like I did when I first heard it," Thomas said. "I mean, it's easier for people to understand at home, which I think was the main reason that it's happened or that it kind of came about.

"I'm not really a big fan of whoever finishes lowest winning the golf tournament, because that's not necessarily the fact and winning golf tournaments out here is a big deal. I personally wish that that wasn't a thing because, obviously, if you're 10-under then you have a lot better chance to win the actual tournament versus everyone starting at the same score.

"Then you obviously get into the fact of, I could have the greatest season of all time on the PGA Tour. I could win 15 times in a season and I could come here and I could just have something just detrimental happen to where I either can't play or I have an injury and I don't play, then I finish 30th in the FedExCup because of that.

"I don't think that's fair and I think that's something that could somehow be tweaked or fixed. But I do like the fact that everybody that's here this week knows exactly where they stand, they know what they have to do and they just have to go out and get it."