Rory McIlroy: "I think a lot of players play their best when there is no expectation, trying to take that expectation off and that's what happened with Darren that time"; watch The 149th Open exclusively live on Sky Sports The Open this week

Rory McIlroy will be hoping to make it back-to-back Open victories for Northern Ireland at Royal St George's this week when he tees off in The 149th Open.

The Kent course last played host to The Open in 2011 when Darren Clarke triumphed by three shots to claim his only major victory at the age of 42.

Clarke had dropped to 111th in the world rankings ahead of The Open and credited his improved form to a chat with American golf psychologist Bob Rotella which helped to sort out glitches in his putting stroke.

McIlroy, who finished tied for 25th behind Clarke that year, believes the key to his fellow Ulsterman's victory was taking away the expectation and remaining on an even keel with such a fine line between success and failure.

"I think a lot of players play their best when there is no expectation, trying to take that expectation off and that's what happened with Darren that time," said McIlroy, speaking at the launch of GolfPass on Sky Q last week. 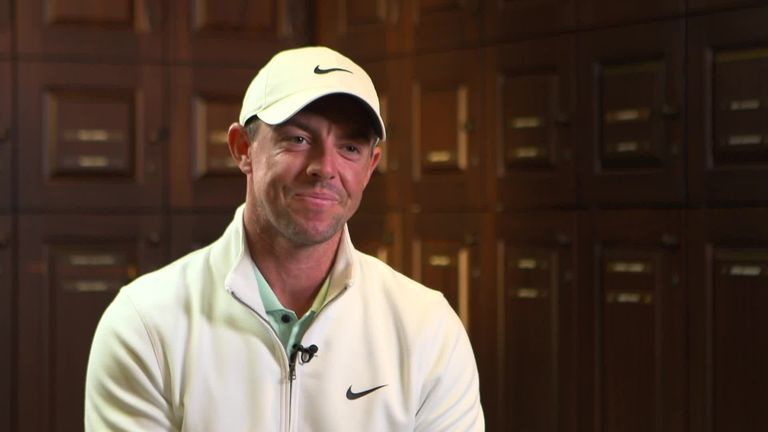 "He felt like he couldn't get the ball in the hole, felt he wasn't hitting it good. He practised, had that famous chat with Bob Rotella on the Wednesday afternoon and saw how that transformed him.

"Just when you think you have figured it all out it knocks you back a bit and whenever you feel you are lost you get a spark and off you go again.

"It's a very fickle game, that's the nature of it unfortunately, and everyone who has played the game at a high level knows that.

"You don't want the lows to be too low but you don't want to get too above yourself or get too high or too filled with expectation because that is no good either. Being on a pretty even keel in this game is always going to stand you in good stead."

McIlroy had won the US Open in 2011 before heading to Sandwich and he revealed he was playing a practice round with Clarke when they joined up with that year's Masters winner Charl Schwartzel and the defending Open champion at the time, Louis Oosthuizen.

"It was sort of the three of us being major champions and Darren did feel left out," said 2014 Open champion McIlroy.

"But he went on to win that week, which was great as I think everyone was so happy to get what he had been working so hard for a long time."

McIlroy will have plenty of time to practise ahead of the final men's major of the year this week after missing the cut at last week's Scottish Open.

As a result, he was the first player off on a dreary Sunday morning at Royal St George's and played his 18-hole practice round in virtual solitude.

"As soon as I stood up on every tee box I was like, 'Oh yeah, I remember this,'" said McIlroy, who suggested he is likely to now play nine-hole practice rounds each day before Thursday's opening round.

"The landscape looks so barren, there's not a lot of stuff that stands out. It's just a bunch of dunes and it's hard to see where the holes go. But once you stand on the tees you remember.

"I looked at the forecast and it looks pretty wet tomorrow (Monday) and Tuesday so I wanted to get out and play and re-familiarise myself with the golf course. Now I can just sort take it a little easier."