Nathan Lyon finishes with eight wickets in the match 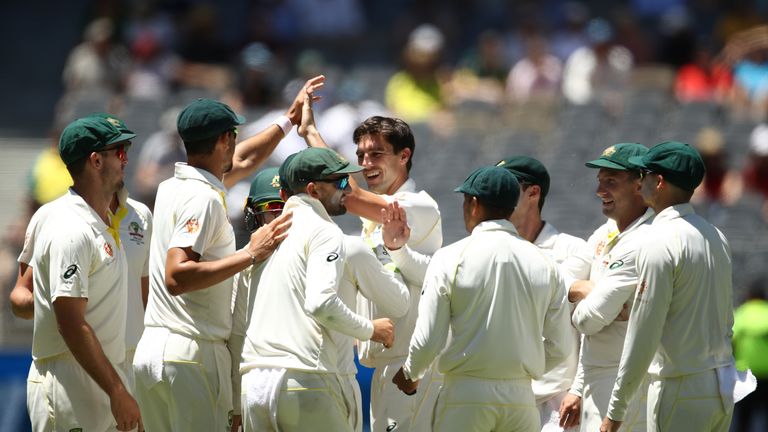 Australia have won their first Test match since the ball-tampering controversy as their attack blew apart the India tail for a 146-run victory on day five in Perth.

The hosts only needed 15 overs to take the remaining five wickets and level the series at 1-1, with India folding from 112-5 to 140 all out.

India lost the key wicket of Hanuma Vihari for 28 when he holed out off Mitchell Starc (3-46) and from then on, it was just a matter of time before Australia sealed the win.

Rishabh Pant, who raced to 30 runs from 61 balls, was well caught by Peter Handscomb off Nathan Lyon (3-39) and an over later Umesh Yadav (2) popped a shot back to Starc for two.

Pat Cummins (2-25) wrapped up the last two wickets in the space of four balls - Ishant Sharma (0) edging behind for a duck and Jasprit Bumrah (0) launching a shot high into the sky with Cummins positioning himself to take the catch.

The win is the first for Tim Paine as captain and Australia's first in seven Tests, after former captain Steve Smith, vice-captain David Warner and Cameron Bancroft were banned for their part in a ball-tempering plot during a Test in Cape Town in March.

The next Test between India and Australia starts in Melbourne on Boxing Day before the series concludes in Sydney from January 3.

Australia have retained the same 13-man squad for the final two matches of the series.