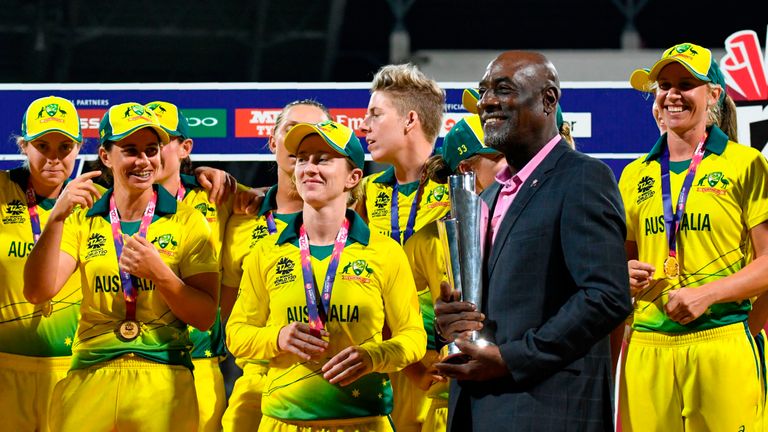 Australia lifted the World T20 title for the fourth time after being presented with the trophy by Sir Vivian Richards in Antigua.

Australia cruised to an eight-wicket win over England to clinch their fourth Women's World T20 title in style in Antigua.

Ashleigh Gardner (33 not out) and Meg Lanning (28no) shared an unbeaten 66-run, third-wicket partnership as the Southern Stars chased down their target of 106 in just 15.1 overs.

Australia had put in a poor effort in the field with a number of dropped catches and misfields but England's batters were unable to adjust on a sticky pitch with only Danni Wyatt (43) and Heather Knight (25) making double figures as they were bowled out for 105 in 19.4 overs.

All-rounder Gardner picked up 3-22, including taking the two key wickets of Wyatt and Knight, while Megan Schutt's 2-13 ensured the pair finished joint top-wicket takers - along with Windies' Deandra Dottin - with 10 scalps each.

Alyssa Healy fell for her lowest score of the tournament when she was bowled for 22 by Sophie Ecclestone while Beth Mooney (14) was caught behind off Dani Hazell, but Gardner smacked two huge sixes as Australia cantered home with 29 balls to spare.

England found batting hard having elected to put a score on the board, as the ball stuck in the pitch, making it difficult to get away easily.

The nerves from both sides were evident as a risky flay at the ball from Wyatt clipped the fingertips of Rachael Haynes at point to earn the opener her first life - four balls later Healy saw a simple take ping off her gloves and away as Wyatt was dropped for a second time.

Tammy Beaumont's poor tournament with the bat ended with another low score as she skied Schutt to Elyse Villani at mid-off to fall for four and Amy Jones (4) was then brilliantly run out by Georgia Wareham from mid-on after the England wicketkeeper had called for a tight single.

The World Cup champions were soon three down when Nat Sciver (1) became Ellyse Perry's 100th T20I victim as she was trapped lbw and although the England all-rounder reviewed, seemingly convinced she had hit the ball, the evidence was inconclusive and the third umpire was unable to overturn the decision.

Wyatt, looking scratchy but still the only batter finding the boundary ropes, was put down for a third time, with Delissa Kimmince unable to hold on to a regulation return catch but the England player's luck finally ran out as Lanning took a leaping take at cover. 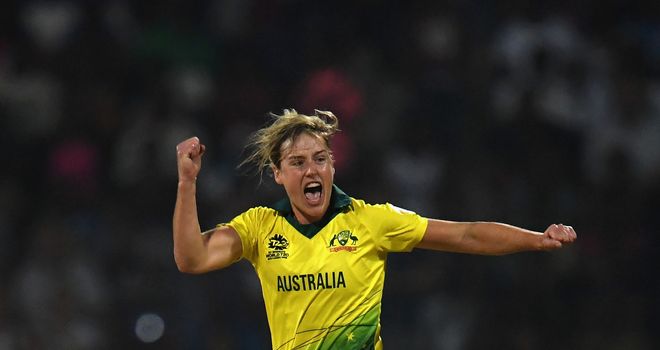 The Southern Stars captain then instigated an England collapse with her decision to review a possible lbw against Lauren Winfield (6) - bowler Wareham (2-11), keeper and umpire were uninterested but Lanning's call proved correct and Sophia Dunkley was then bowled next ball for a golden duck.

Captain Knight looked to provide some resistance - she struck Gardner for a six before being caught at mid-off next ball as England lost 6-31.

With a low total to chase, the tournament's top run-scorer Healy began with a flourish, striking Anya Shrusbole's first over, the second of the innings, for three boundaries but Ecclestone got through the defences of the dangerous batter to keep England in the game, while Hazell then picked up Moone.

Australia, though, never looked in danger - power-hitter Gardner finding her range, striking three maximums in her unbeaten 33 off 26 balls, before Lanning hit the winning run to seal their fourth World T20 title from five finals.