England have a 1-0 lead in the Investec Ashes series after a crushing 169-run win over Australia with a day to spare in Cardiff.

Having set the tourists a daunting target of 412, England bowled them out for 242 midway through the final session on day four, Stuart Broad (3-39) and Moeen Ali (3-59) taking three wickets apiece.

Australia had briefly looked dangerous when they reached 97-1 just before lunch, with David Warner (52) and Steve Smith (33) looking good.

But that duo fell either side of the interval, two more wickets quickly followed, and Mitchell Johnson’s gallant 77 only served to delay the England victory. 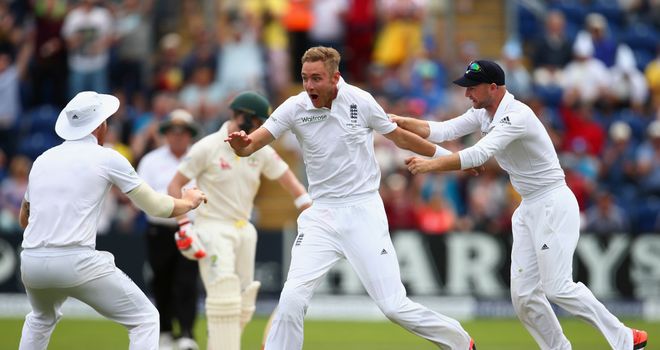 Stuart Broad celebrates after taking the wicket of Steve Smith

The tourists began their run chase on another sunny day in Wales and England squandered an early opportunity when Joe Root dropped Chris Rogers at third slip off James Anderson.

Broad and the luckless Anderson (0-33) were excellent with the new ball but the openers survived several close shaves until Rogers (10) edged Broad to second slip, and replays showed Ian Bell had taken a fine low catch.

However, the pressure eased a little when the opening bowlers went off, and Smith and Warner reached their 50 partnership in just 40 balls, going on to take their stand to 78 before Moeen took a huge wicket just before lunch.

Having received some punishment earlier on he returned for the last over of the morning session and spun his third ball past Warner’s defensive shot to remove the left-hander lbw.

It was 97-2 at lunch and Smith, who had been looking in good touch, fell in the first full over after the break when he edged Broad to Bell at second slip.

Broad was bowling beautifully and struck again moments later, Clarke falling for four when he edged an attempted drive straight to Ben Stokes at backward point.

Mark Wood then got into the act, wicket-keeper Jos Buttler catching Voges (1) after a beautiful away swinger had found the outside edge of the Aussie's bat.

At 106-5 Australia were in huge trouble, four wickets having suddenly fallen for the addition of nine runs. 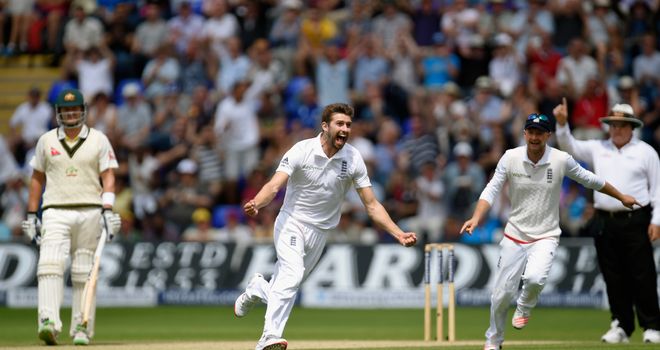 And it was 122-6 when Brad Haddin (7) tried to attack Moeen but Alastair Cook parried the ball at short mid-on and then took a spectacular one-handed catch from the rebound as he fell backwards.

Johnson joined Shane Watson (19), who battled hard, only for the serial lbw victim to fall in that fashion for the second time in the match.

The all-rounder reviewed the decision after Wood’s appeal was successful but the ball was clipping leg and he had to trudge off.

That left Johnson as the main obstacle in England’s path and he played a fine innings, mixing staunch defence with clean ball-striking, and really went on the offensive after tea, taking 17 from one Root over.

However, having played his part in a defiant eighth-wicket stand of 72, Mitchell Starc (17) was dismissed by Root when Cook again parried a half-chance and, amazingly, the rebound fell nicely for England once more, Adam Lyth diving full-length from slip to take the catch. 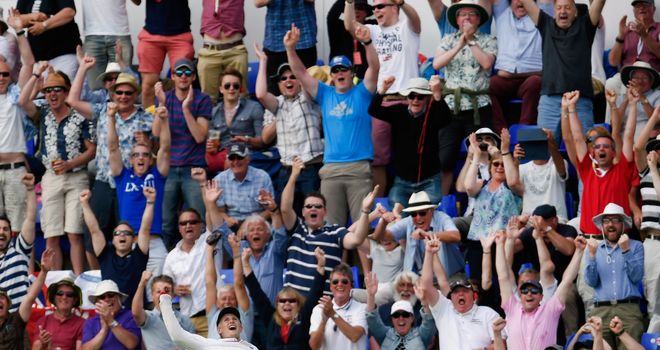 And the Root-Lyth combo were soon back in business as Johnson tried to launch the spinner into the stands, only to edge the ball to slip and depart after hitting nine boundaries and a pair of sixes.

The final wicket then fell without further addition, Josh Hazlewood (14) lofting Moeen straight into the grateful hands of man of the match Root at long-on.

Having entered the five-match series as underdogs, England have claimed the initiative after a cracking four days of cricket, and they will look to build on their good work when the second Test gets underway at Lord’s on Thursday.

Watch The Ashes live on Sky Sports, with continued coverage of the series on Sky Sports Ashes HD. You can watch individual days with a NOW TV Sports Day Pass, while our Ashes Events Centre - the best of Sky Cricket's analysis at your fingertips - is available on our iPad app.