Ben Stokes out obstructing the field in Australia's 64-run win

England suffered a 64-run defeat to Australia in the second one-day international at Lord's after Ben Stokes was given out obstructing the field.

Eoin Morgan's side, chasing the tourists' 309-7 in a match reduced to 49 overs a side by rain, were 141-3 in the 26th over when the all-rounder intercepted Mitchell Starc's shy at the stumps with his hand after the seamer fielded a straight drive.

Stokes was given out by umpire Kumar Dharmasena after the incident was reviewed, the decision that he wilfully interrupted the ball's path to protect his wicket being greeted with boos from the crowd.

That was the first of five wickets to fall for 46 runs but the chase was re-ignited by Morgan (85) and Liam Plunkett (24 off 12 balls), who smote 55 off 3.3 overs – a record ninth-wicket ODI stand for England against Australia.

But the pair's efforts proved in vain as England folded to 245 all out off 42.3 overs, Morgan the last man out.

Australia's victory, which puts them 2-0 up in the five-match series, came at a cost as David Warner was ruled out for the rest of the tour with a broken thumb.

The opener was struck by a rising delivery from Steven Finn off only the second ball of the match – the first he faced – and left the field without facing another ball. 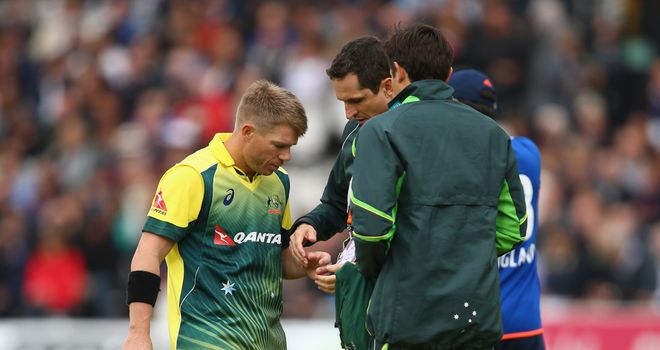 The tourists, put in to bat, posted over 300 for the second successive match on the back of Steve Smith's 70 and some late fireworks from Mitchell Marsh, who blasted 64 off just 31 balls.

Smith laid the platform by sharing a stand of 99 runs in 19.3 overs with George Bailey (54) before Glenn Maxwell went on the offensive to strike 49 off 38 balls. 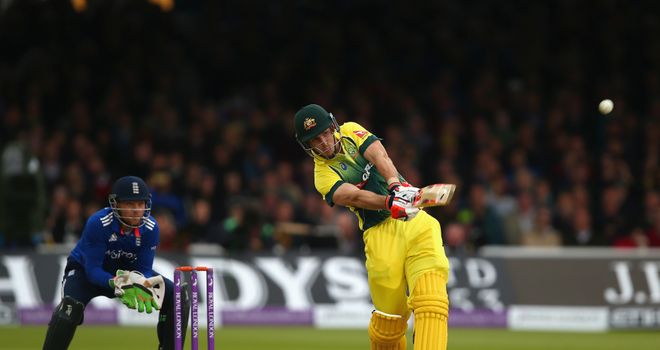 Shane Watson (39) and Marsh belatedly swelled the tally with a stand of 63 off 43 balls – Marsh reaching his fifty off just 26 balls with four fours and three maximums.

England's openers – as in their side's 59-run defeat in the first ODI at the Ageas Bowl – made a decent start, putting on 37 in under six overs.

It took a stunning one-handed catch by Smith to break the stand, Hales falling for a well-paced 18 off the bowling of Nathan Coulter-Nile.

Surrey blaster Jason Roy picked up from where he left off in Hampshire, following up his 67 by powering 31 off 32 balls only to nick a wide Pat Cummins delivery behind.

James Taylor struck five fours in a brisk 43 but that match came alight when Stokes was adjudged to have obstructed the field – Smith not withdrawing the appeal in favour of letting the umpires decide. 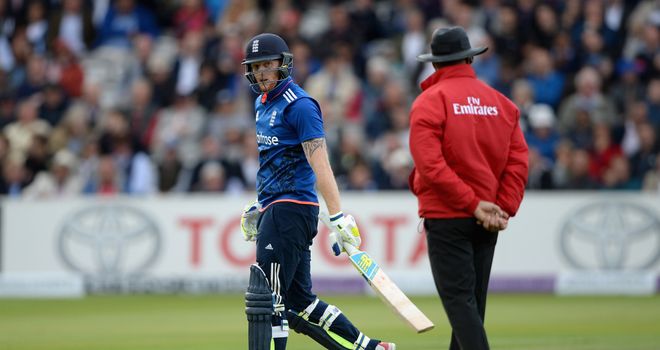 But just when the game seemed up, Morgan opened his shoulders and in partnership with Plunkett launched a savage assault on Australia's attack.

The pair's stand eclipsed the previous best tally for the ninth wicket partnership for England against Australia in ODIs, the 47 put on by Buttler and Steven Finn at Old Trafford in 2013.

But victory proved out of reach after Starc – to vociferous boos from the home crowd – bowled Plunkett, leaving Morgan with simply too much to do.

Watch the third ODI between England and Australia live on Sky Sports 2 from 1.30pm on Tuesday.