England mounted their second-highest successful run-chase to secure a six-wicket victory over Australia in the fourth one-day international, at Emirates Riverside.

SCORECARD | HIGHLIGHTS | HOW IT HAPPENED

Jason Roy (101) and Jonny Bairstow (79) put on 174 - their second opening stand of over 150 in as many games - before Jos Buttler's dazzling 54no off 29 balls and Alex Hales (34no off 45) finished matters, giving the hosts the chance to whitewash Australia in Sunday's fifth ODI.

Only on one occasion have England scored more to win an ODI batting second - that being the 350-3 amassed against New Zealand at Trent Bridge in 2015.

On the longest day of the year, Australia put in a sustained shift but again ended-up empty-handed.

Flayed in the third one-dayer on Tuesday, when England scored a world-record 481-6, Australia regathered sufficiently well to post the highest ODI total at the ground despite three wickets in an over late on for David Willey (4-43) only for it to be trumped.

Finch shared a first-wicket stand of 101 in 19.1 overs with Travis Head (63), who stroked several glorious on-drives before pulling Adil Rashid straight to Willey in the deep. 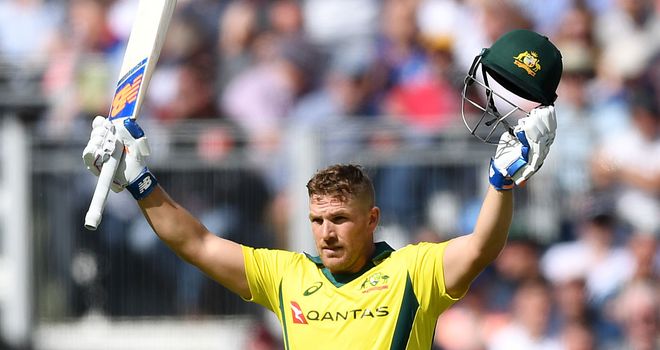 The opener shared a second successive century stand with Marsh and reached his 11th ODI ton and sixth against England off 105 balls with six fours and three sixes, but had barely finished celebrating when he fell to his very next ball, trapped lbw by a Mark Wood delivery that skidded onto him.

Wood claimed a second victim four balls later as Marcus Stoinis went back to a full delivery and was bowled for just one to leave the tourists on 227-3 with a little over 10 overs to go.

Marsh, who reached his 50 with a six over long-on off Moeen Ali, clobbered Willey back over his head for six to launch the charge and plundered 24 off one Rashid over, bringing up his fifth ODI century with a six over midwicket.

It took a supreme partnership catch to end his knock - Marsh launching Willey to deep midwicket where Roy took the ball before jettisoning it to Overton before he stepped over the rope.

That was the second of three wickets to fall to Willey in the 48th over - Carey picking out Craig Overton at midwicket off a full toss before Neser (two) tickled a catch behind.

Willey added the wicket of Paine, trapped lbw, in the final over to finish with 4-43. Craig Overton, making his ODI debut in place of the rested Liam Plunkett, was the most expensive of the bowlers with 0-55 off seven overs.

Roy raced out of the blocks at the start of England's chase, dominating the strike to post his 13th ODI fifty off 36 balls with the help of some crisp driving and top-edged hook for six off Billy Stanlake.

Nor did Bairstow linger when given the opportunity to face, contributing 39 to a hundred stand that came up off 80 balls - the fifth time the partnership has put on three figures in 16 innings.

England's victory prospects seemed as bright as the evening sun - and the incongruous floodlights - as Roy brought up his hundred with an immense six over midwicket off Nathan Lyon, from his 81st delivery.

Yet moments later the Surrey opener picked out point attempting to take the attack to Lyon again and two overs later he was joined in the pavilion by Bairstow, who fell short of a fifth century in seven ODIs when he glided a catch behind looking to target third man.

England's wobble might have vibrated more strongly had Tim Paine not shelled a regulation chance when Hales nicked behind and although Joe Root fell to the slog-sweep and Eoin Morgan feathered through, a required run-rate of under a run-a-ball failed to trouble England's long line-up.

Watch the fifth and final ODI between England and Australia live on Sky Sports Cricket from 10.30am on Sunday.