England take a 2-0 series lead with them to the third ODI at Trent Bridge on Tuesday after their highest-ever ODI score against Australia was good enough to earn them a 38-run win in Cardiff.

Jason Roy (120 off 108) hit a fifth one-day international century, while Jos Buttler - stand-in skipper, with Eoin Morgan out suffering from back spasms - blasted an unbeaten 91 off 70 balls as England scored 342-8 from a rain-interrupted first innings.

Shaun Marsh (131 off 116) struck a fine century for Australia in reply, and would have had England worried when still at the crease with 53 runs required and five overs to go, but the visitors ultimately fell short, bowled out for 304.

A win on Tuesday would see England claim a seventh ODI series win in a row, while Australia must avoid defeat to stay in contention with games at Emirates Riverside (Thursday) and Old Trafford (Sunday) still to come.

Presented with overcast conditions and a green pitch, Australia eagerly put England into bat first in Cardiff. But, while it was Roy that ultimately did the damage, a blistering start from Jonny Bairstow immediately showed there were no real demons in the pitch.

Bairstow (42) struck eight fours and a six in an enterprising 24-ball stay at the crease before he came unstuck by a Kane Richardson delivery that just nipped back a touch, edging it behind to Tim Paine, while Alex Hales (26) fell in similar fashion to another ball that jagged back into the right-hander - though he could only deflect Jhye Richardson's delivery back onto his stumps.

Joe Root (22) batted nicely either side of the first of two stoppages for rain, but a fine diving catch from D'Arcy Short at deep square-leg ultimately did for him. Though three England batsmen had got themselves in only to get out, Roy was going along nicely at the other end, making a point of playing straighter and slightly more circumspect than he has in previous innings and ultimately brought up his century, off 97 deliveries, shortly after the second break for rain.

His and Buttler's 60-run stand created history - England becoming the first team in the history of ODI cricket to have fifty partnerships for each of their first four wickets.

Roy eventually fell in the 36th over, getting a fine inside edge through to Paine, who took a good catch low to his left - even better when considering that earlier in the over he took a nasty blow in the face off a ball that bounced viciously in front of him. It prompted a late flurry of wickets.

But, Buttler kept the foot on the accelerator, racing through to a 38-ball half century with the help of back-to-back ramped sixes off Jhye Richardson and lifting England up to their record score versus Australia.

England's seamers looked to bowl more back of a length than their Aussie counterparts and Mark Wood found immediate success from round the wicket to Travis Head (19), tucking up the left-hander who could only scoop the ball to midwicket, with Hales taking a brilliant diving catch. 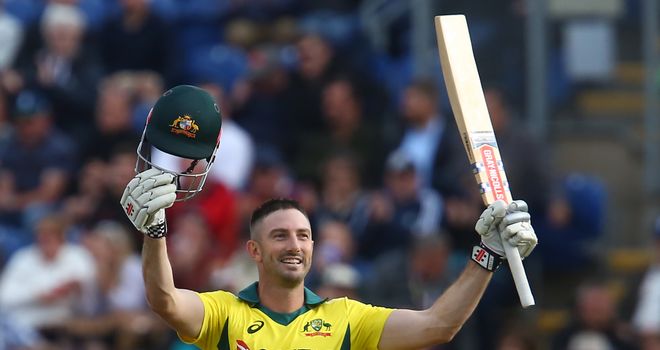 Marsh served up two very similar opportunities to Bairstow and sub fielder Tom Curran at midwicket, being dropped on 5 and 25. Though both were very tough chances, they proved costly misses.

Root made no mistake with a good catch at slip to see the back of Short (21) off the impressive Moeen Ali (2-47), while Marcus Stoinis (9) chopped Liam Plunkett onto his stumps, and Aaron Finch was out lbw for a duck to Adil Rashid as Australia appeared to be collapsing.

But, Marsh finally found some support from Glenn Maxwell (31) and Ashton Agar (46), sharing a 96-run partnership with the latter, and going through to his own 95-ball ton, that had Australia threatening to pull off an upset win.

But, Rashid (3-70) did for Agar, out stumped thanks to some tidy work from Buttler, and Plunkett (4-53) took the crucial wicket of Marsh, bowled by a slower ball as they shared the final five wickets between them.