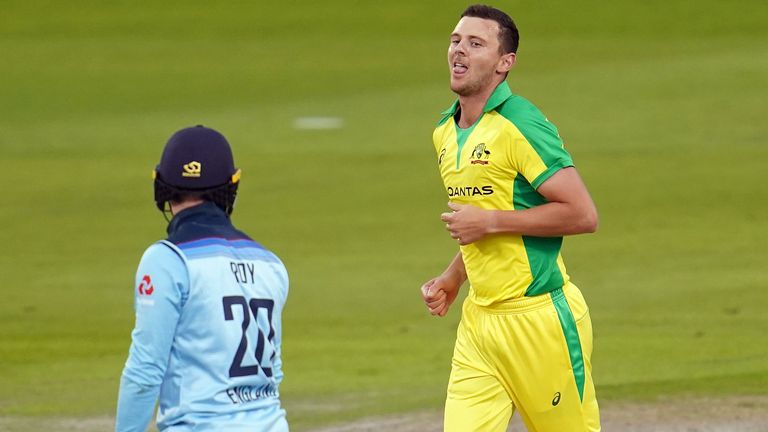 Sam Billings' maiden international ton proved in vain as Australia claimed only their third win over England in 14 ODIs with a 19-run victory in the first Vitality ODI, at Emirates Old Trafford. 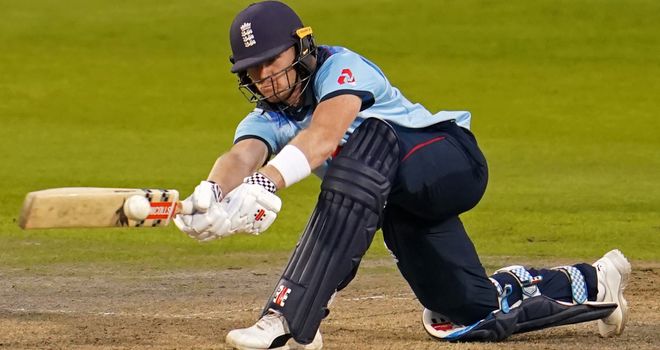 Pacemen Mark Wood (3-54) and Jofra Archer (3-57) prevented Australia reaching 300 but, even so, England were left needing to mount the highest successful ODI run-chase at the ground.

Man-of-the-match Josh Hazlewood (3-26) and Mitchell Starc set the tone for a high-class bowling display by reducing England to 13-2 before leg-spinner Adam Zampa weighed in with 4-55 as Eoin Morgan's side closed on 275-9 to go 1-0 down with two games to play, the next of which is on Sunday.

England had earlier taken to the field after winning the toss with nine of their World Cup-winning side on show - Ben Stokes and Liam Plunkett the two missing - and quickly had Australia under pressure.

Archer produced a snorter of a delivery to knock back David Warner's off-stump for six and Wood struck with his first ball, finding Aaron Finch's edge, to leave the tourists 46-2 after the opening powerplay.

Marcus Stoinis bedded in nicely at three in the absence of Steve Smith, left out of the side as a precautionary measure after being hit on the head in the nets on Thursday by one of the coaching staff.

Three boundaries off one Wood over - one a nick to third man - helped Stoinis canter to 43 off 34 balls before he drove with minimal footwork and edged the seamer behind.

A total of 80-3 became 123-5 as Adil Rashid (2-55) struck twice, trapping Marnus Labuschagne lbw for 21 and drawing a top-edged sweep from Alex Carey (10) - the scalps establishing the leg-spinner as England's leading wicket-taker in ODIs against Australia, surpassing James Anderson (38). 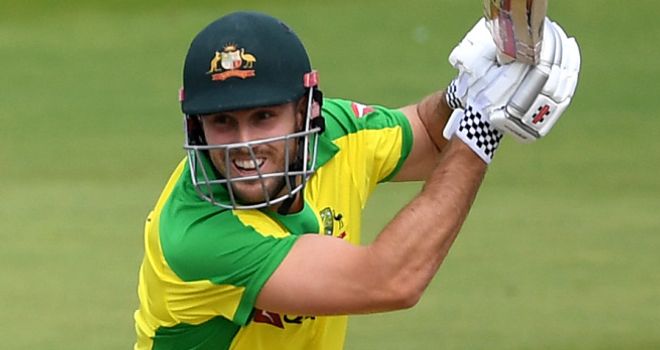 The hosts sniffed a chance to get amongst the tail early only to be thwarted by Marsh and Maxwell, who dug deep to earn the right to become increasingly expansive.

Maxwell brought up the fifty partnership with a reverse-sweep for four before Marsh posted his 12th ODI fifty in 58 matches, off 75 balls with five fours.

He was soon followed by Maxwell, who moved to 49no with a huge six off Rashid over mid-wicket, on course for a half-century off 43 balls - his 20th ODI fifty in 111 matches.

At 218-5 off 40 overs Australia appeared well-placed for an attacking finish and Maxwell began the 44th over with successive sixes off Archer only to then drag the paceman on.

Archer picked off Pat Cummins and Wood trapped Marsh lbw as Australia's hopes of reaching 300 fell away in the closing overs.

England's chase was quickly in trouble under the lights as Hazlewood took a sharp return catch one-handed to remove Jason Roy (three) and Joe Root (one) edged behind off the same bowler.

After 10 overs they had posted just 22-2 and Morgan took on the challenge of leading the counter-punch, signalling his intent with an immense six off Hazlewood over long-off only to crack Zampa's fifth ball straight to mid-wicket.

The leg-spinner's second wicket was a hammer-blow to England's hopes as Jos Buttler (one) lofted a high chance towards long off where Labuschagne took the catch diving forward. 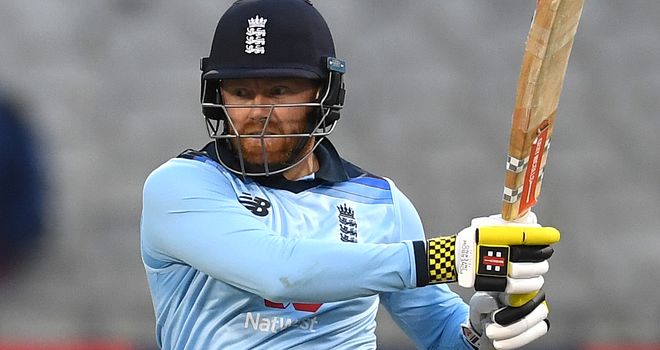 Bairstow continued to battle, scoring 33 off 71 balls prior to launching Zampa for two sixes in three balls en route to his 13th - and slowest - ODI fifty in 81 matches, from 78 balls.

Together with Billings, he helped England to 169-4 off 35 overs and a position from which to attack Australia's target only to hoist Zampa to wide long-on where Hazlewood did well to hold a diving catch.

Billings duly completed his fourth ODI fifty in 19 matches off 66 balls, reverse-sweeping Zampa to great effect, as Moeen Ali (six) and Chris Woakes (10) fell around him.

The Kent batsman continued to battle but with the rate ever-increasing, and Starc and Cummins in particular tightening the screw, the challenge proved too steep.

Billings reached three figures with a pulled boundary off Marsh to the enthusiastic acclaim of his watching team-mates only to go down swinging, caught off the final ball of the innings.