Joe Root hit his 10th ODI century as England eased to an eight-wicket victory over Bangladesh in the opening game of the ICC Champions Trophy at The Oval.

Opener Tamim Iqbal struck a superb 128 for Bangladesh and Mushfiqur Rahim added 79 as they finished on 305-6 from their 50 overs - Liam Plunkett the pick of the England bowlers, taking 4-59.

However, England calmly went about their reply and composed knocks from Root and Alex Hales (95) saw them complete the highest chase in the tournament's history with 16 balls to spare.

Having won the toss and put Bangladesh in to bat, England suffered an early blow when Chris Woakes was forced off the field with a side strain after bowling just two overs.

Meanwhile, Bangladesh took a while to get going but having acclimatised to the conditions, they soon began to put pressure on the England bowlers.

Ben Stokes (1-42), having been passed fit to bowl prior to the game, made the breakthrough, dismissing Soumya Sarkar (28) in a rather fortuitous manner, a wide long-hop uppercut straight to sub fielder Jonny Bairstow at deep point.

Plunkett then had Imrul Kayes (19) well caught by Mark Wood, diving to his left at mid-on, but England were then held up by a superb partnership between Tamim and Mushfiqur. 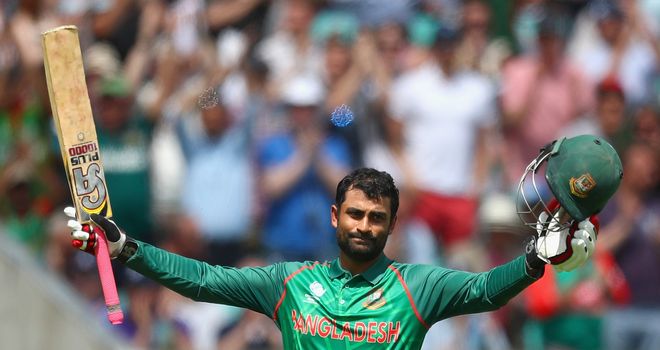 The pair put on 166 for the third wicket before falling in successive balls to Plunkett, after Tamim had gone through to his ninth ODI century.

The Bangladeshi batsmen took a liking to Jake Ball (1-82) and the seamer, a surprise inclusion ahead of leg-spinner Adil Rashid, leaked runs all too readily.

However, he claimed the wicket of Shakib Al Hasan the Bangladesh innings stuttered to a close, Plunkett picking up his fourth wicket in the final over.

While England were rarely troubled in their chase, there was more disappointment for Jason Roy. The under-pressure opener was caught at short fine leg attempting a ramp shot with just one run to his name.

That brought Root to the crease and an effortless drive through the covers early in his innings proved a telling precursor of what was to come. 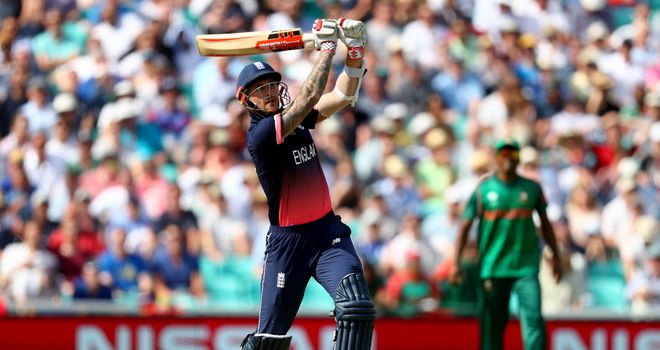 He and Hales milked the Bangladesh bowlers for all they were worth, barely breaking sweat in the process, a barrage of ones and twos punctuated by the odd drive, cut or pull to the fence.

It took the part-time leg-spin of Sabbir Rahman (13) to eventually break the 159-run stand, Hales caught in the deep as he looked to bring up his hundred with a six, having taken 10 from the two previous deliveries.

Any Bangladesh hopes that that wicket may derail England were soon forgotten as Eoin Morgan came in and started confidently.

With around seven an over needed from the final 10 overs, England kicked on with Morgan (75no from 61 balls) twice clearing the ropes and Root, hobbling slightly after rolling his ankle, going through to three figures.

The England No 3 then showed his own attacking prowess, smashing a six over long on before completing the victory with back-to-back fours over the onside.