England's frailties against spin were ruthless exposed once more as Kuldeep Yadav tore through their middle-order before KL Rahul's blistering unbeaten 101 from 54 balls took India to a thumping eight-wicket win in the first T20I.

Jos Buttler's stunning form continued though, the opener hitting 69 from 46 balls as the wickets fell around him.

England made a typically quick start to their innings, Jason Roy taking 16 from the first two overs before Buttler got off the mark by scooping an 87mph delivery from Umesh Yadav over the 'keeper's head for head.

Yuzvendra Chahal was treated with similar disdain as Buttler advanced and plonked the ball over long on.

The partnership was broken in the next over, Roy (30) dragging onto his stumps trying to pull Umesh and as he walked off, England's momentum went with him as Alex Hales struggled for any kind of fluency and Buttler was starved of the strike. 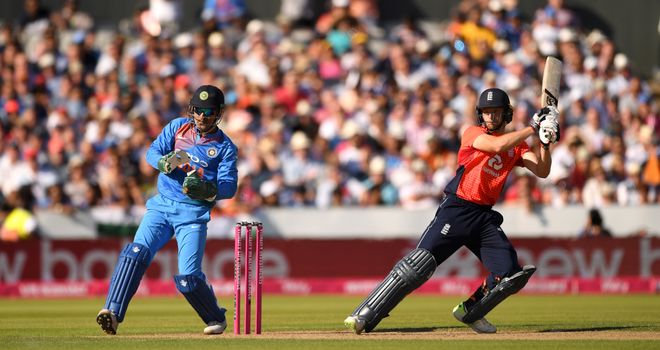 Buttler was able to get on strike for long enough to take 14 from the first three balls of the 11th over, a huge six over deep square in between boundaries either side of the wicket bringing up a 29-ball fifty.

Hales (8) was put out of his misery by Kuldeep in the next over, bowled sweeping, but it was the spinner's next over that really did for England.

Eoin Morgan (7) holed out to the first ball and after Buttler took a single, Jonny Bairstow (0) and Joe Root (0) were both completely flummoxed as they played forward, over-balanced and were stumped, Bairstow beaten past the outside edge and Root through the gate.

Moeen Ali (6) kept out the hat-trick ball but soon sliced one to mid-off, handing Hardik Pandya a wicket to leave the hosts 117-6.

Kuldeep completed his five-for with the prize wicket of Buttler, whose timing, for once, was off as he tried to hit down the ground and was caught at long on.

David Willey's cameo (29no off 15) helped England past 150 but they looked some way short of par at the halfway stage.

The early wicket of Shikhar Dhawan, chopping on trying to flay Willey (1-30) through the offside, gave England early hope and had Roy been able to hold onto a sharp catch at backward point, again off Willey, India may have felt the pressure.

As it was, Rahul, on just 17 at the times, survived and benefitted from another lucky escape in the eighth over as Chris Jordan misjudged a tough catch in the deep and managed only to push the ball over the rope for six.

There was little fortunate from that point though, as he put on a staggering display of power hitting, leaving the equally destructive Rohit Sharma just to work singles and let Rahul get on with it.

Adil Rashid eventually broke the 123-run stand, Rohit (32) driving Rashid (1-25) straight into the hands of Morgan at covers, allowing the raucous Indian fans following a glimpse of Virat Kohli before the chase was done.

With only 30 needed from more than seven overs, he and Rahul took their time, dealing in singles, but it only delayed the inevitable.

Rahul brought up his hundred from 53 balls, leaving Kohli (20no) to seal the win in style by launching Ali (0-37) over long on for six.

India can now wrap up the three-match series in Cardiff on Friday, while an England win would send it to a decider in Bristol on Sunday.