Hardik Pandya claimed his maiden five-for in just 29 balls as India seized control of the third Test against England on day two at Trent Bridge after taking all 10 wickets in the afternoon session.

Hardik (5-28 from six overs), whose scalps included Joe Root contentiously given out caught at slip, helped the tourists bowl out England for 161 in 38.2 overs as they earned a 168-run lead on first innings, having made 329 in their opening knock in Nottingham.

Virat Kohli's men extended their advantage to 292 by stumps on Sunday, for the loss of KL Rahul (36), who was castled by Ben Stokes, and Shikhar Dhawan (44), who was stumped after failing to pick an Adil Rashid googly - India closing on 124-2 with Cheteshwar Pujara (33no) and Kohli (8no) at the crease.

England bossed the morning session, which began 30 minutes later than scheduled due to drizzle, as they took just 7.5 overs to claim the final four India wickets, James Anderson (3-64) and Stuart Broad (3-72) with two each as Kohli's side added just 22 runs to their overnight 307-6.

Alastair Cook (29) and Keaton Jennings (20) then shared England's first half-century opening stand of the series, but their dismissals from successive deliveries caused a collapse of 9-74 and left the home team in danger of being asked to follow on before Jos Buttler's 39 from 32 balls. Alastair Cook has been dismissed 10 times in Tests by Ishant Sharma and averages just 17.50 against him

Cook feathered Ishant Sharma behind, two balls after being dropped at slip by Pujara off the same bowler, while Jennings edged Jasprit Bumrah after poking at a wide delivery - wicketkeeper Rishabh Pant claiming both catches en route to five for the innings on debut.

Sharma then had Ollie Pope (10) caught down the leg side before Hardik took over, starting when he removed Root (16) with his first delivery of the innings, albeit in controversial circumstances.

On-field official Marais Erasmus gave the soft signal of out after deciding Rahul had caught the ball low at slip and TV umpire Aleem Dar saw no conclusive evidence to overturn the call, much to Kohli's delight. Virat Kohli roars with glee after Joe Root is given out

Hardik struck twice apiece in his fourth and fifth overs, bookending the 31st with the wickets of Jonny Bairstow (15) and Chris Woakes (8) caught behind and then nicking off Rashid (5) and pinning Broad (0) lbw in the 33rd to better the 3-66 he picked up at Lord's last week.

England, who also saw Stokes (10) clip Mohammed Shami behind, were 201 runs in arrears when Broad was trapped in front, but Buttler ended any possibility of them being immediately reinserted when he ballooned Shami for two just over cover fielder Ajinkya Rahane.

Buttler smashed Shami's next three balls for boundaries and passed 1,000 Test runs before holing out off Bumrah to end a 33-run last-wicket stand with Anderson (1no) as England shipped 10 wickets in a session for the second time this year following their 58 all out in New Zealand in March. 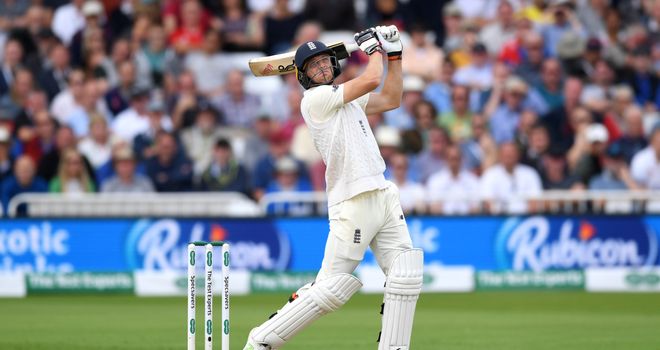 Anderson had earlier removed Shami (3) and Bumrah (0) from back-to-back balls - Bumrah bowled by a beauty that angled in at leg and moved away late to hit middle - after Broad had forced Rishabh Pant (24) to chop on and bowled Ravichandran Ashwin (14) with a superb in-swinger.

Ashwin bowled a solitary over in England's first knock due to a hip issue and the form of India's seamers but will now be expected to figure prominently in the fourth innings, as the visitors look to complete their first win of the five-match series following defeats at Edgbaston and Lord's.

Watch day three of the third Test between England and India, from Trent Bridge, live on Sky Sports Cricket (channel 404) and Sky Sports Main Event (channel 401) from 10.30am on Monday.