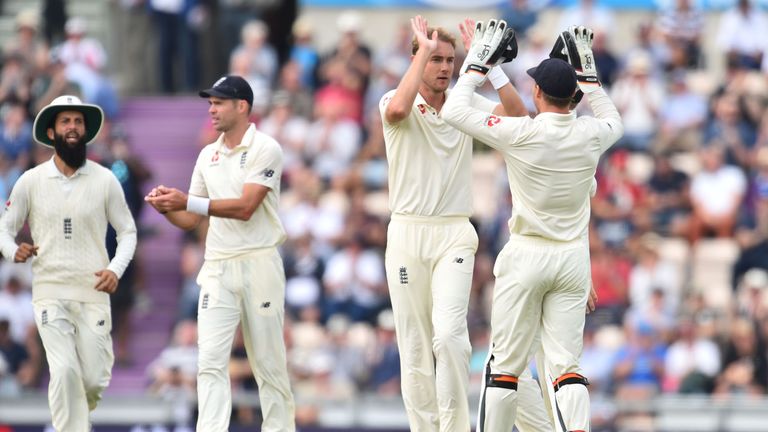 Moeen Ali spun out India's lower middle order as England battled back into the fourth Test on day two in Southampton.

The off-spinner (5-63) struck four times in three overs either side of tea as India made 273 in reply to the hosts 246, chiefly due to Cheteshwar Pujara's (132no) 15th Test ton and first in England, to lead by 27 on first innings.

Ali, recalled after his double century and six-wicket haul for Worcestershire in the Specsavers County Championship last week, dismissed Rishabh Pant (0), Hardik Pandya (4), Ravichandran Ashwin (1) and Mohammed Shami (0) as India slumped from 142-2 to 195-8 at The Ageas Bowl.

The 31-year-old completed his second five-for against India, having bagged 6-67 against them at this venue in 2014, when he ousted Ishant Sharma (14) but the tourists added 78 for their final two wickets, before Alastair Cook (2no) and Keaton Jennings (4no) survived four overs prior to stumps.

Pujara and Virat Kohli (46) had given India the upper hand in the morning session with a third-wicket stand of 92, during which Kohli became the second-fastest Indian, after Sunil Gavaskar, to 6,000 Test runs.

However, Sam Curran (1-41), the shining light in England's below-par batting display with a Test-best 78, picked up the big wicket of Kohli, before Ali's burst and Pujara's resistance left the game delicately poised. 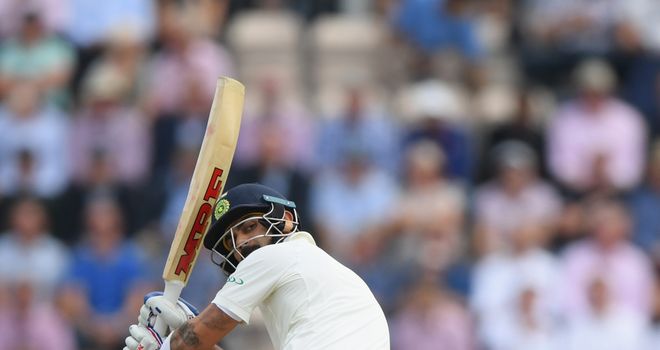 Kohli took his tally of runs for the series to 486 and topped 6,000 in his 119th innings, two more than it took Gavaskar but one fewer than Sachin Tendulkar, as his partnership with Pujara approached three figures.

However, the 29-year-old then edged behind as Curran angled a delivery across him - that dismissal triggering an alarming collapse from India, who trail 2-1 in the five-match series after their win at Trent Bridge.

Ajinkya Rahane, dropped by Joe Root at slip on five, was out lbw to Ben Stokes (1-23) for 11 from a booming in-swinger as the England all-rounder got just enough of his heel behind the line. 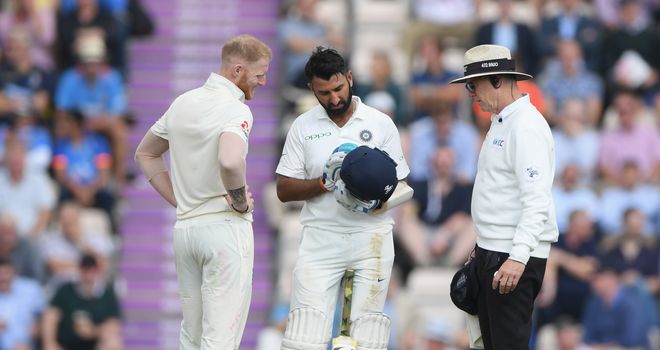 Cheteshwar Pujara received a blow on the helmet from Ben Stokes

Ali's golden spell began when he trapped Pant leg before on the stroke of tea with a ball that straightened and would have hit leg stump, Pant out for a 29-ball duck, a joint-record for India in a Test match.

Pandya was the next man to go, clipping Ali to Root at short midwicket, before Ashwin and Shami were bowled from successive balls.

Ali was eyeing his second Test hat-trick, having dismissed South Africa's Dean Elgar, Kagiso Rabada and Morne Morkel to win last summer's Oval Test, but Ishant (14) defended the hat-trick ball and went on to add 32 with Pujara before he edged to Cook at short leg.

Pujara's hopes of a maiden Test century against England looked in jeopardy at that stage - he was on 96 when last man Jasprit Bumrah strode to the wicket - but he reached three figures from 210 balls with a two to long-on.

Pujara and Bumrah (6) then frustrated Root's men for almost 14 overs before the latter gloved Broad to Cook at slip, Bumrah wincing in pain as Broad clocked him on the hand.

Watch day three of the fourth Test between England and India, at The Ageas Bowl, from 10am on Saturday on Sky Sports Cricket (channel 404) and Sky Sports Main Event (channel 401).