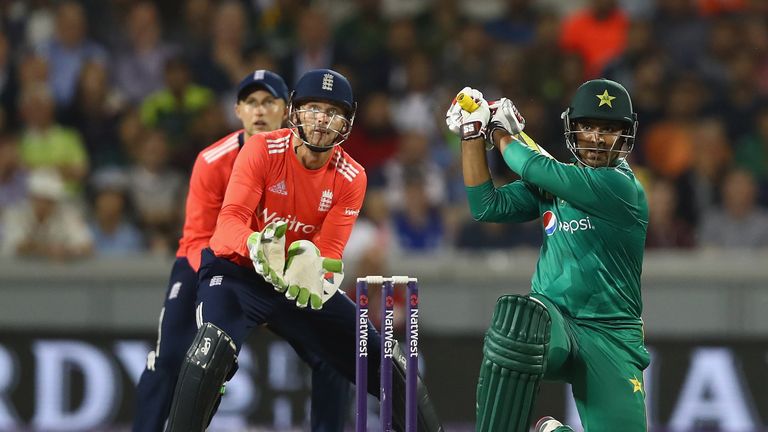 Pakistan ended their tour of England in rousing fashion with a crushing nine-wicket win in the only Twenty20 international, at Old Trafford.

England managed just one six on a flat pitch in their 135-7 as Imad Wasim (2-17) and Wahab Riaz (3-18) turned the screw after Jason Roy (21) and Alex Hales (37) combined to score 53-0 off the powerplay - the most runs ever scored by England off the first six overs without losing a wicket.

But the fightback was led by Imad, who removed both openers, before Wahab mixed up his pace to great effect as the boundary count dried up.

The innings rather imploded after Roy fell lbw and Hales was bowled hitting across an Imad dart, with Jos Buttler's 16 the next best score.

Joe Root (6) fell playing an upper-cut to third man, while Eoin Morgan (14) snicked behind attempting to run the ball to third man and Ben Stokes (4) - like Buttler (16) - picked out a fielder in the deep.

Pakistan's pursuit set off at a cracking pace as Sharjeel and Latif scored 36 all in boundaries, England paying dearly for dropping too short and wide too often.

Sharjeel, fresh from signing to play for Leicestershire in next year's NatWest T20 Blast, reached his second fifty in 12 T20s off just 30 balls when he swung Adil Rashid for a second six in the spinner's first over.

By then Pakistan were so far ahead of the rate that no risks were necessary - the 100-stand coming up off 9.3 overs with a single down the ground.

England avoided the ignominy of a 10-wicket defeat when Sharjeel swung hard at Adil Rashid and skied a catch to Moeen Ali, who caught the ball in his finger-tips at extra cover.

Latif also reached his fifty - the first of his T20 international career - with a six, advancing to strike Ali high over the rope and getting there off 36 balls before debutant Babar Azam (15no) hit the winning boundary to hand Sarfraz Ahmed victory in his first official T20 match as captain.

Watch highlights of the T20 international between England and Pakistan at midnight on Sky Sports 1.