The third and final Test between England and Pakistan gets under way on Friday from 10.30am, live on Sky Sports Cricket 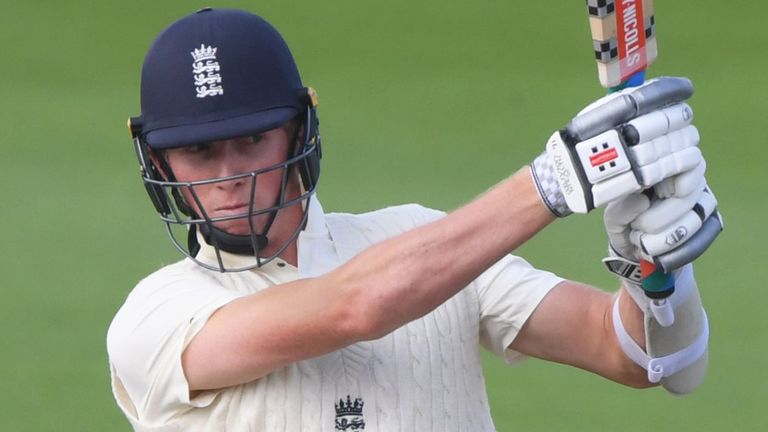 Zak Crawley strengthened his claim for England’s number three slot with a pugnacious fifty as the weather-affected second Test against Pakistan petered out into an inevitable draw.

Crawley, filling the position for only the second time, struck 53 - his third Test half-century - and shared a partnership of 91 with Dom Sibley when the match belatedly resumed on the final afternoon at the Ageas Bowl.

England took advantage of what was effectively an extended practice session, closing on 110-4 in response to Pakistan's 236. The draw means the home side maintain their 1-0 series lead, going into the third and final Test which starts on Friday.

Any prospect of a result on the final day - already slim after so much of the Test had been lost to bad weather - vanished entirely after an overnight thunderstorm soaked the outfield.

But, following four unsuccessful pitch inspections, umpires Richard Illingworth and Richard Kettleborough eventually decreed that play could resume at 3.20pm, with England on 7-1 - as they had been since midday on day four.

Crawley went straight into attacking mode when play finally got under way, pulling Shaheen Afridi for four and carving another short ball from Mohammad Abbas to the boundary. Pakistan's seamers took time to find their line but the youngest - and fastest - member of the trio, Naseem Shah, did cause problems for the batsmen, finding Crawley's outside edge only for the ball to drop short of first slip.

Incredibly, it was almost 4.45pm on the final day when spin made its first appearance in the Test, but both England batsmen immediately set out to get on top of Yasir Shah.

Using his feet effectively, Crawley plundered Yasir for two boundaries - although he was fortunate to survive on 37 when he charged the leg-spinner again and misjudged the ball, with Mohammad Rizwan failing to seize the stumping opportunity. The England batsman capitalised by heaving a short ball from Yasir to the fence to bring up his half-century, but he was on his way in the next over, lbw playing across the line to Abbas.

Abbas (2-28) then struck again in his next over, persuading Sibley (32) to nibble at a ball on leg stump and offer Rizwan a regulation catch.

Yasir (1-30) also picked up a wicket before the close, pinning Ollie Pope (9) on the back foot with a fast leg-break, with England unsuccessfully reviewing the decision, while Joe Root (9*) and Jos Buttler (0*) saw them to stumps. Each day of the Test was marred by poor weather conditions, with 134.3 the number of overs sent down - representing the seventh lowest total of deliveries for any Test match played in England.

It was the worst weather-affected Test in the country since 1987 - also a Test between England and Pakistan, when Mike Gatting's side posted 368 at Lord's.

The third and final Test of the series - also at the Ageas Bowl - gets under way on Friday from 10.30am, live on Sky Sports Cricket.