Moeen Ali took the first hat-trick by an England spinner in 79 years as they completed a 239-run victory over South Africa on day five of the third Test at The Oval.

The all-rounder had Dean Elgar and Kagiso Rabada caught at slip at the end of his 16th over before getting Morne Morkel lbw on review with the first ball of his next, to finish with figures of 4-45.

A typically dogged century from Elgar (136), his eighth in Test cricket, ensured England were made to work for the win but the final wicket was taken midway through the afternoon session to put Joe Root's side 2-1 up heading into the final match of the series at Old Trafford.

South Africa began the morning on 117-4 and, having been set a world record 492 to win, their only thought was to try and bat out the day to rescue a draw.

And they got off to a strong start in that regard as Elgar and Bavuma saw off the opening bursts from Ben Stokes and Stuart Broad.

However, Elgar could have been dismissed in the second over of the day as UltraEdge showed a small spike as the ball passed his bat on its way down the legside. England's appeal was muted and they opted against a review, allowing the opener to continue.

It took the introduction of Roland-Jones - and a very good review - to bring the breakthrough. Bavuma pushed forward to defend but the bowler was adamant that the ball had hit pad before bat and England called for a review. 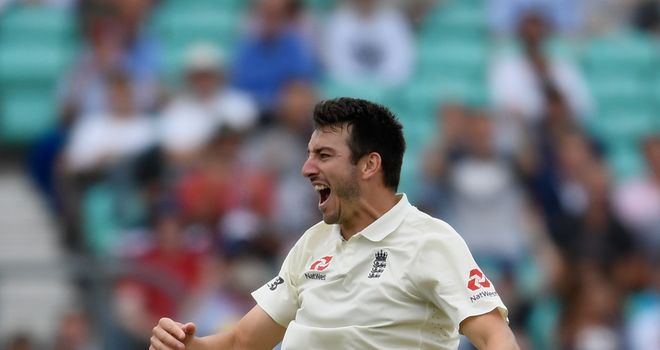 UltraEdge confirmed their suspicions and ball-tracking showed it was going on to hit middle to send Bavuma (32) on his way. There was no need for a review for the next ball though as Philander made a costly misjudgement, shouldering arms to a delivery that would have gone on to hit off stump.

He almost completed the hat-trick as Morris edged towards the slip cordon but the ball dropped just short of Stokes at gully.

Elgar hit Ali over mid-off for four in the next over to bring up a thoroughly deserved hundred and it looked as though he and Morris would see the Proteas through to lunch. 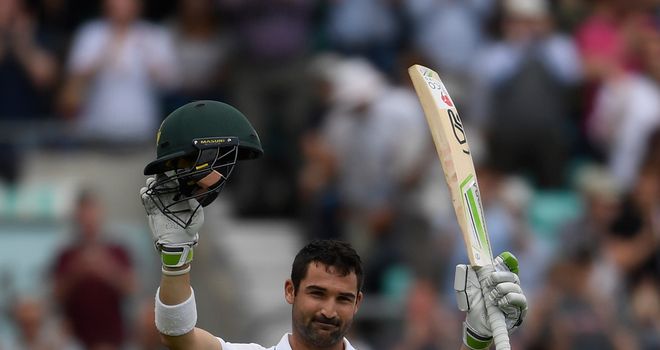 However, Ali was brought back for the final over of the session and with the last ball of the over, he found Morris' edge and Stokes took the catch at slip.

Keshav Maharaj came out and went on the attack after lunch, thumping three fours from a Roland-Jones over and Ali taking some tap at the other end.

Ali persisted though and was rewarded when Elgar went after a slightly wider delivery and nicked it to Stokes as the ball spun out of the rough.

The same pair combined for the third time in the day as Ali found the edge once more, Rabada pushing forward and Stokes taking a straightforward catch.

Maharaj did his bit for his fellow spinner by playing out the next over from Stokes, allowing Ali the chance to complete his hat-trick against Proteas No 11, Morne Morkel. 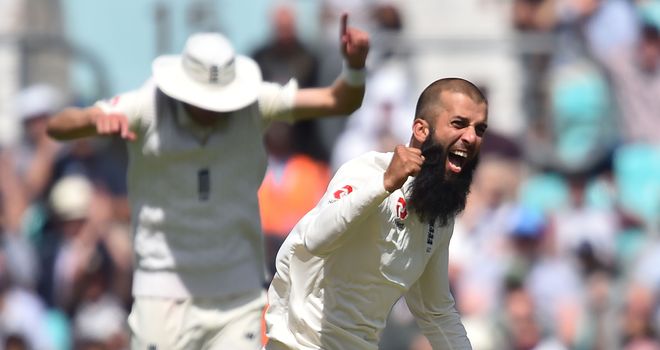 He got the delivery just right, pitching it in line to the left-handed Morkel and getting the ball to straighten. The ball thudded into the front pad and after the umpire turned down the appeal, England swiftly reviewed.

DRS confirmed the ball was going on to hit the stumps to spark jubilant scenes in the middle as Ali celebrated the first hat-trick by an England spinner since Tom Goddard, also against South Africa, in 1938/39 and the first ever in a Test match at The Oval - a fitting end to the stadium's 100th Test.