Jos Buttler hit an unbeaten 73, his highest T20I score, as England cruised to victory over Sri Lanka by eight wickets at the Ageas Bowl.

Opening the batting for the first time in a T20I, the wicketkeeper-batsman was given a lifeline when he was on just five as he was given not out, despite appearing to feather one behind.

Buttler took full advantage and guided Eoin Morgan's side over the line with more than two overs to spare.

Morgan himself finished 47 not out after England had bowled Sri Lanka out off the final ball of their innings for just 140 - all-rounder Liam Dawson taking 3-27 on his debut and Chris Jordan picking up 3-29.

Tuesday's result means England have beaten Sri Lanka in all three formats without losing a game during their tour.

All eyes were on Tymal Mills at the start of the Sri Lanka innings and the crowd did not have to wait long to see him, the left-arm quick sharing the new ball with Jordan and clocking over 90mph from the off.

It was another fast bowler who made the breakthrough though, Liam Plunkett (2-27) having Kusal Perera caught at short fine leg by Mills.

Undeterred, Danushka Gunathilaka and Kusal Mendis helped Sri Lanka to 51-1 at the end of the powerplay despite some rather frenetic running between the wickets. 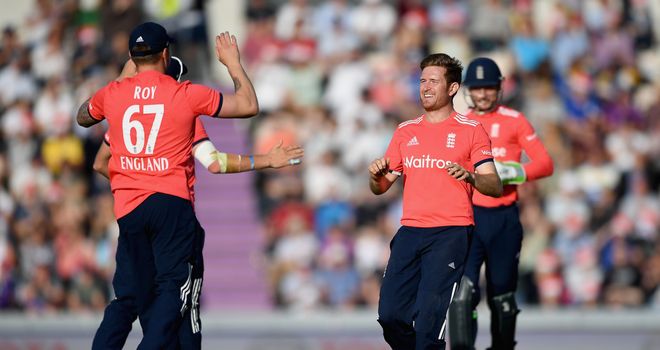 Liam Dawson had a debut to remember, taking 3-27

Dawson was introduced into the attack in the seventh over and by the end of his third over, he had turned the innings on its head.

The left-arm spinner had Gunathilaka (26) caught in the deep in his first over, caught and bowled Mendis (21) in his second and cleaned up Angelo Mathews (11) in his third with Dasun Shanaka run out by Jason Roy in the same over. From 58-1, Sri Lanka were suddenly 82-5.

That left Dinesh Chandimal and Ramith Rambukwella (19) to try and rebuild the innings although the latter showed little interest in anything other than trying to hit the ball out of the park; a feat managed just once, against Adil Rashid, having been bamboozled by the leg-spinner for much of his previous over.

He was eventually run out after more less than impressive running between the wickets, a theme that ran through the entire innings.

Jordan finished off the innings in style picking up the wickets of Farveez Maharoof and Nuwan Pradeep in successive balls having removed Chandimal (23) in his penultimate over.

Roy (0) was bowled by Mathews in the first over and the Sri Lankan skipper had James Vince (16) stumped to leave England 30-2 in the fifth.

They will feel the hosts should have been three down after Snicko confirmed that Buttler had edged one through to Chandimal off Mathews but not out was the umpire's decision and with no DRS available, the England opener remained.

He made the most of his good fortune and, from then on, rarely looked troubled as he bludgeoned four sixes and three fours without ever really having to hit top gear.

After a stuttering start, Morgan too found his timing and he sealed the win with a big six over midwicket in the 18th over.