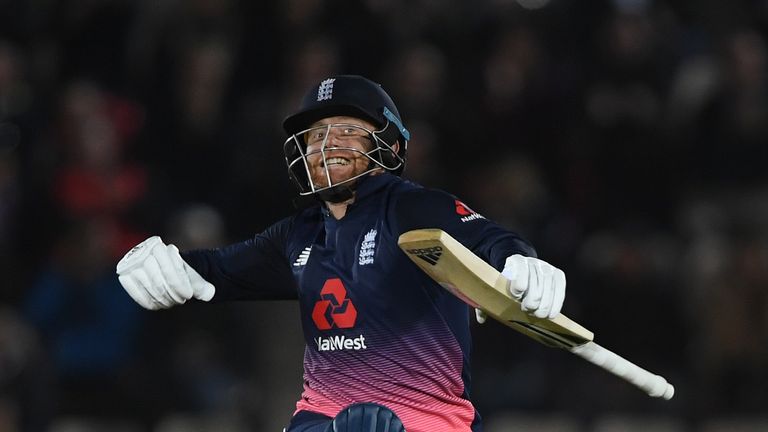 Jonny Bairstow hit his second ODI century as England rounded off their summer with a comfortable nine-wicket win over the Windies.

Needing 289 to win, Eoin Morgan's side eased home for 12 overs to spare at the Ageas Bowl to take the five-match series 4-0.

An opening stand of 156 set the tone and although Jason Roy, the chief aggressor early on, fell four short of his century, Bairstow went through to his second ton of the series and finished unbeaten on 141, the highest ODI score by an Englishman against the Windies, as England signed off with a comprehensive win.

Chris Gayle had earlier smashed 40 from 29 balls in what may prove to be his final innings in England but after England's spinners put the squeeze on in the middle overs, the Windies' 288-6 looked well below par on a good surface.

Having played out a maiden to start the match, Gayle's early onslaught came out of the blue. A sudden change of gear caught Jake Ball by surprise as shown by a run of five sixes and a four in six deliveries, across two overs. 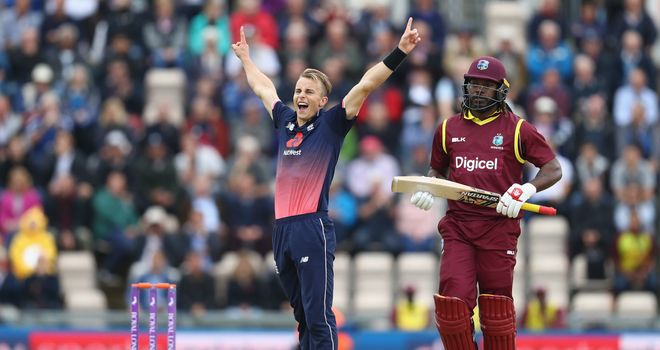 Tom Curran (1-62), on his ODI debut, came to his new ball partner's aid though, producing a perfectly-executed slower ball that Gayle hit straight up but still required an excellent catch from Liam Plunkett, over his shoulder as he ran across from mid-off.

That brought the Hope brothers, Kyle and Shai, together in the middle and while the explosive power of Gayle was lacking, there were the beginnings of an encouraging partnership before another fine catch from Plunkett cut it short.

The England paceman took the grab one-handed to his left, off his own bowling, after finding Kyle Hope's leading edge.

It was then that England's spinners - Adil Rashid and Moeen Ali - were introduced in tandem and any remaining Windies momentum came to a shuddering halt.

After more than an hour without a boundary between Shai Hope and Marlon Samuels (32), the latter finally got the ball to the fence but was gone soon after as he charged past a flighted Ali (1-36) delivery and was stumped.

Plunkett (2-54) returned to bowl Rovman Powell (11) and while some powerful late hitting from debutant Sunil Ambris (38no off 27 balls) and Ashley Nurse (31no off 12 balls) gave the Windies a glimmer of hope, they still looked some way short of a score to challenge England.

So it proved as Roy and Bairstow made a flying start, scoring at more than seven-an-over during the powerplay and staying at that close to that rate throughout their partnership. 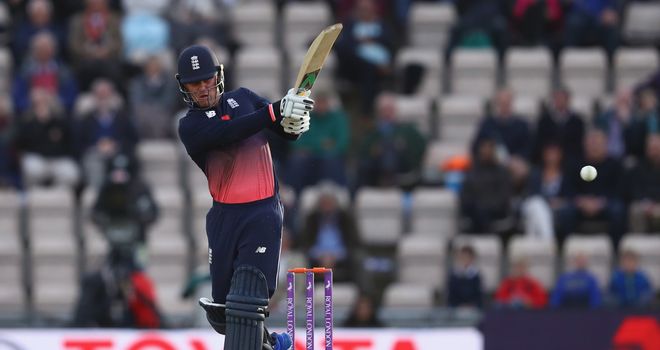 Jason Roy batted superbly for his 96 from 70 balls

Roy was determined to play his shots from the off and soon moved past 50 while Bairstow was happy to push the singles, while punishing the bad balls when they came along.

Between them, they had soon added 156 and Roy looked set for a fourth ODI hundred. However, he was unexpectedly trapped lbw by Miguel Cummins in the 22nd over, bringing Joe Root to the crease.

The England Test captain was as busy as ever but with Roy gone, Bairstow took charge and reached his century from 90 balls before kicking on again.

A flurry of boundaries brought the game to a swift conclusion with Root (46no) thumping a straight six to seal the win.