Jermaine Blackwood profited from three dropped catches to extend his excellent record against England and secure West Indies a four-wicket victory in the first #raisethebat Test at The Ageas Bowl.

The Jamaican (95) arrived at the crease with his side - set 200 to win after dismissing England for 313 earlier on day five - reeling on 27-3 and having also seen opener John Campbell retire hurt on one after being blasted on the toe by Jofra Archer (3-45) during the quick's cracking opening spell.

Blackwood - who averages 55 against England in Tests - was spilled on five, 20 and 29 by Ben Stokes, Jos Buttler and Rory Burns respectively before he chipped Stokes to James Anderson at mid-off with 11 runs required, threatening a late twist.

However, Campbell (8no) returned at 189-6 and received a blow on the grille from Mark Wood before he clattered Stokes to the fence to take the scores level and then flicked away the winning single in the company of captain Jason Holder (14no).

West Indies moved 1-0 up in the three-match series and ensured Stokes suffered defeat in his first match as England captain, having deputised for regular skipper Joe Root.

Stokes had given England hope when he removed Shane Dowrich (20) - a ball after having the wicket of the batsman chalked off for overstepping - to leave West Indies 168-5 and still needing a further 32 runs.

But any hopes of the all-rounder producing a Cape Town-esque salvo with the ball were foiled, principally by Holder and Blackwood, despite the duo's running between the wickets being somewhat dicey. 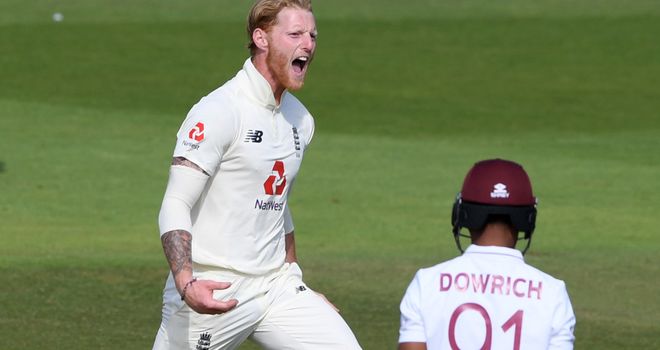 Ben Stokes' two late wickets came in vain for his side

Blackwood, playing just his second Test since 2017, was the hero, putting on 73 with Roston Chase (37) after Windies' horror start before Chase was caught behind off a brutish bouncer from Archer, who had gone wicketless from 22 overs in the first innings in Southampton.

Blackwood then added 68 with Dowrich and 21 with his captain to propel Windies to just their second Test victory away from home since Shai Hope, Kraigg Brathwaithe and a few lusty blows from Blackwood himself earned the tourists a famous win at Headingley in 2017.

West Indies will look to wrap up a first Test series victory in England since 1988 in next week's second match at Emirates Old Trafford, a game for which Stokes will revert to vice-captain with Root ready to return after missing the series opener for the birth of his second child. 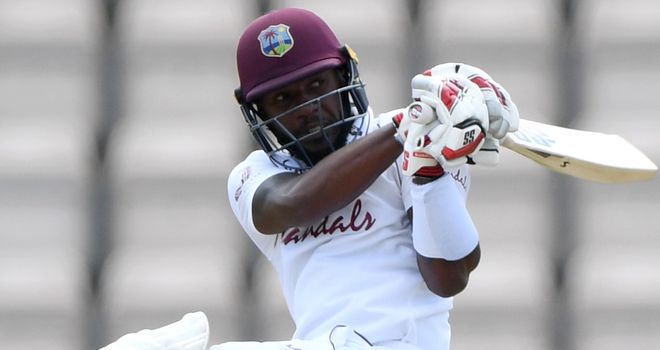 Blackwood has a superb Test record against England

Stokes' men were 59 per cent favourites with WinViz after some dashing strokeplay from Archer (23) had lifted them from their overnight 284-8 to 313 all out and a lead of 199 - Shannon Gabriel (5-75) wrapping up the innings by having Mark Wood (2) and Archer caught behind en route to his sixth Test five-for and nine wickets in the match.

England's victory chances swelled even further when Archer bowled Brathwaite (4) off an inside edge after the batsman prodded tamely and pinned Shamarh Brooks (0) lbw from a ball that shaped in and Wood then clattered the off peg of Hope (9) in the 12th over. Jofra Archer picked up three wickets, including Roston Chase from a brutish bumper

It was 24 overs before the next wicket, though - that ferocious Archer bumper to dismiss Chase - with England spurning a glut of opportunities.

Blackwood was the chief beneficiary, with Stokes (slip), wicketkeeper Buttler and Burns (gully) failing to cling on to catches - Stokes' chance was tough but Buttler and Burns should have done better, particularly Buttler when Blackwood gloved Stokes down the leg-side.

Chase survived a tight lbw review on eight - the decision remaining umpire's call with off-spinner Dom Bess' delivery only set to clip the bails - while Zak Crawley fumbled a run out chance at cover after a mix-up between Chase and Blackwood midway through the second session. 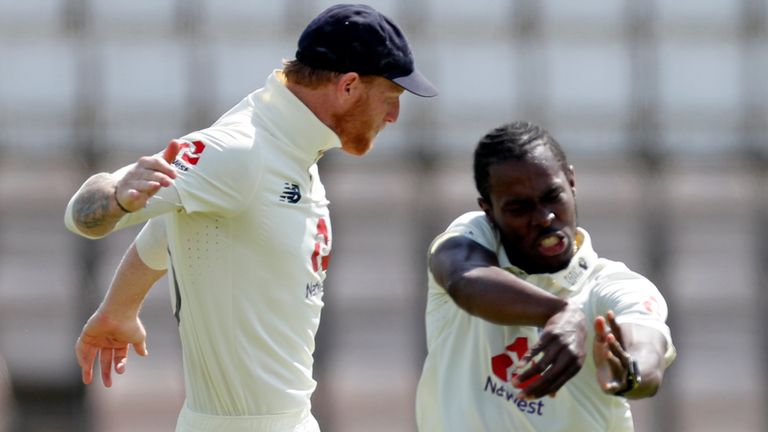 Archer's reintroduction brought about the end of Chase but he was unable to add Dowrich to his list of victims with the Windies wicketkeeper successfully overturning a caught-behind dismissal on five with Archer's delivery having brushed his elbow not his bat - Archer was also foiled when a review to have Dowrich caught down the leg-side after tea came in vain.

Stokes did dismiss Dowrich, however, with Buttler gathering behind the stumps, one delivery after Sibley had caught the batsman at slip off a Stokes no-ball.

England managed one more wicket - Blackwood falling five runs short of a second Test century, having hit his first, an unbeaten 112, against the same opposition in Antigua in 2015.

The home team battled hard but their 114-run deficit after first innings - Stokes' side rolled for 204 before Windies countered with 318 - proved too significant.