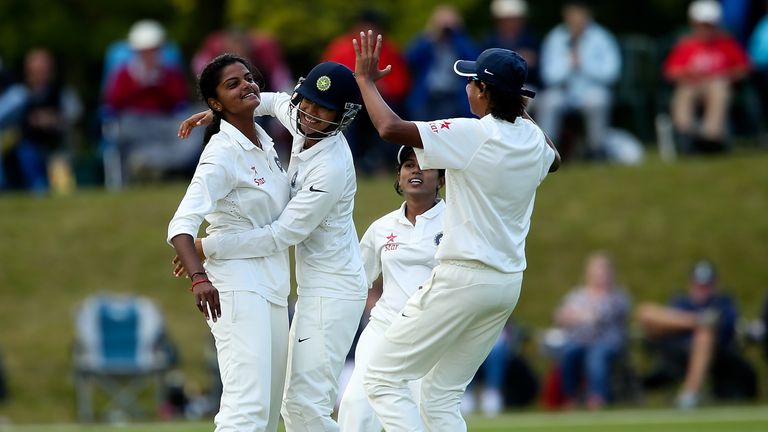 India Women seized the initiative against England Women in the one-off Test match at Wormsley.

Nagarajan Niranjana made a dream start to her Test career on the opening day with four wickets as England were strangled out for a paltry 92, which included a new world record of seven lbw decisions in a women's Test innings, before the hosts hit back to reduce India to 87-6.

It was Niranjana who made the breakthrough in the fourth over after India had decided to field, with Heather Knight trapped in front, while the bowler also accounted for fellow opener Lauren Winfield, England captain Charlotte Edwards and Lydia Greenway.

Sarah Taylor provided some resistance with a fluent 30 off 42 balls, but Tammy Beaumont (12) and Natalie Sciver (10) were the only other batters to reach double figures, with England succumbing to their lowest ever total against India in 41.2 overs.

However, Jenny Gunn ensured it was not a disastrous day for Edwards' side with an excellent display of swing bowling to finish the day with figures of 12-6-13-4, already her best in the longest form of the game.

After Thirush Kamini and Smriti Mandhana had seen off England's opening bowlers to progress to 40 without loss, Gunn made the breakthrough when the former was caught behind for 17.

Mandhana departed in the same manner after making 22, while Gunn also accounted for India captain Mithali Raj and Harmanpreet Kaur, both trapped in front, with Kate Cross and Anya Shrubsole claiming the other wickets.

Having slipped to 64 for six, India were in danger of a complete collapse, but Niranjana and Jhulan Goswami put on an unbroken 23 to put the tourists on the front foot and within sight of taking a first-innings lead.

India's women are playing their first Test since 2006.