Stokes' 98-ball knock rescued England from 86-4 and saw them tie New Zealand's 241-8, despite the fact they required 15 from the final four deliveries of their regulation 50 overs.

The all-rounder and Jos Buttler managed 15 runs from Trent Boult's Super Over and, despite Jimmy Neesham smashing Archer for six from the second ball of the England bowler's Super Over, the Kiwis could only get one of the two runs they required from the last ball as they matched the hosts' total and lost by virtue of hitting fewer boundaries in the match - 17 to England's 26.

Eoin Morgan's men, therefore, completed their remarkable turnaround since being dumped out in the group stage of the previous World Cup. Stokes and Buttler (59 off 60) shared a 110-run stand for the fifth wicket for England but after Buttler fell and Chris Woakes (2), Archer (0) and Liam Plunkett (10) came and went, and Boult's first two balls of the 50th over were dots, New Zealand seemed on the verge of victory.

However, Stokes slog-swept Boult for six and then picked up six more as Martin Guptill's throw from the deep deflected off the England man's bat and raced to the boundary after he had already run two.

Adil Rashid was run out from the penultimate ball, while Mark Wood fell in similar fashion from the final delivery with Boult - who had gifted Stokes six runs in the 49th over after treading on the boundary rope while attempting to parry a catch at long-on - whipping off the bails at the non-striker's end as England failed to complete a second run. 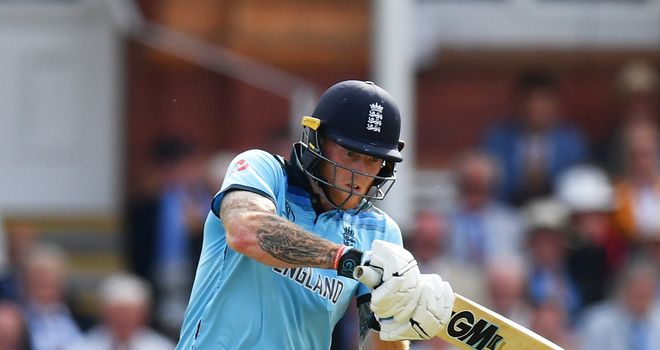 Ben Stokes was a hero as England won the World Cup

However, England's boundary total after the Super Over ensured they won just their second ICC tournament, after the 2010 World T20, and made it fourth time lucky in a 50-over World Cup final after suffering heartbreak in 1979, 1987 and 1992.

Plunkett (3-42) earlier picked up the key wickets of Kane Williamson (30) and Henry Nicholls (50), while Woakes (3-37) also impressed as England contained the Black Caps after losing the toss.

New Zealand, still awaiting their first World Cup title after losing the final for the second straight tournament, were in a decent spot at 103-1 in the 23rd over - Williamson electing to bat, despite rain delaying play by 15 minutes.

But the Kiwi captain then fell to Plunkett on review - England were adamant Williamson had snicked a cross-seam delivery and were proved right by DRS, with on-field umpire Kumar Dharmasena's decision overturned. Plunkett soon forced Nicholls - who had successfully overturned an lbw dismissal against Woakes on nought - to drag on to his stumps in the 27th over and New Zealand were unable to score freely from that point.

Ross Taylor (15), who may have been able to inject some impetus, was unfortunate to fall lbw to Wood - Wood's delivery would have bounced over the stumps but Guptill (19) had already burned the Black Caps' review when he was trapped lbw by Woakes in the seventh over.

Boult intensified any jitters England were feeling when he hit Jason Roy on the pad from the first ball of the chase, only for Marais Erasmus' not-out decision to stand with not enough of the ball hitting leg stump.

Boult also came close to bowling Roy (17) with a swinging yorker, while new-ball partner Henry beat the opener's inside edge and almost forced Jonny Bairstow to drag on before Roy nicked him through to wicketkeeper Latham with the score on 28 in the sixth over. Bairstow (31) was also dropped on 18 as De Grandhomme spilled off his own bowling but the seamer atoned when he removed Joe Root (7), who had missed with a wild leg-side heave the previous ball - De Grandhome (1-25) going at just 2.5 runs an over as England limped to 115-4 after 30 overs.

Bairstow had chopped on from a back-of-a-length ball from the excellent Lockie Ferguson (3-50), who went on to graze Morgan's helmet with a rapid bouncer and then dismiss the England skipper (9) with an excellent catch running in from deep point after Morgan attacked Neesham's first delivery.

Stokes and Buttler, key components in England's rise in recent years, dragged their team back into control, though - New Zealand losing their review when they wanted Buttler lbw to Henry on 25 with the ball shown to be missing leg stump.

Buttler responded a few overs later by ramping Henry exquisitely for four, before he and Stokes completed their half-centuries from 53 and 81 deliveries respectively, but he then slashed Ferguson to sub fielder Tim Southee with 46 runs required, sparking a quite sensational finish.

The last act was Buttler running out Guptill at the keeper's end after Roy had thrown in from deep midwicket, which was cue for wild celebrations among England's players, who have gone from white-ball strugglers to trailblazers and world champions in the space of four years.