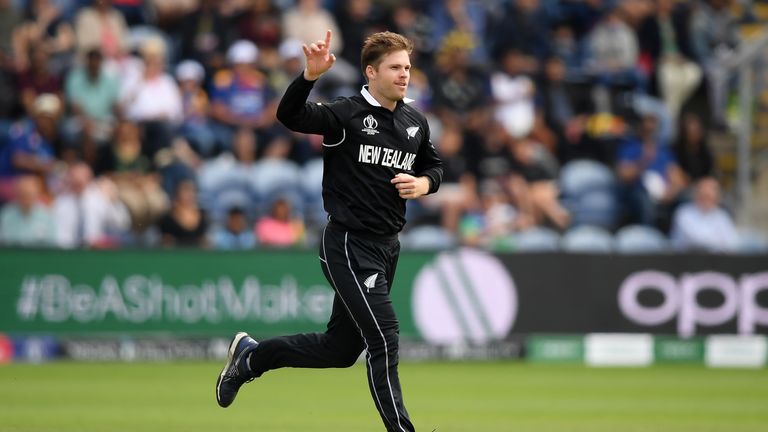 A dominant display from New Zealand's bowlers saw them rattle out Sri Lanka for just 136 in Cardiff en route to an emphatic 10-wicket win in their opening World Cup match.

Despite being without pace duo Tim Southee and Henry Nicholls, the Black Caps required just two balls to claim their first wicket after being asked to bowl first.

Matt Henry removed Lahiru Thirimanne (4), Kusal Perera (29) and Kusal Mendis (0) to reduce Sri Lanka to 46-3 inside the opening powerplay before Lockie Ferguson pouched an impressive 3-22 to decimate the batting line-up.

Captain Dimuth Karunaratne struck an unbeaten 52, becoming only the second player to carry their bat through a World Cup innings, after West Indies' Ridley Jacobs' 49no against Australia in 1999 at Old Trafford, but he could do little to abate the collapse at the other end as his side were bowled out in 29.2 overs.

In response, Martin Guptill (73no) and Colin Munro (58no) struggled to play as fluently as they are accustomed to but the pair hit unbeaten half-centuries to reach their target in just 16.1 overs.

The game in Cardiff was in the same vein as the two World Cup matches that had preceded it, with New Zealand's pace bowlers dominating.

A wayward opening delivery from Henry was punished as Thirimanne picked up a boundary off the first ball of the innings but the seamer trapped the batsman in front next ball and eventually earned his first scalp of the match when a review showed the ball hitting leg stump.

Perera struck four boundaries in his brief innings but was undone by a fuller delivery from Henry, succeeding only in sending the ball high into the sunny sky, with De Grandhomme doing well to claim the catch.

The fast bowler had his third wicket as Guptill claimed a fine catch at third slip to remove Mendis for a golden duck before Lockie Ferguson entered the attack and made an immediate impact as he rapped Dhananjaya de Silva (4) plumb in front. 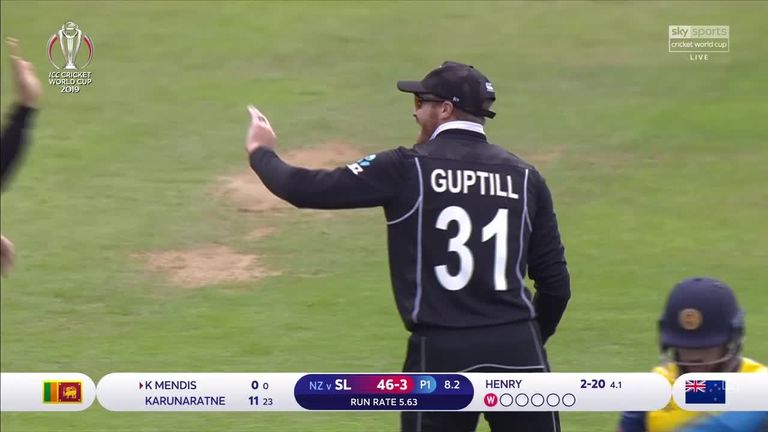 Jeevan Mendis was caught well at gully to give Ferguson his second wicket before Thisara Perera (27) and Karunaratne put on a battling 52-run seventh-wicket partnership.

However, when spinner Mitchell Santner had Thisara caught at long-on, Sri Lanka lost their final four wickets for just 24 runs - Ferguson bowling Lasith Malinga to wrap up the innings.

And, despite New Zealand's openers not being at their flowing best, with the ball often getting stuck in the pitch, Guptill brought up his half-century with a huge six as the Black Caps cruised home with 203 balls remaining.

"You want to build that momentum early," said Guptill. "Our bowlers did that from the front and made it difficult for Sri Lanka.

"If we bowl first in the next few games then hopefully we can continue to do that.

"If we come out with a bit of freedom with the bat like we did, I think we can have a successful tournament."

Sri Lanka skipper Karunaratne added: "You have to give New Zealand credit for the way they bowled. We could not build partnerships and we kept losing wickets.

"We have to keep our chin up now and I'm sure that if we build some good partnerships we can do well."