Sam Billings and James Vince impressed for a much-changed England as the tourists won the first T20I against Pakistan by 14 runs in Dubai.

Billings (53) clobbered a 24-ball fifty, while Vince stroked 41 from 36 deliveries on debut after the pair were called into the side for the rested Joe Root and Jos Buttler. 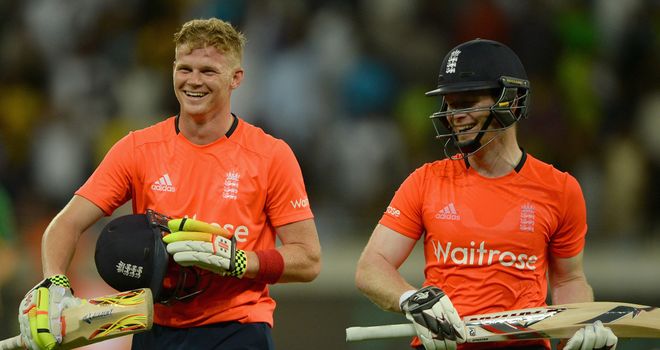 Billings and Vince's innings, coupled with an unbeaten 45 from skipper Eoin Morgan, saw England post 160-5, a total that proved beyond Pakistan, who could only muster 146 all out due largely to Liam Plunkett (3-21) and Reece Topley (3-24).

England's knock started sluggishly, the visitors losing openers Jason Roy (9) and Alex Hales (8) - the latter after he had been dropped twice off the same ball by Sohail Tanvir (2-31) - as well as Moeen Ali (0) to stumble to 19-3.

However, Vince - the top run scorer in 2015 NatWest T20 Blast with 710 runs at 59.16 for Hampshire - and Morgan clobbered a partnership of 76 in 10.1 overs, Vince hitting six boundaries as well as a six off left-armer Imran Khan.

Billings played beautifully after Vince was castled by the pacey Wahab Riaz (1-33), the Kent star playing like the man he replaced, Buttler, with a leg-side flick for six and a monstrous maximum over midwicket as England racked up 93 runs from the last 10 overs and 65 from the last six.

Billings was run out from the final ball of the innings and then shelled a sharp, high chance behind the stumps in the opening over of Pakistan's knock, 39-year-old debutant Rafatullah Mohmand the man to profit.

England were soon in the wickets, though, Reece Topley having Sarfraz Ahmed (1) caught in the deep by Plunkett before the seamers switched roles to dismiss Mohammad Hafeez (7), Plunkett had Rafatullah (16) caught by Billings, and Stephen Parry bowled Mohammad Rizwan (6).

Sohaib Maqsood (24) and Umar Akmal (19) shared a 32-run stand but when the latter was run out in comical fashion as both batsmen sprinted for the bowler's end, Shahid Afridi (0) fell for a duck, and Sohaib was stumped, the hosts' hopes seemed all-but over at 75-7.

Tanvir (25no), Wahab (21) and Anwar Ali (20) gave England a scare but needing 20 to win from Topley's final over, Pakistan amassed just five before Topley polished off the innings with the last ball, Imran snicking behind.

England 'keeper Sam Billings: "It was enjoyable to make a contribution in a winning side having been on the sidelines and watched the boys smash it everywhere. Credit to Morgy who told me to play the way I've done to get to this point."

England skipper Eoin Morgan: "We showed a lot of character after being 19-3. It's a good sign when players who haven't played come in and are champing at the bit to perform in front of everyone. I am very proud of the guys."

Pakistan captain Shahid Afridi: "I don't have any excuses. Our bowlers did well, especially in the first six overs, but Morgan played very maturely and then I think we batted very poorly after being set a chaseable total."

Watch the second T20I between Pakistan and England from 3.30pm, Friday, Sky Sports 2.