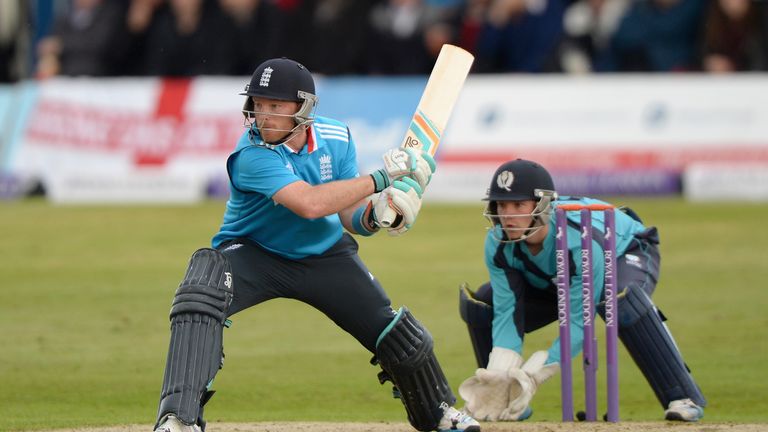 Ian Bell on his way to a half-century

England beat Scotland by 39 runs in a rain-shortened One-day international in Aberdeen.

After a frustrating day of heavy showers in the north of Scotland, the teams were forced to settle for a 20-over game as the skies cleared in the early evening.

England posted 167-6 from their 20 overs, Ian Bell top-scoring with 50 from just 34 balls, while skipper Alastair Cook contributed 44 at just over a run-a-ball.

Chasing a Duckworth-Lewis adjusted 173 in reply, Michael Leask gave England a mid-innings scare as he smashed 42 from just 16 balls, but once he was caught attempting his sixth maximum on the boundary by Jimmy Anderson off James Tredwell, the Scotland innings subsided to 133-9.

Despite coming in for some punishment from Leask, spinner James Tredwell finished an eventful spell with his best ODI figures of 4-41.

Bell and Cook set the platform for England, while Eoin Morgan also weighed in with a handy contribution, as did Joe Root, to put the onus on Scotland to bat well after putting their visitors in.

Bell's third half-century in five ODI innings came in just 33 balls, contained four fours and two sixes and took him second behind only Paul Collingwood in England's all-time list of 50-over runscorers.

The destiny of this season's Premier League title will be decided LIVE on Sky Sports this Sunday - just one piece of drama playing out on a wonderful weekend of sport. Add in the Spanish Grand Prix, the Sky Bet Football League play-offs, the Players Championship, La Liga title race and more and Sky Sports is the only place to be. You can upgrade to Sky Sports or buy a day pass through NOW TV to watch all this fantastic live action.

His first maximum, up the wicket to Majid Haq's off spin and struck over long off, brought up England's 50 in the ninth over.

But as soon as he reached his own 50, he was gone next ball - down on one knee to try to manufacture a sweep off left-arm seamer Rob Taylor and bowled round his legs.

Morgan had time to join Cook and time Taylor for a sweet boundary past mid off to get off the mark second ball, before - having already played through 15 minutes of heavy rain - the players had to leave the field, with the total 87-1 in the 12th over.

Cook and Morgan returned, the former moving to within one hit of his 50 but very well-caught trying to do so - by a diving Calum MacLeod at long off to give Taylor a second wicket.

Taylor pulled off another outstanding catch to snuff out the threat from Jos Buttler, at deep midwicket, off Josh Davey (3-28).

But with Morgan also gone caught-behind, Root reached 17 off just six, until he holed out in the deep too, as Scotland kept holding their catches.

Chris Jordan hit the only ball he faced for six over long on to end the innings and Anderson then soon undermined Scotland's run-chase by seeing off both openers in his first two overs.

Matt Cross chopped on, and MacLeod went across his stumps and was bowled round his legs.

Anderson would have made it three had wicketkeeper Buttler not dropped Kyle Coetzer on one.

But there was still to be no innings to remember for the Scotland captain on his home ground, because he was bowled sweeping at Tredwell via a deflection off his arm.

A 10-over score of 55-3 suggested only the margin of England's victory remained in doubt, weather permitting.

Leask had other ideas, taking particular toll of Tredwell with some towering blows as he hit five sixes and two fours from just 16 balls.

But the off-spinner had the last laugh when another attempted big hit resulted in a catch for Anderson at deep midwicket - and Tredwell then took two more wickets in the last of his four overs to keep England comfortably in control.