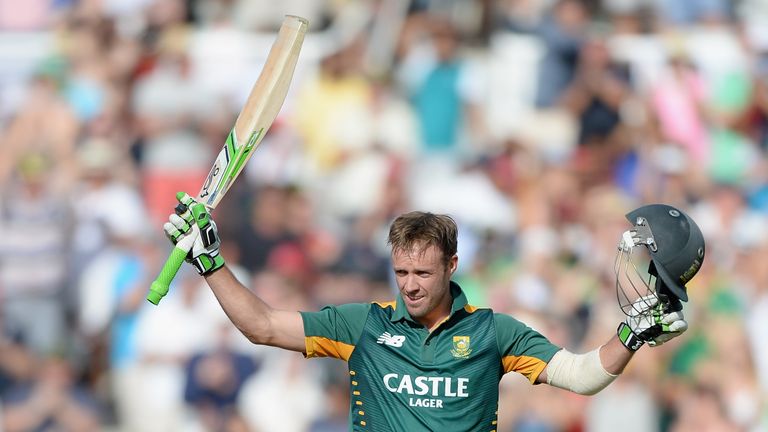 AB de Villiers celebrated his 200th cap with a series-clinching century as South Africa completed a stunning turnaround by claiming a series-winning, five-wicket victory over England in the fifth one-day international.

South Africa duly became only the third team in ODI history to win a series of five or more matches after suffering defeat in the opening two games.

England, for their part, missed out on becoming the first touring team to claim Test and ODI series wins on South Africa soil since Australia in 2001/02.

Eoin Morgan's men paid the price for a largely brittle batting display carried by Alex Hales, who struck a career-best 112 but ran out of partners as Kagiso Rabada, Imran Tahir and David Wiese picked up three wickets each.

Opener Hales struck his second ODI hundred off 116 balls - eclipsing both the 99 he scored earlier in the series at Port Elizabeth and passing his previous best score of 109, made against Pakistan in Abu Dhabi in 2015.

His final tally of 383 is a record for the most runs ever scored by an Englishman in a five-match ODI series.

Hales shared stands of 61 and 70 with Joe Root and Ben Stokes (29) respectively but no other batsman made 15.

Out-of-form skipper Eoin Morgan quickly came and went - flailing wildly at a wide Wiese delivery and snicking through to end the tour on 66 runs from five knocks, leaving England wobbling on 85-3.

It might have been worse but Hales posted his fifty in rather fortunate fashion by snicking his 56th ball for four past leg stump, becoming the fifth Englishman to score five ODI fifties in a row after Geoffrey Boycott, Graham Gooch, Alec Stewart and Jonathan Trott.

Ben Stokes, back at the scene of his historic double-hundred in the Test series, looked unsettled against Tahir initially before growing into the game and striking the spinner for six.

He added 70 with Hales in 11 overs before walking across his stumps to be bowled behind his legs by Kagiso Rabada, sparking a slump in which five wickets fell softly for 37 runs.

Jos Buttler was bowled for his second golden duck of the series, Moeen Ali and Adil Rashid drove tamely and Chris Woakes flicked to fine leg.

Rilee Rossouw, back in the side for JP Duminy, also failed when he drove the left-armer tamely to Hales at short extra cover.

At 22-3 the series, let alone the match, was in the balance - Topley taking centre stage with three wickets for four runs in nine balls.

It took a composed century stand from De Villiers and Amla to turn the tide before Wiese (41no) sealed victory with successive boundaries off Woakes.

Watch the first Twenty20 international between South Africa and England live on Sky Sports 2 from 3.30pm on Friday.