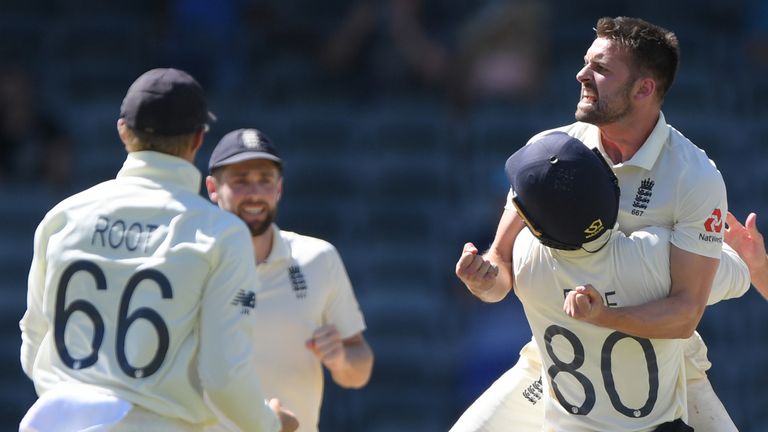 Highlights from the fourth and final day of England's tour of South Africa.

England clinched a 3-1 series win over South Africa with a 191-run victory in the fourth Test, despite a determined batting display from the hosts on the fourth day in Johannesburg.

England were frustrated for much of the afternoon as Rassie van der Dussen - who fell two short of a maiden Test century - and Faf du Plessis put on 92 for the third wicket to briefly ignite hopes of the Proteas pulling off a record run-chase of 466.

But, the wickets of both shortly before tea - Du Plessis (35) departing to the golden-armed Ben Stokes (2-47) and Van der Dussen (98) to Mark Wood (4-54) - opened an end up for England and they swiftly ran through South Africa's lower order in the final session of the day.

The two teams next face-off in a three-match ODI series, which starts on Tuesday, February 4 in Cape Town.

Giving hint to what would be a real testing day for the tourists in sweltering heat, South Africa's openers Pieter Malan and Dean Elgar saw off the early threat of the new ball, blunting England's pace attack for the first hour of play.

But, with the very first ball after a drinks break, England finally had their first breakthrough, Malan (15) tempted in to edging a wide, shaping Chris Woakes (1-47) delivery to Stokes at second slip.

Woakes thought he quickly had a second, with Van der Dussen given out lbw later in the same over, but the decision was overturned on review, shown to be bouncing too high.

South Africa again dug in, Elgar and Van der Dussen sharing in a fifty stand, only for England to take another wicket at a key moment, on the stroke of lunch, with Stokes bouncing out Elgar (24).

The afternoon session proved to be just as frustrating for England, albeit the fourth-day wicket finally began to deviate and, just as it looked like they might go wicketless through to tea, Stokes bowled Du Plessis off the inside edge on one such delivery that kept low.

Van der Dussen soon followed as, closing in on a well-deserved maiden Test ton and eyeing up a boundary through the covers to take him to the milestone, he hit a tempting full ball from Wood straight to the man at short cover.

Quinton de Kock (39) and Temba Bavuma (27) went on a boundary offensive after the tea break in a desperate attempt to reel in their epic target needed to share the series, but their fun was ended by a rip-snorter of a bouncer from Broad (2-26).

Short, sharp and rearing up at the diminutive Bavuma, Broad's delivery had him leaping in the air and sprawled on the deck after he got a glove on it behind to Jos Buttler.

Broad then added Dwaine Pretorius for two, caught out in the deep off another banged-in ball, bringing Vernon Philander to the crease in his final Test appearance as he retires from international cricket.

It was a rather tame ending to a storied Test career, however, for Philander (10) as he fell to a legside strangle off Wood to have South Africa seven down.

Fittingly for England, it was Wood who finished things off, taking the wickets of De Kock and Anrich Nortje either side of Beuran Hendricks being run out, to end with stunning match figures of 9-100.