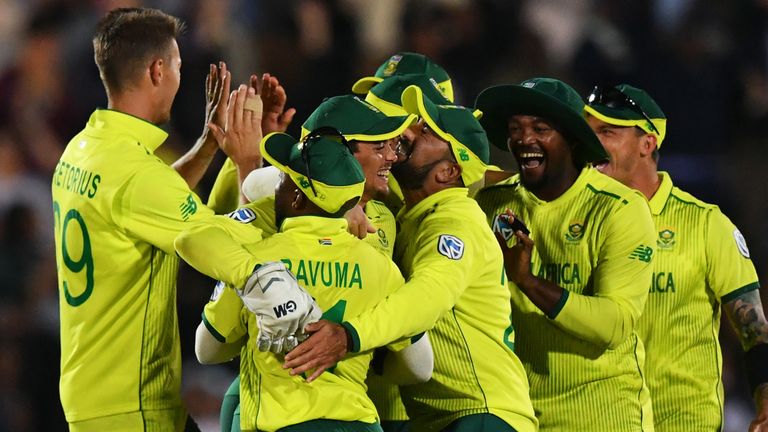 A blistering half-century from Jason Roy came in vain as South Africa beat England by one run in a thrilling opening match of T20I of the series.

The England opener hit 70 from 38 balls, reaching his fifty from just 22 balls, and when captain Eoin Morgan (52 from 34 balls) brought up his half-century with a six, the tourists needed just seven from seven balls.

However, the skipper was caught in the deep trying to clear the ropes and level the scores next ball and Lungi Ngidi (3-30) took two wickets in a brilliant final over before Adil Rashid was run out as England pushed for the two they needed to match South Africa's 177-8 and force a Super Over.

England will rue not being able to finish off the job, having got themselves into such a strong position, but it is South Africa who held their nerve to move 1-0 up in the series.

Moeen Ali bowled the first over of the match with just four singles coming from it, but the innings soon sparked into life as Quinton de Kock hit Tom Curran down the ground for consecutive boundaries before launching the next ball over extra cover for a huge six.

Curran was replaced by Mark Wood but he too went the distance and could have been taken out of the attack after starting with two high full tosses, the first was called a no ball with the next adjudged to have been just below waist-height. 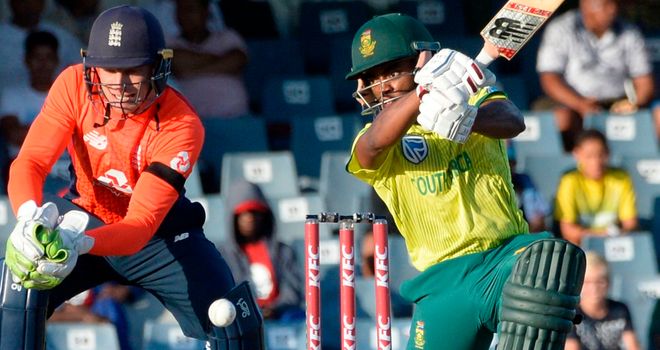 There was brief respite for England when Ali (1-22) had De Kock (31 from 15) caught in the deep in the penultimate over of the powerplay but the runs kept coming with Temba Bavuma, in particular, striking the ball cleanly and South Africa also benefitting from some less-than-impressive fielding.

Adil Rashid was bowling beautifully and though he had Rassie van der Dussen (31) lbw, only for DRS to save the batsman, albeit it for just a few deliveries as Ben Stokes (1-24) bounced him out in the next over.

Bavuma (43 from 27) was gone four balls later, sweeping straight to Ali at short fine leg to give Rashid (1-23) a wicket, two balls after being given a life when Joe Denly dropped a tough chance in the deep.

England had stemmed the flow of runs and Rashid should have had another wicket when Roy put down a skier after the leg-spinner had deceived Jon-Jon Smuts but the next scalp was Curran's (1-41), Chris Jordan taking a brilliant catch as the ball dropped over his shoulder to remove the dangerous David Miller (16).

Andile Phehlukwayo came in and hit his first ball for six but the boundaries were becoming less frequent, culminating in a brilliant last three overs for England. 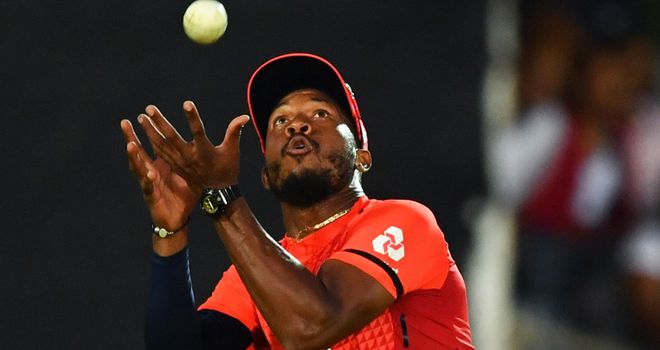 The first of them from Jordan went for nine, five excellent deliveries and one slower ball smashed over the legside for six by Phehlukwayo. Wood (1-32) followed that up by dismissing Smuts (20) in an over that cost just three.

It was left to Jordan to finish it off and he started by bowling Dwaine Pretorius (1) with a full, fast yorker. The left-handed Beuran Hendricks (0) got the same treatment next ball and while Dale Steyn (5no) was able to glance the hat-trick ball away for four, there was only one more run from the over as Phehlukwayo (18) was run out from the last ball.

England started fast in their chase as Jos Buttler (15) hit Steyn for back-to-back boundaries. He powered another boundary through midwicket in the next over from Ngidi but he went no further as he toe-ended a back-of-a-length delivery from Steyn straight to mid-off.

Jonny Bairstow got up and running with a boundary, but it was Roy who really put the pressure back on South Africa as he took 22 from the Smuts over that followed, including two sixes -the first of which Miller got his hands to as he fell over the rope.

Bairstow took on Steyn again and Roy put Ngidi back over his head as England matched South Africa's 68-1 at the end of the powerplay before the opener reached his half-century with four off Tabraiz Shamsi, one ball slower to the mark than Morgan's record. 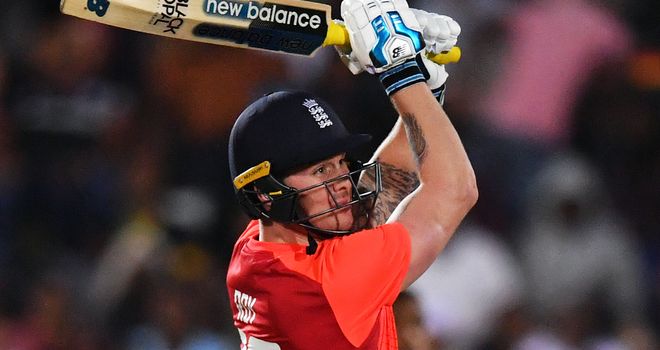 Phehlukwayo broke the 72-run partnership when he trapped Bairstow (23) in front with a rare quicker delivery and the wicket temporarily slowed England's progress.

There was still the occasional boundary and with six overs remaining, England were well placed with 50 needed and eight wickets in hand. Roy hammered the next ball from Hendricks for four but then managed to skew a slower-ball bouncer to short fine leg to end a fabulous knock and give South Africa an opening.

Denly (3) followed soon after, whipping the ball out to deep midwicket off Phehlukwayo (2-32) to bring Stokes to the crease as the required rate nudged up towards 10-an-over.

Morgan clubbed a couple of boundaries off Hendricks to make it 28 from 18 balls required for England. The tourists were slight favourites but just two came from the next three balls and when Stokes (4) holed out, mistiming a slower ball from Ngidi, the pendulum swung the other way.

That came down to 23 from 12 and after two singles from the first two balls, Morgan went four, four, six off Hendricks to take England to within touching distance of victory, bringing up his half-century in the process.

Just when it looked like it was game over, Morgan picked out long on with the last ball of the penultimate over - with Hendricks perilously close to over-stepping - to leave England needing seven from the final over.

Having taken two from the first, Curran (2) was caught in the deep next ball and when the fast bowler castled Ali (5) two balls later with a slower ball, England needed three from the last ball.

Rashid (1) could only squeeze the ball into the legside and Steyn calmly threw the ball in to De Kock to take the bails with the batsman well short as he tried to get back for the second to take the game to a Super Over.

The series now moves to Durban with England needing a win Friday's game take it to a decider at Centurion.

Watch the second T20I between South Africa and England from 3.30pm, Friday on Sky Sports Cricket.