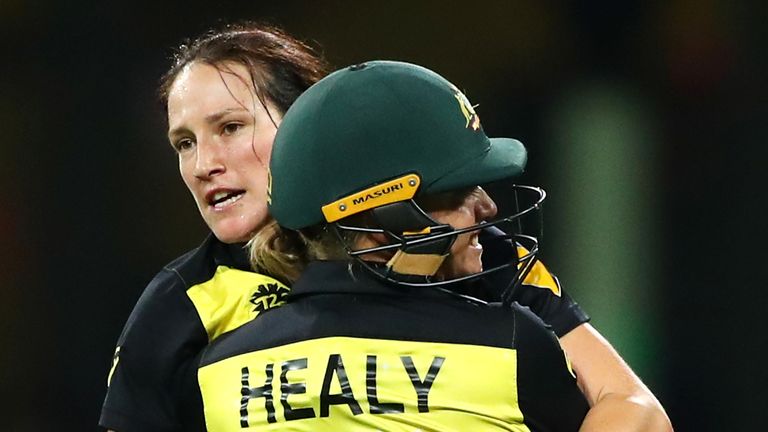 Australia's bid for a fifth T20 World Cup title in six years remains on track after a five-run win over South Africa in a rain-affected match, in Sydney.

The defending champions will take on India in Melbourne on International Women's Day on Sunday, after Harmanpreet Kaur's unbeaten side reached their first T20 final with the earlier abandonment of their semi-final against England.

South Africa restricted hosts Australia to 134-5 despite an unbeaten 49 from Meg Lanning as seamer Nadine de Klerk (3-19) picked up her second-best figures in T20 international cricket.

After a rain delay, the victory target was reduced to 98 off 13 overs - a total that seemed out of South Africa's reach at 24-3 only for Laura Wolvaardt (41no off 27 balls) to take the game down to the final over.

With 19 needed, spinner Jess Jonassen picked up the wicket of Chloe Tryon only for Wolvaardt to blast a boundary, but the task of dragging her side across the line proved just too tough.

South Africa closed on 92-5 and have still yet to reach a World T20 final after suffering their fifth defeat in as many games to Australia in the competition.

Australia celebrated fulsomely having successfully avoided the fate of England a few hours' earlier when Heather Knight's team, also runners-up in their group, were eliminated without being able to take to the field due to heavy and incessant rain.

But after a 50-minute rain delay the Sydney skies cleared and Australia - put in to bat - made a strong start, reaching 68-1 before South Africa stormed back to pick up three wickets for as many runs.

Alyssa Healy (18) was dropped behind by wicketkeeper Trisha Chetty off the spin of Nonkululeko Mlaba but failed to add any runs before flicking Ayabonga Khaka to Dan van Niekerk at midwicket, ending a 34-run opening stand with Beth Mooney (28). 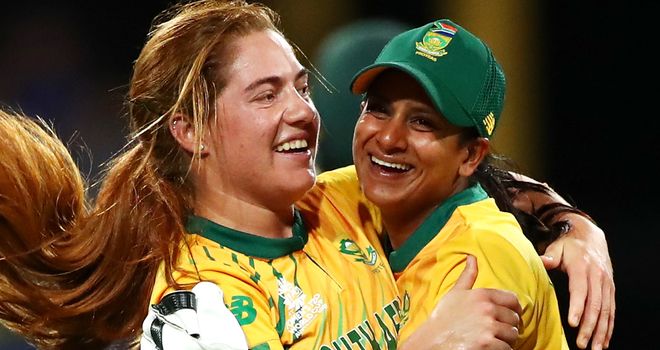 De Klerk, selected in place of the ill Marizanne Kapp, then sparked a collapse by bowling the advancing Mooney between bat and pad before Jonassen and Ashleigh Gardner fell in quick succession.

From 71-4 South Africa did such a good job drying up the runs that Australia went 38 balls without a boundary before Lanning got back into full flow.

The Southern Stars skipper took successive boundaries off Khaka in the 18th over after de Klerk had bowled Rachael Haynes (17) on the slog but finished one short of a fifty when she could only hit the final ball of the innings, a full toss from Khaka, for one.

The wicket was promptly covered with matting as the players left the field of play, necessitating a loss of overs and leaving South Africa chasing a revised target.

South Africa's only previous T20 semi-final appearance came in 2014, when they lost to England by nine wickets and openers Lizelle Lee (10) and van Niekerk (12) launched into their work.

Van Niekerk swept Sophie Molineux into the stands in the third over but the spinner struck back three balls later when Lee holed out at wide long on.

With four overs to go Australia, without the injured Ellyse Perry (hamstring), appeared in the box-seat with South Africa needing a further 43 to win only for Wolvaardt to drive two exquisite fours of Nicola Carey.

The right-hander, fresh from hitting an unbeaten 53 in South Africa's victory over Pakistan, smote the final ball of the penultimate over for six off Scutt's bowling.

But as the rain returned, Australia tightened their grip and Wolvaardt went down swinging - the bat slipping from her grip as she looked to launch one last blow of defiance.