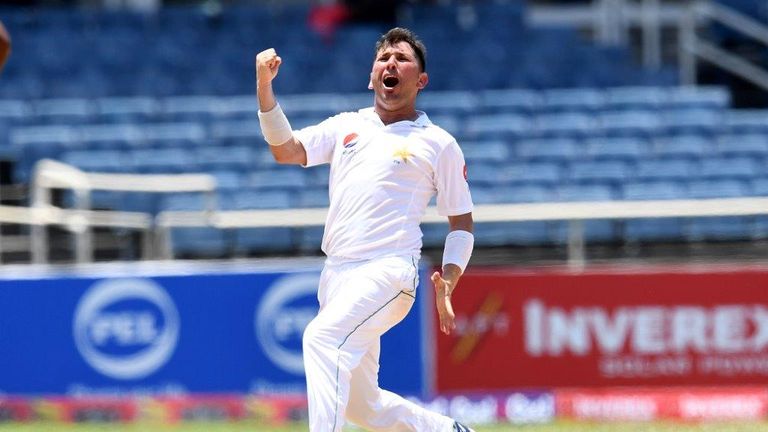 Yasir Shah completed a six-wicket haul to spearhead Pakistan's second-innings rout of the West Indies, as the visitors achieved a comfortable seven-wicket victory just after lunch on the final day of the first Test on Tuesday.

Trailing on first innings by 121 runs and resuming at the overnight position of 93 for four, the home side were dismissed for 152 after less than two hours' play at Sabina Park in Jamaica.

Needing just 32 runs for a 1-0 lead in the three-Test series, the tourists lost three wickets either side of the interval and it was left to captain Misbah-ul-Haq to end Pakistan's abysmal run of six consecutive Test match defeats with consecutive sixes off Devendra Bishoo.

Having taken the first four wickets late on the fourth evening, Shah was kept waiting for more success at the start of play on the fifth day as the visitors' faster bowlers took up the challenge of continuing the demolition job by taking the next four wickets.

However, the leg-spinner, who bowled unchanged from one end throughout the morning's play, was not to be denied another five-wicket innings haul.

He wrapped up the innings with the wickets of tail-enders Alzarri Joseph and Shannon Gabriel in the space of four deliveries in his 22nd over, finishing with the excellent innings figures of six for 63 and a match haul of eight for 154.

"It was tough for me during the last series in Australia and I was happy to get back among the wickets here," he said after receiving the man of the match award.

"Those rough areas on the pitch were very helpful to me and I hope I can continue with this sort of performance for the rest of the series."

Any expectation of Pakistan knocking off the required runs swiftly were ended by the dismissals of Ahmed Shehzad and Azhar Ali in successive overs. Shehzad edged a catch to wicketkeeper Dowrich off Gabriel while Ali played on to Joseph before lunch.

Younis Khan fell upon the resumption, leg-before to Bishoo, but with Babar Azam, the heir apparent to the departing star batsman looking on from the other end, Misbah heaved consecutive deliveries beyond the boundary to formalise the result and partially ease his own disappointment at being stranded on 99 not out in the first innings the day before.

"It's pretty frustrating because we need to see our young players learning and improving at the top of the batting order," said a disappointed Holder in the aftermath of defeat.

"Our bowlers tried really hard but we didn't help ourselves in the field with the number of chances that we missed."

Watch every game of the 2017 ICC Champions Trophy live as part of an action-packed summer on Sky Sports, starting with England against Bangladesh on June 1.