Watch the final of the Women's World T20 live on Sky Sports Cricket, Main Event and Mix from 11.30pm on Saturday. 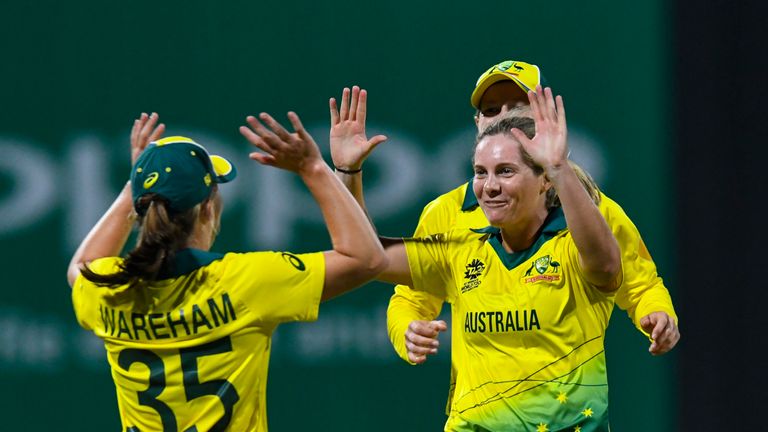 Australia are through to the Women's World T20 final

Australia thrashed holders Windies by 71 runs to reach the final of the Women's World T20 in Antigua after bowling the hosts out for just 71.

Alyssa Healy returned in style after a mild concussion in the final group match against India with her 46 the mainstay in Australia's innings of 142-5.

In reply, the home side crumbled in front of a sold-out crowd as a brilliant spell of bowling from Ellyse Perry saw her pick up 2-2 in two overs - Delissa Kimmince and Ashleigh Gardner also picked up two wickets apiece as the Windies fell well short of their target.

The home side claimed the early wicket they desired after opting to bowl first at the Sir Vivian Richards ground, as Beth Mooney tamely spooned Shakera Selman straight to mid-off.

On a pitch that saw runs hard to come by, Healy continued her impressive form in the tournament as she found boundaries more often than her team-mates and the opener shared a 51-run, second-wicket partnership with Meg Lanning (31).

However, after striking Afy Fletcher for back-to-back fours, an attempted sweep off the last ball of the spinner's over saw Healy loop the ball straight to short fine leg.

Lanning was twice fortunate to avoid losing her wicket early in her innings - getting back just in time to avoid being stumped and then run out in consecutive balls - but just as she looked to push on the Southern Stars' skipper was brilliantly bowled by Deandra Dottin. Britney Cooper pulled off a brilliant catch in the deep to get rid of Elyse Villani as Australia's innings looked to be tailing away but Dottin struggled to get her lines right, allowing Australia to seize momentum back as Rachael Haynes chipped in with an unbeaten 25 to set the Windies 143 to reach the final.

The hosts' chase got off to a poor start as Healy did brilliantly to run out Hayley Matthews before Perry picked up two wickets in two overs with Dottin and Shermaine Campbelle out cheaply.

Captain Stafanie Taylor looked to play the anchor role but with the run-rate rising she attempted to hit out and was caught at mid-off as the hosts looked all but out of the contest.