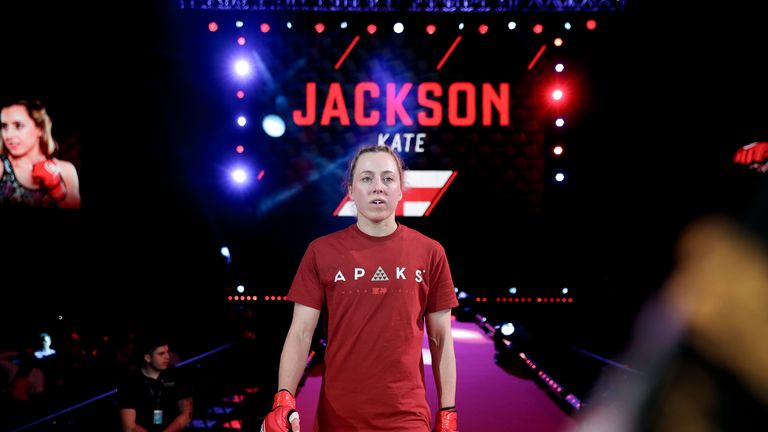 Kate Jackson faces her toughest test yet, when she faces undefeated Ilima-Lei Macfarlane for the Bellator MMA flyweight title in Hawaii (picture courtesy of Bellator MMA)

Kate Jackson will head into the lion's den to fight Ilima-Lei Macfarlane for the Bellator MMA flyweight world title.

The Cornish fighter will travel to Hawaii in a bid to become champion of her division but she faces the toughest test of her career in 'The Ilimanator' Macfarlane, who has yet to taste defeat (10-0).

Jackson (10-3-1) has already seen off Anastasia Yankova and Lena Ovchynnikova in her previous two fights, and the confidence will be coursing through her veins when she prepares to tackle Macfarlane, who is ranked pound for pound the best female flyweight in the world.

Jackson is softly spoken and mild-mannered, but when she gets in the Ballator cage then her fighting instincts take over.

With a brown belt at Brazilian jiu-jitsu and over 40 submission holds, Jackson uses her mixed martial arts skills to full affect.

Her title tilt against submission specialist Macfarlane has been 10 years in the making. She will feel that now is her time to shine in the spotlight.

"She's undefeated which means she's obviously doing something right," the 33-year-old told Sportswomen. "She's got a solid game, well rounded, she's a good wrestler, she's got a good submission game so it's not going to be an easy fight.

"We're both jiu-jitsu brown belts so we both have a decent ground game. I finish a lot of my games on the floor, it's just that I tend to finish with strikes whereas my opponent goes for submission finishes, but I do an awful lot of Brazilian jiu-jitsu competitions and I have over 40 submission victories myself in that environment so it's not something that scares me."

.@BellatorMMA star @kpajackson joined us in the studio to talk about her upcoming fight against Hawaiian world champion Ilima-Lei Macfarlane on 21 Dec – live on Sky Sports! pic.twitter.com/Mh9L0euuTt

Speaking to Sky Sports' Raz Mirza later, she said: "It's going to be a hard fight. I wouldn't expect any differently at this level. I'm confident in my ground game and I love to see how we match up."

Jackson has always had a penchant for Karate and Judo since an early age, giving up scuba diving to concentrate on her passion for mixed martial arts where she has been trained to compete as a professional in a growing sport.

"It was the idea of putting everything together and finding out if it all worked and what would happen that really appealed to me," said Jackson. "It was at that point that I found my current mixed martial arts gym 'Koncept' in Newquay.

"I think a lot of it for me is just tenacity; I like the idea of it and I fought hard. It was just amazing and it slowly snowballed from there really.

"I went from judo competitions in leisure centres to fighting in a fairly large show in Wales. My first fight lasted 48 seconds [against Kate Rennie] and I wasn't even sure it had finished.

"I suffered my first loss [to Hanna Sillen via a unanimous points decision], it was a lacklustre performance by myself. You either quit or you keep going and work on what your weak points are."

Jackson has been working with a sports psychologist in order to maximise her chances of success in the Bellator cage. She has been using her psychologist to prepare for what is to come when she travels to Hawaii to fight hometown girl Macfarlane.

The 5ft 6in Jackson also spoke about how pioneer Rosi 'The Surgeon' Sexton has been inspiration in helping her to get to the top of her division. She also added that the Bellator women's division is now among the best in the world, especially with the signing of Cris Cyborg.

Jackson added: "Cyborg brings a lot of eyes, a lot of attention. She's obviously one of the most famous female fighters in the world. She's really high level and I think she will do well under the Bellator banner."