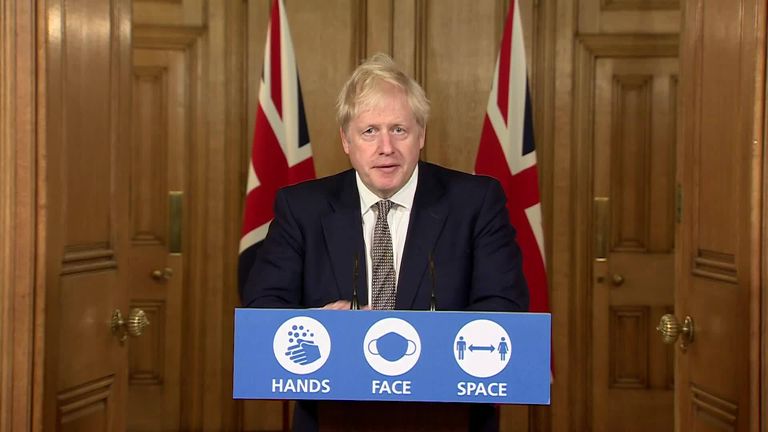 Premier League football and other elite sports will be allowed to continue during a four-week 'circuit break' lockdown which will start in England on Thursday.

They can continue due to the testing regimes in place for professional sportspeople, but amateur sports will be put on hold.

The EFL, women's football down to reserve level, and the National League, are all classified as elite sport and are permitted to continue behind closed doors. Asked if Premier League matches would still be played, Prime Minister Boris Johnson told a Downing Street press conference: "I can say yes to the Premier League. We will get through this. But we must act now to contain this autumn surge."

The EFL accepted a "difficult decision" taken by the government in a statement and acknowledged their national efforts in tackling the pandemic.

Gyms will be shut but people can continue to exercise for unlimited periods outdoors, either with people from their own households or on a one-to-one basis with one person from another household.

The measures, which will begin on Thursday and run through November until December 2, will see the closure of pubs, restaurants and non-essential shops. This will also see a nationwide ban on different households mixing inside homes, although schools, universities and colleges will remain open.

Cabinet Office Minister Michael Gove has told Sky News that the Government could extend the national lockdown if data shows the infection rate has not fallen enough.

The Prime Minister announced the new nationwide restrictions at a Downing Street news conference, at which he said "now is the time to take action, because there is no alternative". MPs are expected to vote on the fresh measures on Wednesday.

Sky Sports News has contacted the Department of Culture, Media and Sport and Premier League for comment following the announcement of a second lockdown.

Klopp: Premier League has proven it can be safe

Liverpool manager Jurgen Klopp welcomed the news the Premier League would be allowed to carry on.

Speaking after his side's 2-1 victory over West Ham, he said: "It is obviously what we wanted [football to continue] and I think we proved we can keep the bubble safe.

"Everyone had cases, that is the time we are in, but we could isolate these cases pretty quickly to prevent spread.

"I think it never happened at a training ground but it has happened when travelling, with international teams, normal life. I think we proved we can do it.

"And in a lockdown it is really important for the people that they can do things they like to do, and watching football is obviously something they like to do. I am happy we can continue."

The Football Association (FA) say they are awaiting further information before they can confirm how the restrictions may affect non-elite football across the country.

The Lawn Tennis Association (LTA) say they will "make a case" to the government for outdoor tennis activity for two individuals from different households to continue.

England Golf say they are liaising with the All-Party Parliamentary Group for Golf and "studying the detail" of the latest lockdown restrictions to establish how it affects their clubs and facilities.

Swim England chief executive Jane Nickerson has expressed her disappointment that indoor leisure facilities are being forced to close, and stressed the government would need to "dig deep" and provide even more financial support. "We have consistently made the case that aquatic activity is both safe and a lifeline for many people in such uncertain times and that leisure centres should therefore be considered an essential service," she said.

"Since the reopening of pools, leisure centres and gyms in July, we have seen that they are well-managed environments where the risk of transmission is low."

"Indoor leisure should have been made an exception. We're heading into dark nights, we're not in the same position now as we were in March. Indoor leisure is a safe place for people to go and keep fit."