Bundesliga games have had limited or no fans present this season anyway, with teams following local restrictions based on infection rates. But Wednesday's new measures are the first nationwide clampdown since the Bundesliga's two-month suspension when the pandemic began in March

The Bundesliga will have to play without fans again after the tentative return of spectators was cut short due to rising coronavirus infections in Germany.

Chancellor Angela Merkel and governors of the country's 16 states passed new restrictions on Wednesday in a bid to contain the virus, meaning professional football matches will have to be played without spectators starting Monday and for the rest of November. Amateur sports and leisure activities were suspended, with the exception of individual exercises.

"We must act, and now, to avoid an acute national health emergency," Merkel said, as she outlined the reasons behind closing restaurants, bars, clubs, cinemas, theatres and other leisure facilities for four weeks.

The Bundesliga has been playing with limited or no fans present this season anyway, with teams following local restrictions based on infection rates. But Wednesday's new measures are the first nationwide clampdown since the Bundesliga's two-month suspension when the pandemic began in March. 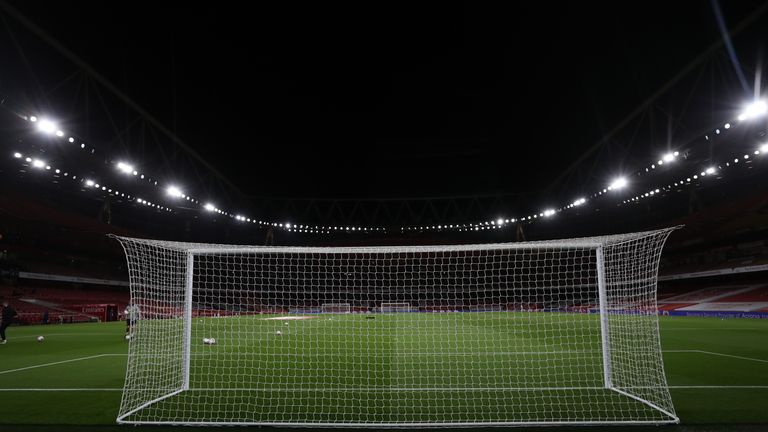 Premier League players are performing at a higher level without fans, according to sports psychologist Gary Bloom.

Borussia Monchengladbach and Schalke had already announced that their Bundesliga games this weekend will played without fans, while Borussia Dortmund's Champions League match against Zenit St. Petersburg on Wednesday would also take place in an empty stadium.

"We have to flatten the curve, to stabilize the rate of new infections so we can get them down again," Merkel said.

Manchester United say Old Trafford is ready to safely hold around 23,500 fans for matches in accordance with social distancing guidelines as soon as the UK government gives the green light for stadiums to reopen.

Plans for stadiums to be reopened in October were postponed by the government because of the resurgence in COVID-19 cases - leaving fans of all clubs uncertain when they will next be able to cheer on their team from the stands. No supporters have been allowed inside Old Trafford since United's 2-0 victory in the Manchester derby in March because of the pandemic.

Collette Roche, the club's chief operating officer, said rigorous plans have been put in place to make Old Trafford as safe as possible for fans when they are allowed back.

"We were really disappointed when the government decided not to allow fans back in the stadium in October because we've got everything in place to make sure we can do so safely," Roche told Sky Sports News.

English Football League chairman Rick Parry has written a new letter to the Government insisting the EFL does not have the power to prevent clubs from going bust and says it is now or never in regards to emergency funding.

Parry says EFL clubs "will require £400m of funding" from their owners to keep them in business this season, with fans still unable to attend matches due to the current coronavirus restrictions, making the financial situation worse for teams.

The letter, addressed to Oliver Dowden, Secretary of State for Digital, Culture, Media and Sport, also questions why £1.5 billion was given as a funding package to the Arts sector alone while lower-league football clubs continue to struggle.

Parry believes "we are at best being ignored...and at worst being victimised" and says while "Rochdale, Grimsby, Mansfield and Carlisle might seem an awful long way from Glyndebourne or the Royal Ballet, they are nonetheless equally important parts of our nation's heritage".