She has also helped to coach Wales' U19 and U20 teams, including at major youth tournaments. She works as Senior Sport Empowerment Officer for Stonewall, the charity that runs the Rainbow Laces campaign, which is supported by Sky Sports as a member of TeamPride.

Growing up, the only women I knew who were lesbian or bi came from sport.

As a teenager, I played both football and lacrosse, and met coaches at camps and at my club who were subtly out. At first, before I had even realised I was gay, there was a sense of intrigue and intense admiration - they had courage and self-worth and were quietly defying the societal norms of the times and just living their lives. I was seeing myself in them.

Having these role model women who loved the sports I loved went a long way towards the development of my own game. They were considered strong, powerful, and accomplished. They weren't really known beyond lacrosse, but within our community, they were respected figures.

What's great about lacrosse is that girls get to learn skills from senior players - the development camp and coaching systems are built on a desire to grow the game. That's one of the reasons I love coaching so much now. I've experienced first-hand how important it is for younger players to see that there are people like them who are successful in the sport.

By the time I reached my early 20s, I felt a strong sense of self but was acutely aware of the homophobia of people around me. It would keep chipping away at my confidence and knocking me down. It nearly killed me.

I was in a postgraduate pressure cooker, having got injured playing NCAA college lacrosse in the US. That meant competitive opportunities seemed to be behind me. I was playing casually but my mental health was poor.

I didn't even know I needed to rekindle my love for sport - but it happened anyway, while I was watching the 2011 World Cup. When Megan Rapinoe crossed for Abby Wambach to head her thrilling equaliser in the dying minutes of extra-time in the quarter-final against Brazil, the team spirit evident in the USA celebrations invigorated me. Sport had hooked me again.

I wanted that camaraderie back in my own life, so I went to reclaim it and vowed resolutely to be myself going forward. I picked up my lacrosse stick and hit the gym. I soon had a trial with Wales - and I regained the confidence that had been drained out of me. Less than a year later, I had a European Championships silver medal and the honour of being named Best Goalkeeper in Europe.

'The culture is crucial'

There's an inextricable bond between my lesbian identity and my relationship with sport. The pitch is a place to express my physicality and my personality away from societal pressures and the watching gazes that so many of us are conscious of in everyday life. I had to fight to win my pride as a lesbian and that spurs me on. There's a power there and only when I was able to harness it did my performance really take off.

The nature of competition means that there is sometimes very little tolerance for vulnerability. Injuries or struggles with mental health can be exacerbated when others lack empathy. For LGBT+ people, that feeling of being 'different' may be difficult to process just by itself, but individual circumstances and the way identities intersect can create a web of challenges.

Sometimes it can actually be other LGBT+ people who put up more barriers - I've had lesbian and bi coaches who would lecture players on resilience, and suggest any distress they felt was due to insecurities around their sexuality. Then there are the straight players who talk exuberantly about how 'we're not lesbians like that team' or laugh about how 'people think I'm a lesbian because I play sport'. I'm glad to say my own team-mates have been great allies; they demonstrate that in small ways but each one means a lot.

Rapinoe famously said last summer that 'you can't win a championship without gays on your team'. It was tongue in cheek but a lot of people misunderstood what she meant by that comment. She wasn't saying that lesbians like her were better footballers because they're lesbians. She meant that the most successful teams are those with cultures in which everyone feels comfortable to be true to themselves and each other. Of course, more people who are LGBT+ will come out within such an environment.

In any case, so what if a sport is 'full of lesbians'? What are you going to do - deny yourself or your child the opportunity to play that sport, to grow as a person, to gain educational and career opportunities, to build friendships? I've known the damage that can cause. When we run Stonewall Empowerment programmes, we talk about this question. I'm always really inspired to hear allies talk about how they are working hard to promote cultures of inclusion so that parents and children can see that sport is for everyone. We need to keep paying attention to this. 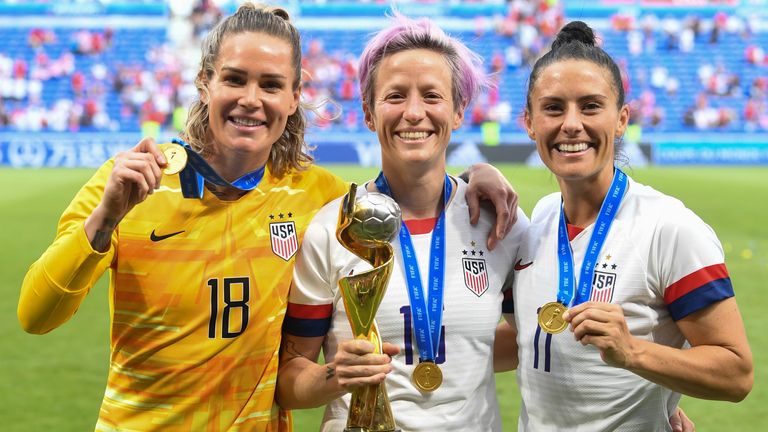 Rapinoe meant that the most successful teams are those with cultures in which everyone feels comfortable to be true to themselves and each other.

Erin on Rapinoe's 'you can't win without gays' comment

Women's sport in particular comes under intense scrutiny. As much as I love it, there's always been a weird dynamic of judgement involved. Sizeism is incredibly harmful, while standard-issue kits suggest there is a universal body type - I often wear 'men's cut' tops because they're baggier and more suitable for me than the women's clothing, for example. Is it too much to ask for a 'slim fit' and a 'loose fit'?

Even my position as goalkeeper often comes with an assumption - 'we'll just put the least interested, least conventionally athletic kid in there.' Why? The goalies should be the ones who want to be there! I was lucky to have two brilliant coaches when I was 13 who recognised my strengths and encouraged me. GK is my place even though I was a decent field player. Yet I've had to battle my entire career against people who come with that unconscious bias that goalies aren't 'real players' or 'real athletes', just because we're not sprinting all over the pitch. My skills are different, sure - but that's why I'm in this position. I'm sure these judgements have spoilt others' enjoyment or even led them to sever ties with the sports they love completely.

When I'm coaching any young player, I'm always thinking about the best ways to empower each individual to be their best. I've been fortunate in my international career with Wales to have coaches and team-mates who really understand the complexities of performance, and I've worked with some incredible sports psychologists too. Paying attention to nuanced layers and motivational factors is key to unlocking potential - and my lesbian identity is a big part of mine. This goes beyond sport and it's why I'll always, unwaveringly, fight for LGBT+ people of colour, my disabled friends who are LGBT+, and my trans siblings across society.

At this time, it's becoming clearer that coronavirus is far from a great leveller. Groups who experience poverty and discrimination are among those being hit the hardest during this crisis. For LGBT+ people, many are being forced into lockdown in households where it's dangerous to be themselves. I think back to places I've lived in the past and shudder to think where I'd be if I had to isolate with all the homophobia in those environments. Inclusive sports clubs are vital hubs for wellbeing because they provide us with friendship, safety, and all the benefits I've talked about here - but members cannot currently meet in person.

At Stonewall, we're working hard to build an even stronger movement for equality so that LGBT+ communities get the support they need now and we can create a more equal society as we come out of this crisis.

Sport has an important role in that. It's provided me with an outlet for growth. It's made me strong and healthy, both mentally and physically. It's shown me what hard work is and how to constructively handle adversity. It's given me confidence, happiness, and even a sense of purpose. I've made friendships, had career opportunities, and travelled worldwide.

Whether you compete at an elite level or use the qualities gained from sport in other parts of life, it's a gameplan for self-improvement - and everyone should be encouraged to play.