As Sport and Recreation Alliance CEO, Lisa Wainwright is an influential voice for the sector. She talks to Sky Sports about lesbian visibility in leadership, beating cancer, and the opportunities being open presents

When Lisa Wainwright is invited to speak at conferences as one of the UK's senior leaders in sport, she values the chance to be visible.

The CEO of the Sport and Recreation Alliance ensures event planners appreciate that. "They don't get the stock picture of me in a suit that they want," she says. "They get one of me, my wife Karena, and our daughters in a pool together as a family."

Wainwright used the picture on her introduction message when appointed a year ago to lead the Alliance, which is the representative body for over 300 UK sports and activity organisations including the FA, the ECB, and the RFU. The Alliance's mission is to create a more active nation; in her message, Wainwright reminded members that taking "the opportunity to think differently" will help to achieve that. Her photo choice is part of her strategy.

With Lesbian Visibility Week raising wider awareness of workplace inclusion for women, she wants those at the highest levels of sport to pay attention. "Everybody understands the importance of equality now," she tells Sky Sports, "but there are people on various boards who are lesbian and gay - and in some sports, none of them are out. Why is that? Then you go to senior management level and it's the same, but there no one is even talking about it. There's clearly an issue going on in some of the organisations. That's a challenge." 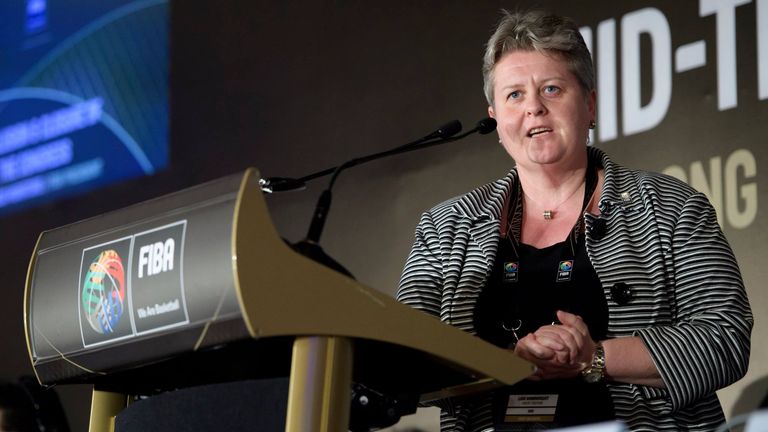 For ages, we were all too scared to say 'girlfriend' or 'boyfriend' and just said 'partner'. It was classic.

Wainwright makes the point because, as one of very few out LGBT+ figures in the top echelons of sport, she is often asked how boards can be proactive on diversity and inclusion. In her previous CEO roles at Volleyball England and British Basketball, she made progress in a male-dominated landscape through her own authenticity as much as anything, but it wasn't until a Rainbow Laces Summit event at Old Trafford in 2017 that she first spoke in public about being a lesbian.

"I've been out for years and not had any issues but I'd never been asked to discuss that on a platform before," she explains. "Going forwards, I'm committed to doing more on LGBT+ inclusion. My board knows that and supports me. It's about using my network, and encouraging others to be proactive. It's crazy for someone to get a job in this sector and still feel they can't talk about their boyfriend or girlfriend.

"As a campaign, Rainbow Laces has been great but it mustn't be a tick box. It should be used to better understand inequality and homophobia and then challenge behaviours. You only have to look at men's football - it's embraced the campaign massively but there are still huge issues there."

Wainwright is speaking from the family home in Northamptonshire, where she is currently 'shielding' due to being one of around 1.5 million people in the UK who are considered extremely vulnerable during the coronavirus pandemic.

She had accepted the job at the Alliance last March and was just about to start when she was diagnosed with breast cancer. She carried on working, documenting her experiences on YouTube, and received the all-clear last month after successful chemo and radiotherapy. Her immune system will need six to nine months to recover, which means all non-essential contact with others - including family members - must be avoided.

"I sleep upstairs, the kids sleep downstairs. No one is allowed into my office. Karena and I sit at opposite ends of the table for meals. We can only blow each other kisses." They have been together for 18 years and were engaged for five before Wainwright learned her cancer could be stage four. "We had a mild panic and got married quickly, at a hotel in Norfolk that we all love."

There were "ups and downs" during treatment but she now has "loads of energy". Her work with the Alliance is keeping her focused. "The place that sport has in society has never been more important than at this moment in time, not just physical health, but mental, social and community wellbeing."

Wainwright's coming out story began when she "realised I was a little bit different" while still at school. There was a crush on a PE teacher, and later in sixth-form college when she was netball captain, a relationship with the hockey captain. She trained to be a PE teacher herself at Warwick University, but reconsidered this as a career partly because society was becoming increasingly anti-gay. "Section 28 came in in 1988. The impact of that was there was no way I felt I could teach. If a student came to ask me about sexuality, the law said I couldn't even talk about it. I knew it was ethically wrong."

She became a development officer for netball instead and took on various other sports roles which led to her being recruited onto the governing body team at Sport England. Her work on safeguarding was pivotal in the establishment of the Child Protection in Sport Unit and after a stint back at England Netball, she returned to Sport England as Head of National Sport.

After her appointment as Volleyball England CEO in 2008, she became involved in more conversations at an international level, which brought with it greater insight into sexism and discrimination. "Understanding the effect of conscious and unconscious bias in the UK is one thing, but how you interpret that internationally - where the power relations are often much stronger - is very different.

"I've been to forums and congresses where I'm not known to be out. I remember attending one in Finland where I was there as secretary. At drinks one night, the chairman of another country's organisation kept asking me about my husband. I kept saying, 'no, I don't have a husband' and referring to 'my partner' but he still kept saying 'husband'. Eventually, I just said 'she's a she' - and he couldn't get his head around it. He never spoke to me again. I came away thinking should I have done things differently? It was a shock."

She feels that experience affected how she reacted in a later situation. "I was asked to go to Lausanne and was offered a job which would have been a great career move. But Karena was enjoying working in the police and neither of us wanted to leave England to live in Switzerland. I mentioned 'my partner' but the federation president - a very powerful guy, in his 70s - said 'bring your husband, he can work for me, I'll give him a uniform, he can do security' and all this. And I never corrected him."

Later in the taxi to the airport, she chided herself. "I said 'Wainwright, you can't live with yourself on this' so I emailed him saying 'thank you so much, sorry I can't take the job, and yes, it was the uniform that attracted me to my partner. Please see attached picture of my wife'. He replied within two minutes - this is the president, remember - and just wrote 'no difference, she can work for me'. It taught me a lesson because I'd judged him. We're all learning!"

Since then, and often by way of the picture she sends across, Wainwright has found the social conversations beyond the ins and outs of sports governance flow more easily. "I've been speaking to guys who are senior executives and they've asked me about my kids. I explain we became parents through IVF and they have a lot of questions," she laughs. "Also I can often tell they're petrified about saying something wrong! But if you are open, it quickly becomes just a natural thing to talk about. For ages, we were all too scared to say 'girlfriend' or 'boyfriend' and just said 'partner'. It was classic."

'Look outside your sport'

She's encouraged by initiatives such as the Athletics Pride Network which has been backed by UK Athletics' inclusion lead Donna Fraser - "she's a great advocate" - and wants more NGBs to get involved with Pride events, something she championed in her Volleyball England days when the London Spikers club first marched at Pride in London. Wainwright has also been involved in projects in Namibia and Zambia and would like to see sport play a proactive role in bringing about change on LGBT+ inclusion around the world.

What could her fellow leaders be learning now, during the shutdown? "The one thing that sport does really poorly is we keep within sport. Rarely do we go outside and start to work within different diversity fields, as it were. What I'd like chief execs and senior managers to think about - particularly if they're LGBT+ themselves - is how to utilise a broader network and bring the sectors together. They don't need to be separate and it's really sad that they largely still are."

Visibility isn't just about individuals, insists Wainwright, and she stresses the need to be patient with those struggling for self-confidence. Policies and charters are visible too and the more robust and inclusive they are, the clearer the signals sent out. But authenticity counts for so much on a human level. "Claire Harvey was captain of the women's sitting volleyball team at the London 2012 Paralympics, and later was awarded an MBE. She told me she came to our sport because she knew an out lesbian was chief executive, so that reinforced to me what visibility can help to achieve.

"The family photo I use is a subliminal way to do that, I suppose. It's important people understand we're not just CEOs, we're human beings. You should be able to be a human being in your work life."