Life Lessons Through Sport: Bethany Hamilton on surfing after a shark attack

Bethany Hamilton found a passion for surfing at a young age and was on the path to global success, before a shark attack when she was just 13 changed everything in an instant.

On Sky Sports' Life Lessons Through Sport, she explains how she dealt with the trauma and had the strength to go on and achieve the goals she had set herself.

"You could say that the ocean was my version of the playground," Hamilton told Sky Sports.

"My parents had me on a [surf] board before I could walk, and I was just hooked on riding waves and being in the water. I was always asking my parents to take me surfing before school and I'd turn up with wet hair and sandy feet! I was totally hooked.

"By the age of 10, I had high expectations and goals for myself. I wanted to be the best and push women's surfing.

"I was a dreamer, but more than that, I was a doer," she said of her younger self.

"Thankfully I had the support of my parents, the right environment and the ability to be very teachable and want to push myself."

To live an honest life is a gift to the world around us. Honesty takes courage. Be courageous.

With her work ethic and talent, Hamilton had everything that she needed to race towards the lofty goals that she had set herself. She gained her first sponsorship deal at the age of nine and as she continued to put in the hours, her goals were edging closer by the day.

However, on October 31, 2003, the course of her life was changed forever. It was on that day when a normal surf turned into a living nightmare, and a 4.3m tiger shark attacked her.

Hamilton's left arm was severed just below the shoulder and although she does not like to speak about the day itself, she is open about the days after and the approach that she took to her recovery.

"During that time, I could have been very angry, down and depressed about everything," she said.

"I was in a place where the world was my oyster and then I felt like all of that had been flipped upside down and taken away from me... my arm was gone. It was heavy and it was overwhelming.

"At the same time, there was a sense of peace that I had. I trusted that God had my life in his hands and on top of that, I was just grateful to be alive." I think that when we face hard times, we really need to find the things to be grateful for. Everyone needs to dip deep, cling to the things that are important to them and hang in there. That was what I did during that time.

During her recovery, Hamilton had the opportunity to speak to Mike Coots, a fellow surfer who had lost his leg to a shark, and he spoke to her about how he had learned to surf again. Hamilton said that hearing from Coots was like a 'lightbulb' going off and allowed her to think that she would be able to surf again too.

Once that lightbulb was switched on, it took Hamilton less than a month to get back out in the water, and just three months to compete in a surfing contest again.

Mike Coots - my first “hint of hope” that surfing w/ one arm was possible. Coming from Mike it meant A LOT because he learned how to surf w/ his prosthetic leg after suffering his own limb loss from a shark attack.

To this day, she remembers her first surf after the attack vividly and her words show what a powerful experience it was.

"I remember that I was down watching all of my best friends surfing - they were out doing a surf team practice that I would have normally been a part of," she said.

"I was on the beach with my coach and the waves were just perfect... it was torture for me to just watch, so I called my family and asked them to bring my board down. It was the day before the doctor said I was allowed to, but it was close enough!

"It was a really special day, to have all of my family, friends and the community of people around me.

"I stood up on my third wave and rode it all the way to the beach, it felt like one of the best rides of my life. I was overwhelmed with joy and tears of happiness." Being back on a board propelled me forwards and I thought if I could surf, I could do other things too. It spurred on the unstoppable me.

At such a young age, Hamilton approached her return to the ocean with incredible maturity. She was able to manage her thoughts rationally and not let something so disturbing as a shark attack, inhibit her from moving forwards.

"My love for the ocean and surfing outweighed my fear of sharks," she added.

"I also knew that it [being attacked by a shark] is such a rare thing to happen and there are other normal things like driving in a car, which can be more dangerous.

"So I had that mindset. I didn't want to let a fear of sharks stop me from getting out there. Then there was just the love and the passion which propelled me forwards.

"Once I got up on my first wave, there wasn't any turning back. I didn't know what my future held when it came to surfing, or that I would become one of the best female surfers in the world, I just had that willingness to try." 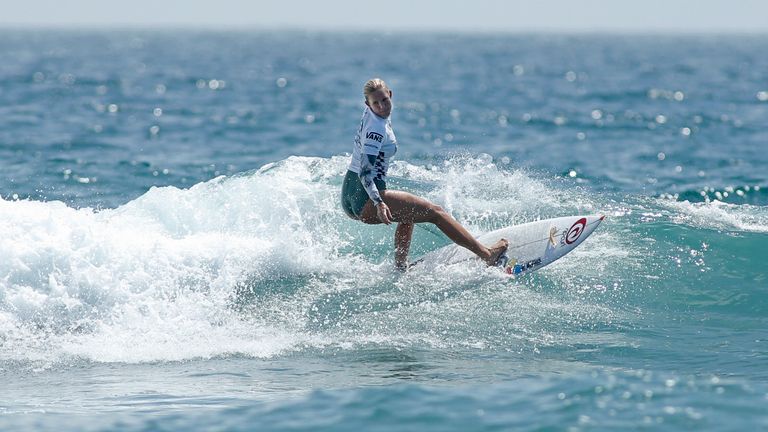 I think sometimes what we need is that willingness to try. I don't need easy, I just need possible.

'Possible' for Hamilton meant changing her whole approach to surfing, everything from adding a handle to her board to her positioning and paddling. She approached every challenge head on and would not take no for an answer.

"A quote I love from Gabby Reece is, if I flip me, I flip my environment," Hamilton said.

"Our environments aren't ever going to be simple and easy, but if we flip how we think about them, we can be truly unstoppable and accomplish even more than we dream."

Many individual athletes, whether they have been through the adversity Hamilton has or not, are often lone rangers and quite singular in their pursuit of excellence. However, Hamilton is someone who seeks others' assistance and always advises others to follow this approach.

"I don't try and go it alone... I find the right people to be with me on the journey," she says.

"This life isn't easy and when you try and do it by yourself, it will get lonely and be scarier than if you have people to support you."

Naturally, Hamilton does not seek the limelight but because of what happened to her, she has chosen to always put herself out there to try and help others.

A Hollywood movie - Soul Surfer - released in 2011 documents her story, her own documentary film, coaching programmes and featuring on Life Lessons Through Sport, are undertaken in order to reach as many people as possible.

"I recognised that Soul Surfer would be being played in hospitals around the world and could help young kids going through tremendous challenges.

"My natural state is someone who doesn't need to be in the spotlight or have attention on them, I'm happier sitting in the background and doing my thing, but I realised that I could impact people.

"I'm excited to keep on helping people and putting out messages of hope for people around the world facing hard times. It's really fun to wake up with a purpose and have meaning to your life."