Team Europe secure Mosconi Cup glory over USA as they retain title to take the overall score of the annual transatlantic 9-ball pool event to 14-13 in their favour; they will head to Las Vegas next year where they will be aiming to make it a hat-trick of wins - it's live on Sky Sports! 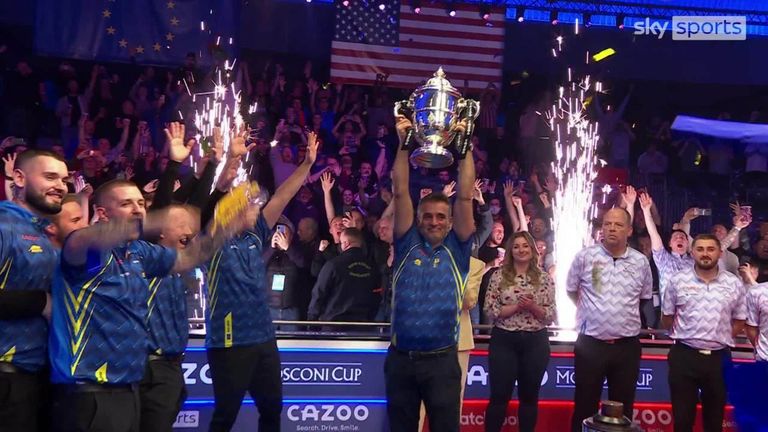 Team Europe retained the Mosconi Cup with a superb 11-6 victory over USA at Alexandra Palace on Friday.

The men in blue turned the contest around from 5-3 down to win seven out of the next eight matches and complete a brilliant comeback.

Europe have beaten USA 11-6 to win the 2021 @CazooUK #MosconiCup 🔥@killerfillers with the final point, beating SVB 5-3 to seal the title 👏 pic.twitter.com/0zgUt107iQ And in another dramatic encounter, the contest went to a deciding rack in which the European pair cleared up, despite a few nervy moments, to move on the hill overall.

Shaw and Woodward returned to the baize to face each other in singles action with 'The Kentucky Kid' all too aware of the lethal Scot, but the two-time MVP kept his cool to land a superb 3-9 combo and seal a huge 5-2 victory to reduce the deficit to four points.

Filler with the 2-9 carom to level the match at 2-2! Game on..#MosconiCup pic.twitter.com/RjSf45q6KP

However, it was left to Filler to supply the clinching point for Europe beating Van Boening 5-3 to seal the title for the second successive year.

Shaw's week of two singles wins and three doubles wins saw him pick up the MVP award for the second year in a row: "It feels amazing, hats off to the team, we showed a lot of heart over the last two days. To win MVP for the second time feels incredible"

He added: "I'd advise all European fans to make the trip over to the States and give us as much support as possible next year!"

The Mosconi Cup will now head back stateside in 2022 at Bally's Hotel & Casino Las Vegas on November 30 to December 3 - live on Sky Sports.

Matchroom Multi Sport managing director Emily Frazer said: "We're delighted to be taking the Mosconi Cup back to Las Vegas for the first time since 2019.

"The American crowd brought the heat last time around and spurred their side on towards victory. I cannot wait to see what they bring in 2022."

For those on the move, we will have next year's Mosconi Cup covered via our website skysports.com/more-sports, our app for mobile devices, or our Twitter account @skysportspool for latest news and reports.