Mosconi Cup: Team Europe whitewash USA 5-0 to close in on retaining the title

USA captain Jeremy Jones makes critical error in dramatic final rack against David Alcaide; The American asks for the cue ball to be cleaned, only for the time extension to run out and a time foul called, leaving the Spaniard to clear up the remaining four balls left on the table

Team Europe put in a dominant display to whitewash USA on the third day of the Mosconi Cup to take a 9-5 lead going into the final day of action at Alexandra Palace in the race to 11.

Jayson Shaw kept up his 100 per cent record in singles action by dispatching the USA's Chris Reinhold 5-2 to open the session.

The Scotsman then joined forces with Joshua Filler to defeat Skyler Woodward and Tyler Styer 5-2 to put Europe ahead.

Eklent Kaci delivered a huge European point against Shane Van Boening coming from 3-1 down to defeat the USA vice captain 5-3. 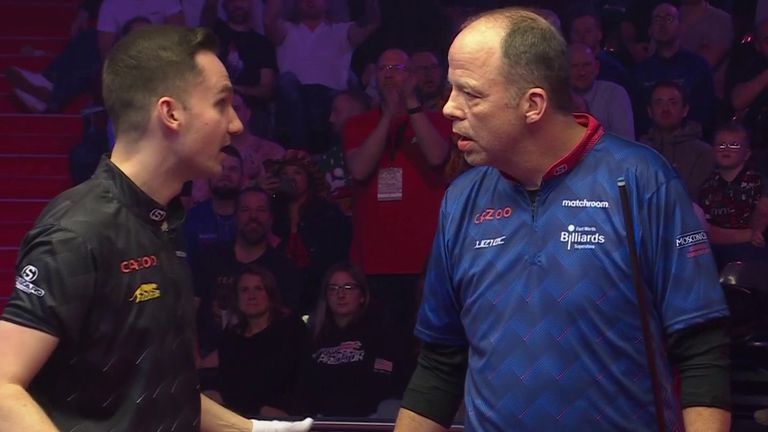 World Champion Albin Ouschan and David Alcaide then put on the performance of all performances against Van Boening and Styler to clear up for a 5-1 win.

Alcaide completed the whitewash session for Europe against USA captain Jeremy Jones to wrap up the evening in dramatic fashion.

Both teams know the clock never stops for cue ball to be cleaned, other than in exceptional circumstances out of the players control. Gutted for JJ as it was madness out there but lesson learned!
Never keep your eye off the shot clock 🥶 https://t.co/1ztLzr5epH

Jones led Alcaide at 4-3 when the Spaniard forced a final rack which is when one of the racks of all-time unfolded.

Jones and Alcaide were locked in an intense safety battle with the experience of one pocket and three-cushion on strong display from both players when a fatal error was made by Jones.

With only four balls left on the table, the American asked for the cue ball to be cleaned, only to run out of time with a time foul called by referee Marcel Eckert giving Alcaide ball in hand to secure Europe's 5-0 session win.

"The first two days were rough. We got schooled. They showed us how to play smart and how to play with heart, so we had two reality checks on day one and that wasn't enough. On day two, we got away with it by winning the last match. From there, we took over momentum, we are very relieved and very proud," said Alex Lely, Europe's captain.

"The commitment and not taking anything for granted. There was a realisation that the Mosconi Cup is a different atmosphere. It's about bottle, heart, and courage and doing it when you're out there and being ready to get out in the arena. And if you're not ready, everyone can get caught by the pressure.

"I want them to be clinical and disciplined and get the job done."

Watch the final day of action from 6pm on Sky Sports Arena. For those on the move, we will have the Mosconi Cup covered via our website skysports.com/more-sports, our app for mobile devices, or our Twitter account @skysportspool for latest news and reports.